Saturday classes will not meet the week of Spring Break

Due to the Covid-19 pandemic and physical distancing requirements, yearly showcases are suspended until further notice. We apologize for this inconvenience. The 7th annual Student Showcase, titled “The Greatest Showcase”, was a hit! It was an evening of unadulterated creativity and artistry on display. Below are the student submissions along with a collection of highlights from the event. Enjoy!

The Image Editing category is a summary of Professor Richard Joyce’s DIG 2109, GRA 2150, and GRA 2156 classes, which teach Adobe Photoshop and Adobe Illustrator. In these classes, students explore the capabilities of photo editing software.

In Digital Photography II, students expand their skills while exploring areas such as night photography, scanography, and black & white photography.

In Dr. Gregory Johnson’s GRA 2120: Page Layout and Design class, students learn the basic principles of successful graphic design such as hierarchy, Gestalt principles, and choosing typography, all while exploring Adobe InDesign. Students start with a simple, one-page design and work their way up to creating their portfolios as their final project.

As part of Dr. Gregory Johnson’s DIG 2940C: Digital Media Practicum and Portfolio class, students create a brand concept and a 10-piece design set. Throughout this project they learn how to follow branding identity guidelines and consistency in design.

In Dr. Gregory Johnson’s DIG 2000C: Introduction to Digital Media class, students created audio stories using advanced audio recording equipment and software such as Adobe Audition. In addition to their own voices, they supplemented their stories with sound effects, music, and other voices. See the submissions below.

Jordan Watson – “The Time in Between”

In Dr. Gregory Johnson’s DIG 2500: Fundamentals of Interactive Design, students are introduced to interactive media, user-interface design, and instructional design. A main focus of this course is developing approachable, ‘user-friendly’ media. This category is divided into two subcategories: Prototypes and Web.

In Dr. Gregory Johnson’s DIG 2030C: Digital Video & Sound class, students learn how to capture and edit video using state-of-the-art hardware and software. Some students enter the class never before having held a camera. Their final project is to write, record, and edit a short film in small groups.

“PBJ for a College Student”

“PBJ for a Single Bachelor”

“To Brie or not to Brie”

Heaven Keller – “Getting to Know You”

Mia Torres – “Getting to Know You”

The Advanced Video category is the result of students working together in groups, often with very limited resources, who have produced top-quality short films using advanced editing and videography techniques.

With the Special Recognition category, Dr. Gregory Johnson wanted to recognize students whose work may not have been awarded in other categories, but whose improvement in the quality of work and dedication to their courses was exemplary and worth a moment of recognition. In Richard Joyce’s Imaging and Illustration classes, students are expected to use Photoshop and Illustrator to create beautiful works of art.
See full album here

In Dr. Johnson’s Introduction to Digital Media class, students created audio stories using Adobe Audition. They utilized music, sound effects, their own voices and voices of others to enhance the project. Please note that some stories are very personal and may be difficult for some listeners.

Philip Wilson – “Back to School”

Hannah Spivey – “Getting to Know You”

Video Lighting: “A Slip of a Tongue”

Students in Lighting for Cinematography utilized the lighting techniques showcased in classic Film Noir movies. Here is their submission.

Students in Digital Audio Production used Adobe Audition and Adobe Premiere Pro to remove dialogue from scenes of their favorite movies then replace it with their own voices. See the result below.

Students in Digital Audio Production used Adobe Audition and Adobe Premiere Pro to remove dialogue from scenes of their favorite movies then replace it with their own voices. See the result below.

Students in Digital Audio Production used Adobe Audition and Adobe Premiere Pro to remove all sounds from scenes of their favorite movies then replace them with their own voices and sound effects.

Students in Digital Audio Production used Adobe Audition and Adobe Premiere Pro to remove all sounds from scenes of their favorite movies then replace them with their own voices and sound effects.

Featured below are submissions of students who showed excellence in image editing and compositing.

Featured below are submissions by Sara Robillard and Jacob Rousseau who showed excellence in creating multiple print designs. We posted our showcase photos on Facebook. Please take a look here. Thanks Santiago and Justin for taking these. Great work!

Bryan’s powerful story of hurt and healing won 1st place in the category of Audio Editing.

Macy Foster – “Think of a Number”

The 4th Annual Digital Media Student Spring Showcase was a huge success thanks to our wonderful lab assistants, professors and volunteers! Below are the submissions for the 2016 Showcase.

“The Picture Adventure” by Lewis Jones

“Surfs Up” by Camry Brewer

“My Dad” by Gregory Leon

“Why College?” by Camry Brewer

“Why College?” by Marnie Villanueva

“Why College?” by Kristin Reiher

“Why College?” by Daisha Roberts

“The Exchange” by Aaron Venrick-Ross

“The Assumption” by Andrew Gleckler

“The Hamburglar” by Brittany Baggett

“The Laptop Thief” by Ian Jackson

Digital Media has once again put on a successful Spring Student Showcase. Select one of the categories below to see the amazing work our students submitted.

“A day at the Circus” Cassandra Ballard

“Raining Outside” by Victoria Longoria

“I remember” by Cassie Conway

“Why College?” by Jeanne Wagner

“I Wonder” by Kayla Valle

“Lost in Time” by Victoria Longoria

Spring showcase for 2014 was very well attended. Here are some of the highlights from each category

Polk State College Digital Media student Drake Sholar and his brother Dirk directed, produced and edited a short film about two boys who hire a zombie butler. They also play the role of actors in the short film.

The movie won best prize in the film category at the Polk State College spring showcase 2014.

Polk State College Digital media student Jessica Jordan-Muniz creates a beautiful stop-motion animation film about the importance of mothers, and how much her own mother means to her.

Polk State College Digital Media student Gregory Gomez created this video to promote his GoFundMe page. He discusses his lifetime wish to go to Hillsong College in Australia to study music. He also explores his life-long love of music and a plea for a financial help to pay for college.

“Will You Speak His Name?” Music Video – Jayfem Santana

Ever wondered what ants do when no one is looking? Well, Polk State College Digital Media student Conrad Berganza gives us an animation about what ants really do.Take a look.

Polk State College Digital Media student Juan Santana made a short ad about that teaches a valuable lesson about homework. Take a look.

Polk State College Digital Media student Randy Penird puts together a video of his classmates, asking them the question “What was your biggest life lesson?”

https://vimeo.com/95779407
Conrad has always shown an interest in ants, bugs and creepy crawlies. In this video, he envisions the life of an ant. Check it out!

Employees for Polk State Corporate College visited Fantasy of Flight during a team-building exercise and took on the Ropes Course challenge. Students from the Digital Media Technology department of Polk State College took pictures and captured footage of the event. Two weeks later, they set the whole thing to music. Conrad Berganza edited the final product. He along with Ashley Bramwell and Robin Jenkins also served as videographers. Here are the results. Enjoy!

This mini-documentary is a class project headed by Vernon Aguirre for DIG2284C Advanced Digital Video and Sound taught by Joseph O’Brien. Vernon interviewed Chuck Wood, a paraplegic rugby player, about his life and optimism. Annalisa Harris served as the cinematographer. They used equipment provided by the Digital Media Department of Polk State College along with a Canon 5D Mark II that Vernon owns.

Be sure to check out this video below. It is only a few minutes long, but well worth your attention.

James’ dad owns a gym. For a class project, he worked with class mates and came up with the following 30 second ad to market it. He learned his video editing skills in an introductory class (DIG2030C Digital Video and Sound) taught by Gregory Johnson at Polk State College. Check it out.

Heroes of the Asylum

Justin Rheiner creates a music video for his buddies using skills learned at Polk State College in DIG2030C Digital Video and Sound. The video was created with Adobe Premiere Pro CS6. Footage was captured on a Nikon D80 and submitted as a final project during the fall semester 2012. The class was taught by Gregory Johnson.

For a class project in DIG2030C, Annalisa and classmates perform “White Christmas” classic during the Christmas holidays of 2012. Check it out.

For a class project at Polk State College, James Berto interviews his sister, Revelina Berto–a trained, award-winning kick boxer. The video showcases her skills and motivation for the sport.

James took a digital video and sound class (DIG2030C) taught by Gregory Johnson so he could learn to capture and edit video during the fall semester 2012. This video was his final project.

Conrad Berganza, Ashley Bramwell, and Tracy Sloan collaborate to create a short ad about college. They undertook this project as part of the final requirements in DIG2030C Digital Video and Sound at Polk State College. The class was taught by Dr. Gregory Johnson.

Students in DIG2284C Advanced Digital Video and Sound worked with Professor David Deborde to produce the following movie scene from Emmy’s Revenge. Two Canon T3i’s, a Tascam DR40 and some Wescott lighting was used to capture footage, sound, and provide lighting respectively. Carleigh Wallpe, Janeli Delgado did most of the editing and both received assistance from friends and classmates.

Prior to shooting, they did script breakdown, created a budget and shooting schedule, and held rehearsals and an audition for the main actor and actress in LTB 1308, our new studio. They used equipment provided by the college for the entire production.

The finished product is still in progress, but looks very good so far. Take a look!

Travis Watson was interesting in making better videos. He took a class, DIG2030C Digital Video and Sound, taught by Dr. Gregory Johnson at Polk State College in Lakeland, FL and learned to use Adobe Premiere.

One his buddies was interested in doing a music video, so Travis took on the challenge using his newly gained skills. He submitted this video (Say the Same) for his final project.

Carlos Lugo took an introductory class to digital video and decided to make an ad on behalf of Alzheimer’s patients. He used his family members to play various roles and came up with this ad. Take a look! 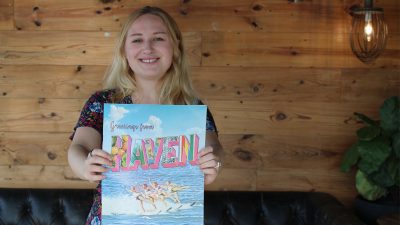 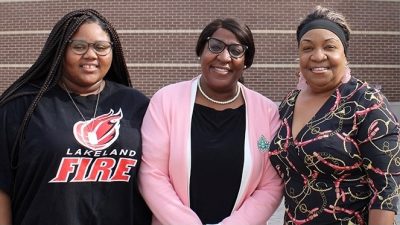 Katelin Downing is pursuing an Associate in Science in Digital Media Technology degree at Polk State College, where she now…