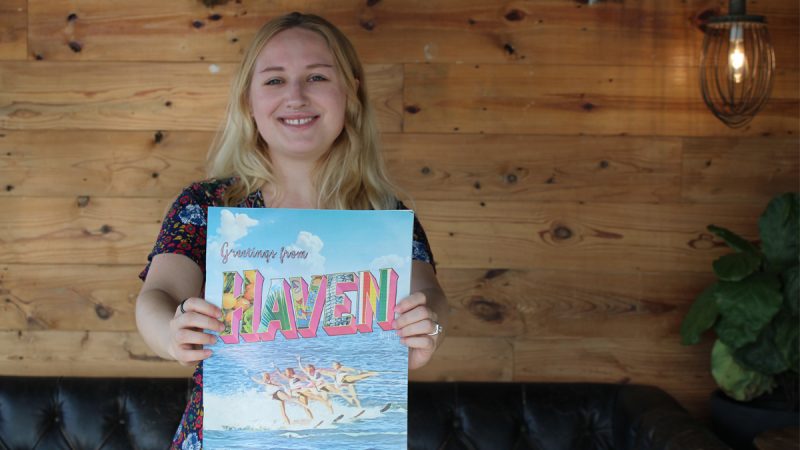 A typical day for Ella Sexson is, well, not so typical as a graphic designer for Destroyer Media & Marketing.

At the time of her interview with Polk State News, she was planning to spend her morning on an assignment that required Photoshopping a raccoon. Other days, she can be called to work on advertisements, assist with photoshoots, or take on the creative challenge of designing covers for HAVEN and LKLD magazines, which have become coveted works of art for locals who admire fresh perspectives on iconic Polk County themes.

No matter what the workweek may bring, Sexson credits Polk State College’s Digital Media Technology Program with preparing her for success in her art and career.

“Polk State has given me the foundation and tools to be confident as a graphic designer,” Sexson said. “The Digital Media Program has industry-standard equipment, knowledgeable professors who do not want to see you fail, and students and past students [as lab assistants] to help.”

When Sexson enrolled in the program in the summer of 2020, she “didn’t know anything – I didn’t even know how to save an InDesign or a Photoshop file.” But the program’s “no question is a dumb question” approach provides students with a strong foundation on which they can build their skills and creativity, Sexson said.

“Professor Joyce really taught me everything I know,” she said about recently retired Professor of Digital Media Richard Joyce. “I was so scared when I started the program, but I was able to learn very quickly because the professors and everyone involved in the program do such a great job at teaching and being accessible when students need help.”

“Polk State has given me the foundation and tools to be confident as a graphic designer. The Digital Media Program has industry-standard equipment, knowledgeable professors who do not want to see you fail, and students and past students to help.”

Sexson’s endorsement of Polk State’s Digital Media Technology Program is significant given her background, including the successful careers of her parents in the fields of media, marketing, and the arts. They moved from Michigan to Winter Haven in 2016 and founded Destroyer Media & Marketing. Chris Sexson serves as Publisher and Amy Sexson serves as Editor of the full-service digital agency, which operates HAVEN and LKLD magazines, Central Florida TIX, the Winter Haven Farmers Market, and more.

Polk State is a proud partner of Destroyer Media & Marketing, which was instrumental during the pandemic by creating special graduation sections in the magazines for graduates and their families to have as keepsakes during a time when in-person ceremonies could not be held.

HAVEN and LKLD magazines have quickly become staples across Polk County newsstands and households with a monthly circulation of approximately 30,000.

“As the company grew, my parents needed another designer, and I asked if it was something I could do,” said Ella Sexson, who has long possessed an artistic flare and started her career as an esthetician. “I always knew I would pursue art, and this was an opportunity right in front of me to explore a new field.”

While Sexson could have pursued her education and training elsewhere, she chose to enroll at Polk State because it is local, affordable, and highly recommended by others, including her fiancé Adam Doyle who is a student in Polk State’s Respiratory Care Program.

She has completed a handful of classes, including Intro to Digital Media, Image Editing with Photoshop, and Advanced Image Editing.

“One of my first projects ever was taking a picture of the Polk State Lakeland Campus and turning it from day to night,” Sexson said.

“I was able to learn so much so quickly that I was creating some of my covers while I was still in classes, including the ‘Creature from the Haven Lagoon’ design in collaboration with another graphic artist,” Sexson said of the October 2020 Halloween edition. “I was able to take what I was learning in class and put it into practice since day one.”

Sexson aspires to expand her scope of work to include freelance opportunities and honing in on her artistic style.

“I see myself doing a little bit of everything – web design, ads, covers. That’s the beauty of Polk State’s program; it made me a well-rounded graphic artist and now I feel prepared for anything.”

“I see myself doing a little bit of everything – web design, ads, covers,” she said. “That’s the beauty of Polk State’s program; it made me a well-rounded graphic artist and now I feel prepared for anything.”

She enjoys exercising her newest skillsets as part of her family’s growing business while also working part-time at downtown candy shop Confection.

In closing, Sexson offered some motivation for aspiring students and graphic designers alike.

“Don’t be scared or feel like it is ever too late to pursue something you are interested in,” she said. “Go in with the mentality to learn as much as you can, and it will be worth it.”