During its first semester of operation, the College served nearly 1,200 students —twice the number expected — and it has continued to grow ever since.

In 1966, ground was broken for Polk State’s first permanent campus, Polk State Winter Haven, located on the shores of Lake Elbert. Within a decade, the campus had expanded to include numerous buildings, accommodating a growing student body and increased program offerings.

By 1988, Polk State’s footprint in the county had grown to include a second campus, Polk State Lakeland, located on a former orange grove along U.S. 98 South between Lakeland and Bartow.

In the years that followed, Polk State expanded its Lakeland campus and added the Polk State Airside Center, located in South Lakeland.

Polk State continued to grow throughout the first decade of 2000, expanding access to higher education in the southeast Polk County with the addition of the Polk State JD Alexander Center in downtown Lake Wales and the Polk State Lake Wales Arts Center on State Road 60, in 2009 and 2011 respectively.

To reflect its new status as a baccalaureate institution, in 2009 the College changed its name to Polk State; previously it had been known as Polk Community College and, earlier in its history, Polk Junior College. Two years later, the College rebranded, adopting the Eagle as its mascot — chosen based on Polk County’s large eagle population — and a red, black and white color scheme. 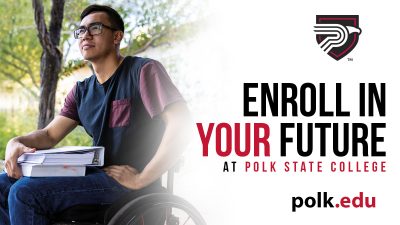 Polk State arts students get the skills to turn their passions into careers. Aaron Poidevin remembers the first time he thought he wanted to be a pilot. He was at MacDill’s Airfest. He…