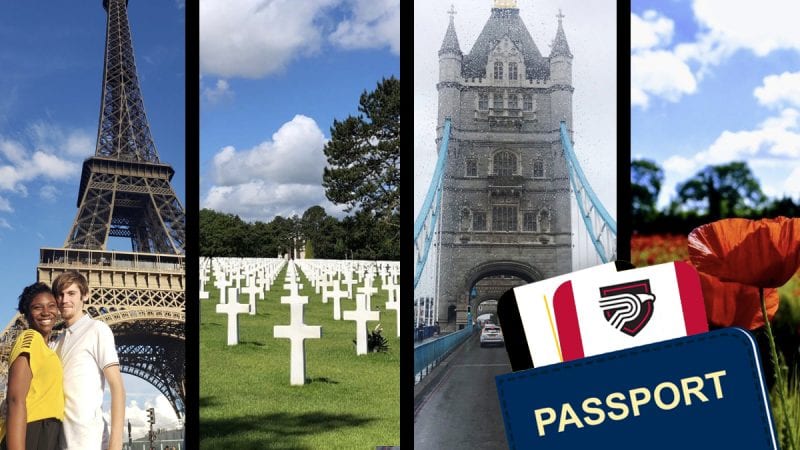 A Polk State College Study Abroad trip put 33 students in the middle of history this summer as they traveled to London, Paris, and Normandy following the 75th anniversary of D-Day.

Just days after the anniversary of the largest seaborne invasion, students embarked on their trip June 10 through June 17, participating in firsthand research and experiential learning opportunities that instilled in them the importance of history and culture.

“You read about it in the textbooks, but it is surreal to see where history actually took place,” said Erin Avery, who graduated from Polk State Lakeland Gateway to College Collegiate High School and is currently pursuing a bachelor’s degree in History at the University of North Florida. “Studying abroad opens your eyes to different cultures, allows you to experience history firsthand, and gives you a different perspective of what’s going on in the world – it gives you a global perspective.”

The trip, organized by Professor of History Dawn Dyer, was the first international study abroad opportunity held by one of Polk State’s collegiate high schools. With support from Polk State Lakeland Collegiate High School Principal Rick Jeffries, Dyer plans to host an international trip each summer, with a study abroad excursion to Greece and Italy scheduled for 2020. She plans to take students to London, Paris, the Alps, and Prague in 2021.

Travelers can earn three college credits through special topics courses that count toward the Global Studies designation on their diplomas.

Students who participated this summer are enrolled in the the 2020 trip, which is already at capacity with 40 travelers.

“This fact speaks highly about how positive and beneficial the Paris, Normandy, and London trip was,” Dyer said. “I am convinced that travel is one of the best teachers.”

Travelers landed in Paris, where they witnessed historic works of art at the Louvre Museum, took in breathtaking sights of the city by boat, and reveled at the Eiffel Tower lit up at night with twinkling lights. They also visited the Palace of Versailles, soaking in the architecture before traveling to Normandy.

The highlight of the trip for many was the visit to Normandy beaches, from Omaha to Utah where more than 160,000 American and allied soldiers battled Nazi Germany during World War II. Visits to the Normandy American Cemetery and Memorial and the World War II Museum allowed travelers to further reflect on the more than 9,000 soldiers who were killed or wounded – sacrifices that allowed more than 100,000 soldiers to begin their trek across Europe to defeat Nazi Germany.

“I am convinced that travel is one of the best teachers.”

“This day was very tragic and caused lots of sorrow… and being there – walking where men died – was the hardest part of the trip for a lot of people,” Tabitha Saldcedo wrote in a reflection essay. She graduated from Polk State Lakeland Collegiate in 2019 and is studying Anthropology at the University of South Florida. “But if it were not for those men who gave their lives to win over Normandy, we would not be the free country we are today.”

Dyer gave each traveler an American flag to place on the grave of a fallen soldier. She noted that many placed them on the graves of unknown soldiers.

Salcedo added that visiting the beaches where D-Day took place and seeing WWII artifacts at the museum gave her a true understanding of what it means to be free and to be an American.

“It has made a big impact on me that has wet my palate to explore and learn more,” she said.

Travelers did explore some more, with the last stop in England, where they toured Canterbury Cathedral, visited Buckingham Palace and Piccadilly Circus, and took another boat cruise for sightseeing.

Students agreed that their study abroad experience has given them a thirst for more travel.

“Curiosity. Every second in Europe was filled with exactly that,” Polk State Lakeland Collegiate student Abi Gann wrote in a reflection essay. “… There could be a book 10 miles wide and it still could not capture the essence of such a place.”

It is this spark of curiosity and learning beyond textbooks that motivate professors including Dyer to create study abroad opportunities for Polk State’s students.

“Curiosity. Every second in Europe was filled with exactly that… There could be a book 10 miles wide and it still could not capture the essence of such a place.”

Dyer sought an international trip for students after her own daughter’s positive experience studying abroad. Her two sons participated in the recent trip she hosted, and they brought back sand from Omaha Beach, which they donated to the Veterans Memorial Park in Tampa.

“It is important for people to see that history still exists today,” said student Alex Dyer, who is dual-enrolled at Polk State. “It inspired me, and I hope it inspires others.”

“I encourage students to participate in study abroad because it connects them to the world,” he added. “The experience goes beyond the everyday educational experience and it is unrivaled.”