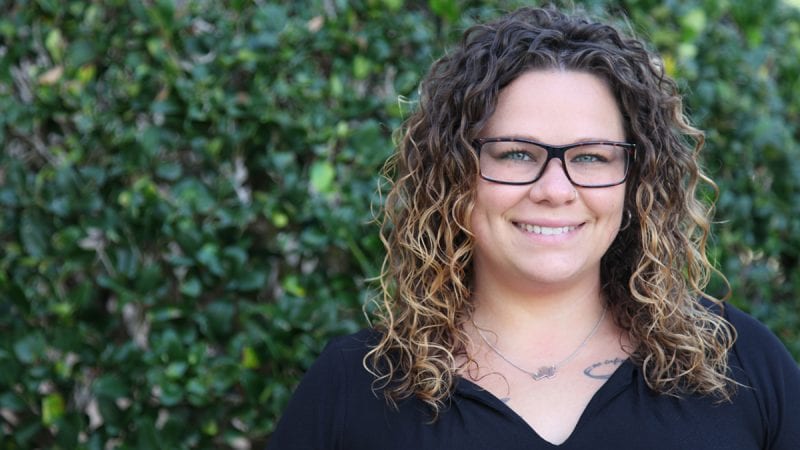 Growing up, Heather Monteleone didn’t have a strong female role model in her life, so she looked up to her teachers.

She recalls one buying her a jacket when it was cold outside, and another paying for her to go on a field trip when her family couldn’t afford to send her.

“I hope to be that teacher for kids like me,” said Monteleone, who will receive a Bachelor of Science in Early Childhood Education on May 2 during Polk State College’s 120th commencement ceremony.

She is one of six students who make up Polk State’s first Early Childhood Education baccalaureate class.

“My teachers helped me in ways that were so impactful,” she said. “Knowing that there are children out there who just need that one person to believe in them or to show them a little kindness has motivated me to get my degree.”

Monteleone was raised in Wahneta by her grandparents, who needed government assistance to keep food on the table and lights on in the house. Her parents had run-ins with the law and histories of substance abuse.

She was the first in her family to graduate high school and to achieve a college degree, but these were no easy feats for Monteleone, who gave birth to her first son at 17.

“Knowing that there are children out there who just need that one person to believe in them or to show them a little kindness has motivated me to get my degree.”

She had been living on her own for two years, moving from one friend’s couch to another’s while working at a restaurant to save up enough money to buy a car she could live out of.

Out of high school, she knew she wanted to go to college and learned about Polk State’s affordable, flexible degree options.

“I grew up thinking college was only for rich kids, but aspiring students should know that education is in reach with the people here at Polk State to help you,” said Monteleone, who recalled her nerves when she walked into the College holding her then-1-year-old. “I had no idea what I wanted to do or how I was going to do it, but I knew that getting my education would allow me to give my son opportunities I never had.”

She learned that Polk State was launching its bachelor’s degrees in Education, “but I thought I wasn’t smart enough,” she said.

Her father encouraged her to take the General Knowledge Test for Florida Teacher Certification Exam and she passed. She left her job at the nursing home in preparation for the Bachelor of Science in Early Childhood Education.

But a sudden tragedy put school on the backburner.

“It was my last final exam and I saw my dad calling. I called him back when I was finished and his friend answered. He had taken his own life,” she said. “My dad was the one who pushed me. I wasn’t going to go back to school after this.”

She worked as a server in a restaurant until her son started asking when she was going back to school and Patricia Linder, Director of the Education baccalaureate programs, reached out to encourage Monteleone to pursue her bachelor’s degree.

“My son became my motivator and my husband supported me in quitting my job to focus on going back to school,” she said.

The last two years have been filled with homework at the park with her kids, late nights studying, and early mornings getting to class and her field experience at Lena Vista Elementary, where she interned in a kindergarten classroom.

Polk State launched its Bachelor of Science in Early Childhood Education and Bachelor of Science in Elementary Education programs in August 2016 with built-in measurements for state-mandated standards developed in collaboration with Polk County Public Schools – Polk County’s largest employer – to create graduates who are ready to immediately and successfully lead local classrooms.

Additionally, the Early Childhood Education program integrates Reading K-12 Endorsement and English for Speakers of Other Languages (ESOL) competencies into course curricula, providing graduates with a competitive edge in employment.

“It’s a huge bonus to be graduating with these endorsements,” Monteleone said. “It’s awesome that Polk State students are able to get this type of quality education that would be too expensive elsewhere.”

“It’s a huge bonus to be graduating with these endorsements. It’s awesome that Polk State students are able to get this type of quality education that would be too expensive elsewhere.”

Monteleone’s proudest moment will be looking over at her sons and husband in the audience during Polk State’s pinning ceremony for the first Bachelor of Science in Early Childhood Education class.

“I got my high school diploma in spite of everyone who told me I couldn’t because of my situation, but my college degree is for my sons, my family, and me,” Monteleone said. “And if I can be that teacher who changes just one student’s life, then this was all worth it. I’m going to be there for my students.”

Through the BayCare Student Assistance Program, students can call 1.800.878.5470 to receive immediate assistance with issues relating to the loss of a loved one, coping with college, and more from a licensed counselor.  Students can also meet with counselors on the Lakeland Campus on Tuesdays from 9 a.m. to 1 p.m. in LTB 1274 and on the Winter Haven Campus on Wednesdays from 1 p.m. to 5 p.m. in WLR 237A. Appointments can be made by calling 863.669.2309. Walk-ins are also welcome.  All services are free and confidential.