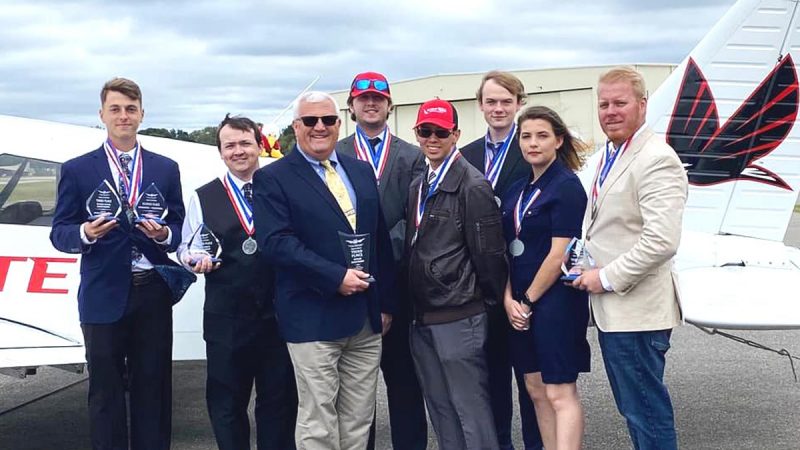 For the first time in Polk State College history, the Polk State Flight Team has earned a spot in the National Intercollegiate Flying Association (NIFA) nationals to be hosted at Ohio State University in May 2022. The Eagles finished third overall and second in flying events during NIFA Region IX Safety and Flight Evaluation Conference (SAFECON) competition Nov. 1-6 at Lakeland Linder International Airport (KLAL), home of the Polk State Aerospace Program. The Aerospace Center for Excellence and SUN ’n FUN Aerospace Expo served as the official hosts of the event.

“I’m so proud of our team’s effort which is allowing us to compete in NIFA nationals for the first time in the history of our college,” said Carl Valeri, coach of the flight team. “It is truly humbling to have this opportunity and all the credit goes to our team members who prepared diligently and performed at a high level to make this lofty goal a reality.”

“Our team works hard, and they have proven themselves on a national scale as a real contender against much larger programs,” said Eric Crump, Polk State Aerospace Program Director. “These students bring respect to our College and our program. I am very proud of and for them.”

Polk State finished second in the flight events championship behind Embry-Riddle Aeronautical University and ahead of Auburn University, Jacksonville University, and Florida Institute of Technology. The team placed third in the ground events and third overall to secure the trip to nationals. Embry-Riddle and Auburn claimed the top two overall spots and will also represent Region IX in the national competition.

Last season, the team finished in the top 20 in NIFA’s national competition that included only ground events. This season’s achievement marks the first time the program has ever advanced to nationals in flying events. NIFA exists to serve as a forum, competitive and non-competitive, for collegiate aviators and promotes safety through education and excellence through competition.