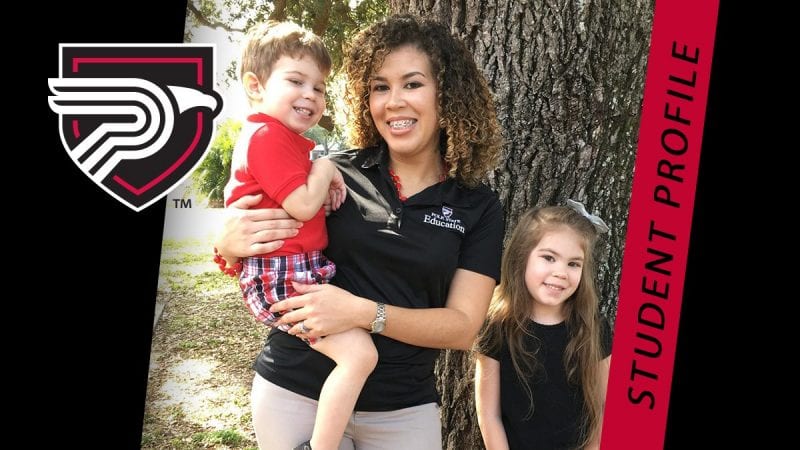 Brittiny Pearn always knew she wanted to be a teacher, and she is well on her way to being the next leader of a Polk County classroom.

Pearn, a U.S. Army veteran and mother of two young children, does all of this while juggling everyday responsibilities, like many Polk State College students.

“I hope I can inspire people, whether it’s the fact that I’m a mom at 27 years old, that I had a rough family life, or that I’m a girl who likes math,” she said. “Your path may not happen the way you want or plan, but you can accomplish your goals no matter what detours you need to take along the way.”

Pearn grew up a military brat and wasn’t ready to leave the military-town lifestyle when she graduated high school. She stayed home to help take care of her nephew and went into customer service, but quickly realized that wasn’t a career she wanted to pursue.

“Your path may not happen the way you want or plan, but you can accomplish your goals no matter what detours you need to take along the way.”

She decided to join the Army.

“In high school I was in JROTC (Junior Reserve Officers’ Training Corps) and I always wanted to go to school and travel. The Army would allow me to do both,” she said.

In November 2009, she left for basic combat training at Fort Sill, Oklahoma. She moved to advanced individual training at Fort Sam in Houston, Texas, where she met her husband. They were both medics in the Army.

She was deployed to Afghanistan, but soon learned she was pregnant and returned home after one month in the country. She was stationed at Fort Carson, Colorado, before being discharged and moving to Fort Hood in Killeen, Texas, where her husband was stationed. She gave birth to their daughter and they lived at Fort Hood until her husband completed his service in 2014. Then, they returned to his hometown in Polk County.

“Because my dad was in the military and we moved around from base to base my whole life, I didn’t really have a hometown,” Pearn said. “Moving here to Polk allowed us to be close to my husband’s family and to give our kids a hometown of their own.”

Pearn decided it was time to pursue her higher education, but she wanted to wait a year to gain Florida residency, which would make her eligible for in-state tuition.

“When I came to the campus, the staff was so welcoming and encouraging; I decided to jump right in,” she said.

“The cost is one of the best things about Polk State’s programs compared to programs at other schools,” she said. “I am getting my four-year degree for less than $10,000, but I am receiving the same quality – if not better quality – education than students at universities.”

“The cost is one of the best things about Polk State’s programs compared to programs at other schools. I am getting my four-year degree for less than $10,000, but I am receiving the same quality – if not better quality – education than students at universities.”

She received her Associate in Arts degree in 2015, in time to enroll in one of Polk State’s Education baccalaureate programs, which started the following year.

Polk State is the only public post-secondary institution in Polk County offering state-approved teacher education preparation programs. Polk State’s Bachelor of Science in Early Childhood Education and Bachelor of Science in Elementary Education degree programs are approved by the Southern Association of Colleges and Schools Commission on Colleges (SACSCOC), Florida Department of Education (FLDOE), and State Board of Education.

In Fall 2016, Pearn enrolled in the Bachelor of Science in Elementary Education Program. She aspires to teach third, fourth, or fifth grade, and she particularly enjoys math, but Polk State’s program has “eased me into feeling confident about teaching everything,” she said.

“Polk State’s program has prepared us to be successful in the classroom,” she said. “I feel well versed in every content area and our courses teach us to integrate things such as art and STEM into those content areas, allowing us to experiment with how we lesson plan and deliver the standards.”

Polk State has built-in measurements for state-mandated standards that were developed in collaboration with Polk County Public Schools – Polk County’s largest employer – to create graduates who are ready to immediately and successfully lead classrooms.

Both the Bachelor of Science in Elementary Education and Bachelor of Science in Early Childhood Education integrate English for Speakers of Other Languages (ESOL); Science, Technology, Engineering, and Math (STEM); Exceptional Student Education (ESE); and Reading K-12 Endorsement competencies into the course curricula. This customized, standards-based approach is designed to provide graduates with a competitive edge in employment.

As the student representative on the Polk State Bachelor of Science in Education Advisory Board, Pearn has experienced firsthand the development of the College’s Education baccalaureate programs and the partnership between Polk State and Polk County Public Schools. The Board is made up of principals from Polk County schools, Polk State’s program directors, professors, as well as Pearn.

“It’s exciting to see how eager the principals are for us to graduate so that we can get into their classrooms,” she said. “They give us great feedback, and it’s amazing to see our professors and directors continuously improving the program. They are invested in us, the students, and that has been the most encouraging part throughout the entire journey.”

“It’s amazing to see our professors and directors continuously improving the program. They are invested in us, the students, and that has been the most encouraging part throughout the entire journey.”

Pearn is also encouraged by the real-world experience she has already received in the classroom. She has had the opportunity to observe and work with teachers in a handful of Polk County classrooms, and when she completes her courses this semester, she will begin an internship in August.

“I’m able to learn about classroom management and get ideas from teachers of what I like and what I would do differently,” she said. “Paired with the courses and the help of our professors and directors, I feel that I am very prepared to go into the classroom.”

She plans to receive her degree in December with the first two cohorts of Elementary Education and Early Childhood Education baccalaureate students. She hopes to be employed in a classroom by Fall 2019.

“Right now I am focusing on my classes – I take them at night and on Saturday mornings, and do my homework during the days,” said Pearn. “At first I was thinking there was no way I could complete this, and at that time I only had my daughter – and she’s the calm one.”

Pearn described her gratitude for the flexibility, affordability, and quality of Polk State’s program.

“The staff and professors have not only given me all the tools I need for my future career, they have also given me a positive growth mind set,” she said. “I’m not a pessimist, but I’m a realist and a worry wart who needs to find more positive in situations. This program has allowed me to do just that.”