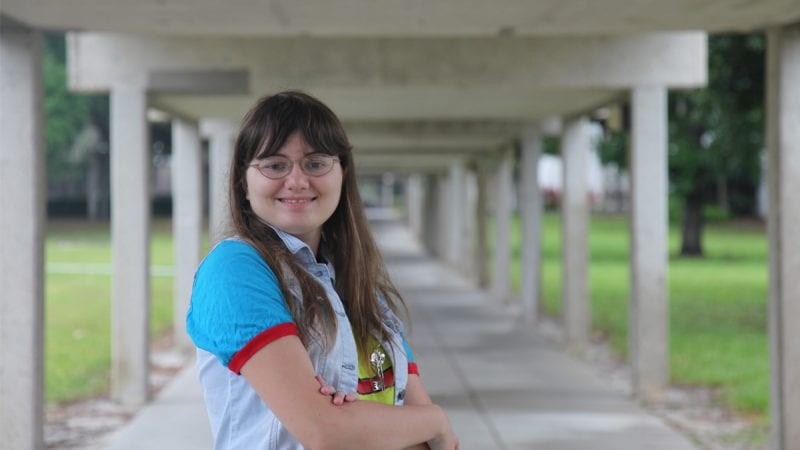 Like most high school students, graduating felt bittersweet for Hope LaMond, who was nervous about college but eager to gain some freedom.

She was no stranger to Polk State College, where at six years old she started attending Kids at College, ultimately serving as a teen volunteer.

“Still, my first day of class as a college student came like a hurricane – it was like culture shock for me,” she said. “I heard horror stories of people like me quitting college halfway through.”

But LaMond didn’t quit. She received her Associate in Arts degree May 2 with Polk State’s 120th graduating class.

“Polk State is a godsend for students like me,” said LaMond, who has autism. “Polk State doesn’t dumb college down; it makes accommodations for students with disabilities so that we have the opportunity to accomplish what every other student can achieve.”

Staff and faculty “treat you like royalty here,” she added. “Students like me are treated like we belong and we are shown that it is OK to have a disability.”

LaMond, who works part-time as an associate producer for a children’s story time show and served as an active member of Polk State’s International Circle organization, is a shining example of that.

Through Polk State’s Kids at College, LaMond discovered her talent for video production, which led her to enroll in Lake Region High School’s iMAG Academy focused on technology, marketing, and graphic design.

She enrolled at Polk State in 2016, and when she began to struggle in math, the College’s Office of Disability Services was there to ensure LaMond stayed on her path to a degree.

“I would fail my tests miserably and come home crying,” she said, “but I was given great accommodations, including the ability to take computer courses in lieu of math classes.”

“They were just as challenging, but I was able to work through them,” LaMond added. “It showed me that students like me don’t have to be stuck in a special education class where we just learn some simple life skills and how to bag groceries – we can survive in the classroom and in the real world.”

LaMond has also learned how to “survive in the real world” thanks to Polk State’s partnership with Citrus Connection that allows students to right at no cost with their Polk State IDs.

“This is a great perk for Polk State students,” she said. “I have never felt so free.”

With the knowledge, skills, and confidence she has developed during her time at Polk State, LaMond wants to pursue a bachelor’s degree in communications or history. She is considering an online program through the University of Central Florida.

In the meantime, she plans to take a semester off and aspires to travel to Germany.

“Polk State has shown me that I can do anything,” LaMond said. “I’m excited for what’s ahead and hope I can be an example for people in our community, especially those with disabilities, that they too can achieve their degrees.”