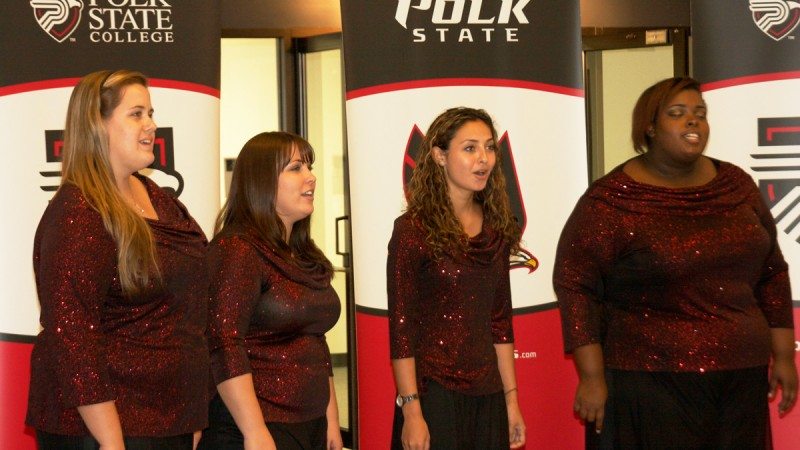 Beautiful music is made every day within the classrooms of Polk State Music — just stroll down the hall of the Winter Haven Fine Arts building some time, and you’ll hear it for yourself.

But every once in a while, something extra special happens here. Maybe it’s chemistry. Maybe it’s magic. Whatever it is, every now and then, a small group of students is drawn to one another, and they create — completely of their own volition — a whole new performance ensemble.

The most recent example of this is The Fource of Attraction, a female quartet that formed about a year ago and has since performed for a wide variety of audiences, serving as the Music department’s go-to community ambassadors.

“It’s completely student-driven. It wouldn’t be as good if the department forced it. These are students who are really self-motivated and share a common passion.”

They wanted to sing. All the time.

“We knew we would take it seriously and that we all cared about music,” said Lopez, 20, a Lakeland resident who will graduate with her Associate in Arts in May and plans on continuing her education to study music composition.

“We also knew that by performing together as a small group, we would learn music faster and get to do different kinds of music.”

So far, Lopez has been spot-on in her expectations.

The Fource spends hours together practicing outside of class, constantly expanding their repertoire. They sing everything from 60’s doo-wop favorites to current hits by chart-toppers Katy Perry and Sara Bareilles.

In the past year, the quartet has followed a busy performance schedule — Manzi jokingly refers to herself as its “bookie” — that has included engagements for the United Way, Women’s Resource Center, the Polk State College Foundation, political groups and churches, just to name a few.

The quartet takes on each performance engagement for no money in return, and many times at their own personal sacrifice, Manzi said — be it hours they could be working or with their families and friends.

But in exchange for the time they give to represent Polk State and its Music Department, they receive invaluable performance experience, opportunities they wouldn’t necessarily get if they were starting their music careers at a bigger institution.

“Everything comes out of their own intrinsic desire to hone their craft and create opportunities for themselves,” Manzi said. “They’re getting real-life experiences. Every time they perform, they become a little more professional.”

Helm said there’s nothing like being part of an ensemble to stretch yourself as an individual.

“There’s a bit of friendly competition,” said Helm, 22, who graduated from Polk with her Associate in Arts degree earlier this year and plans on earning a bachelor’s degree from the College’s still-in-development Elementary Education program.

“You want to be better as a whole unit, so you practice more on your own. You get better as an individual and then you advance the whole group.”

Polk State Music Professor John Anderson has seen multiple groups like The Fource emerge during his eight years with the College. There truly is something a little magical about students finding each other and dedicating themselves to an ensemble — when they certainly don’t have to.

“It’s inspiring, as an educator, to see that spark happen. It’s the love of music in its purest form,” he said. “These are students who simply love to sing, or love to play. They collaborate, they jam, they grow and they represent our program proudly in the community. We can’t predict which students are going to mesh or what ensembles we may have a month, a year, down the road. But when it happens, it’s serendipitous, beautiful — and fun.”

The Fource of Attraction hopes to eventually embark on a statewide tour. Currently, they are practicing for an upcoming performance at the College’s annual FallFest on Oct. 19 at Polk State Winter Haven, 999 Ave. H N.E. FallFest is free and open to the public and will take place from 9 a.m. to 3 p.m., with The Fource of Attraction slated for 10:30 a.m.