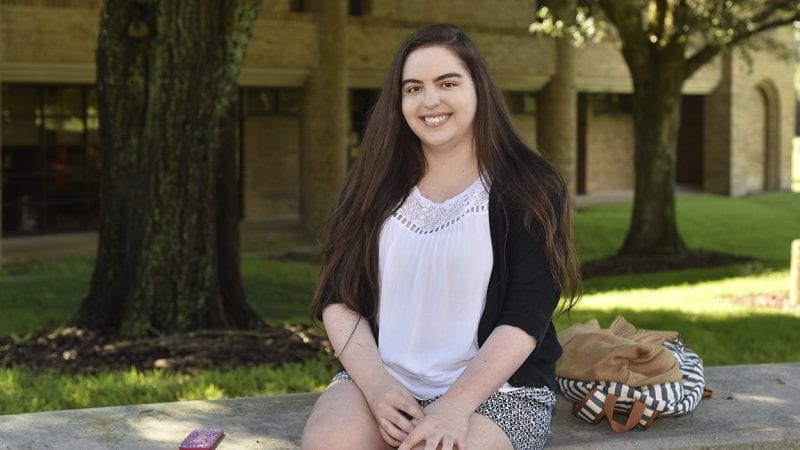 She hasn’t been on a plane since she was in second grade.

She’s never been outside the United States.

But in just about a week, Polk State student Claudia Oppelt will travel to England as a participant in the first Polk State study-abroad trip of the 2016-17 academic year.

“This is a really special opportunity,” Oppelt said. “I’m doing something on my own. I’m going to a place I’ve always wanted to see. I’m so excited.”

During her 10-day stay in England, Oppelt will visit London but will spend the majority of her time in Amesbury, where she will participate in the ongoing archaeological dig at Blick Mead near Stonehenge. Former Polk State Fulbright Professor David Jacques, who is now a senior research fellow at the University of Buckingham, is leading the dig. Polk State is the only American educational institution Jacques has invited to take part in the dig.

Oppelt, the 2016 Polk State Lakeland Gateway to College Collegiate High School salutatorian, will be sending dispatches from England, allowing News@Polk readers to follow her adventures across the pond.

A few days before her Oct. 13 departure date, News@Polk caught up with her to talk about her international aspirations and how she’s preparing for her first overseas experience.

What made you want to participate in this trip?

I’m halfway through my Associate in Arts degree at Polk State. I’m planning to continue on to earn a bachelor’s degree with a double major in Renaissance and Medieval Studies and Middle Eastern Studies. One day, I want to work in the Foreign Service, maybe as a diplomat with the State Department. I really love studying the past, and have been obsessed with England since I was a kid. For me, this is my shot to actually go there. What made it possible was that it was reasonably priced. (The cost of the trip was $2,800, including airfare, accommodations and ground transportation. Polk State’s study-abroad trips are generally less than $3,000.)

What are you most looking forward to?

Seeing the Magna Carta and hearing a boys’ choir perform. We’re going to be doing both in Salisbury. I’m taking World Mythology, the course that accompanies this trip. I’m really looking forward to seeing some of the places and things that I’ve been reading about in real life.

How are you preparing for your trip?

I had to buy a new suitcase. I’ve also been watching YouTube videos about how not to look like an American in London. Londoners don’t like a lot of bright colors. I also bought a trench coat and I have to buy some rain boots. I also had to buy a converter for my cell phone charger, iPad and hair straightener.

It’s your first trip out of the country. What does that feel like?

I’m a little nervous to fly over the ocean, but mostly I’m excited. I’m doing something on my own for the first time.