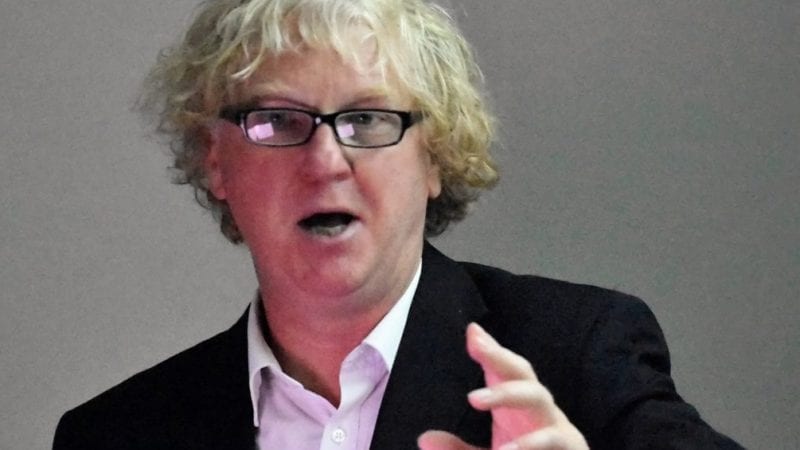 Jacques, a former Fulbright professor at Polk State, is now a professor and senior research fellow in archaeology at the University of Buckingham, and project director of an internationally significant dig site just a mile from Stonehenge in the town of Amesbury, England.

During his lecture, Jacques updated attendees on the discoveries being made at the dig site — and Polk State’s role in making those discoveries possible.

“This wouldn’t have happened without my time here,” said Jacques. “The time I had at Polk State gave me the opportunity to really think outside the box.”

Polk State is the only American educational institution permitted at Jacques’ site, and several groups of students have traveled to England in recent years to assist him and his team in their research.

Jacques highlighted the positive outcomes of Polk State’s partnership during his lecture. Among them: In 2014, with the assistance of Polk State students, Jacques and his team uncovered approximately 50 items at the dig site, including 40 arrowheads. Jacques and his fellow researchers have also uncovered large amounts of animal bones, many of which are thought to be from aurochs, an extinct type of cattle that was typically twice as large as an average bull, and remains of a dog’s tooth, later determined to be a dingo.

Many of the items date back to 8000-4000 B.C., and shed new light on the lives of people living in the area during that time, particularly how they hunted for food.

However, the most significant outcome of Polk State’s partnership with Jacques involved a piece of wood. Polk State sponsored carbon dating of wood found at the dig site that confirmed it is the oldest site in Britain. Based on the results of the carbon dating, the wood dates back to 2405-2155 B.C.

“The pine itself may have been a sacred wood, which makes it special,” said Jacques.

Humanities Professor Lance Russum, who has participated in the College’s study-abroad trips to Jacques’ dig site, and who introduced Jacques at Tuesday’s event, expounded on the significance of the carbon dating results and Polk State’s involvement in the testing.

“The carbon dating Polk State facilitated is huge in terms of academic international standing,” Russum said, “and that our students have access to this site and this information is monumental for our students and their academic pursuits.”

Jacques put into perspective for his audience the significance of the dig site, called Blick Mead. Evidence shows that two time periods, the Mesolithic and Neolithic eras — the middle and late Stone Age respectively — converged at the site. Discoveries made at the site are helping today’s researchers understand the way of life in those two time periods.

“This place becomes more and more special as time goes on,” said Jacques. “(Blick Mead) makes Stonehenge even more special than before.”

After the lecture, Russum reiterated the unique opportunities Polk State students enjoy because of the College’s connections with Jacques.

“This is a great experience for our students because they will soon be the ones moving into research colleges and universities,” he said.