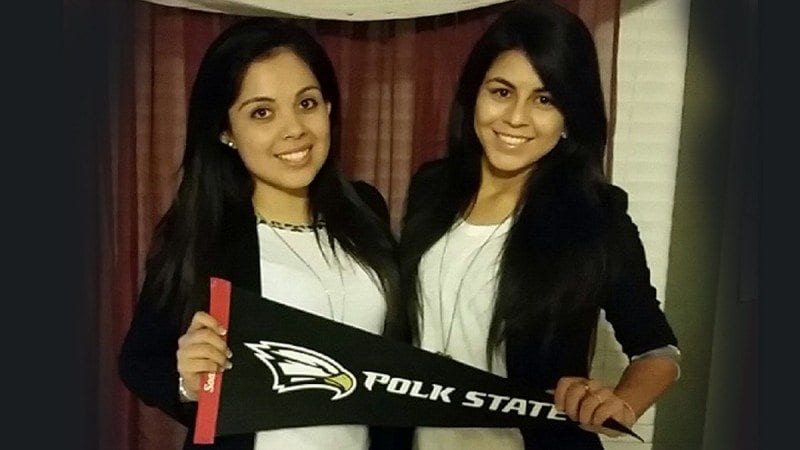 Vanessa Revelo (L) and Berenis Revelo are cousins who will both become the first in their families to graduate from college. They will receive their degrees during Polk State's Dec. 11 commencement ceremony.

Polk State College will celebrate its 111th commencement ceremony Dec. 11 at 6:30 p.m. at The Lakeland Center. As graduation nears, News@Polk will profile graduates to learn more about the paths they took to the commencement stage, their dreams for the future, and how Polk State has changed them and their lives. To suggest graduates who should be included in these ongoing profiles, please email news@polk.edu.

Vanessa Revelo: “I’ve been working hard, and here I am, a college graduate.”

Vanessa Revelo, 23, will receive her Bachelor of Applied Science in Supervision and Management degree, becoming the first in her family to graduate from college.

“I’m so excited. My whole family is going to be there. I just want them to know that I’ve been working hard, and here I am, a college graduate.”

Her father lives in Mexico and her mother supported three children as a housekeeper. Even though it was going to be hard, Revelo was determined to get an education while also navigating the first years of parenthood.

She earned her Associate in Arts from Polk in 2012, and immediately set her sights on a bachelor’s.

“I didn’t even walk after my AA degree in 2012 because I knew I was going to continue my education at Polk State,” Revelo said.

Revelo worked two part-time jobs throughout her college years, but recently landed a full-time position as a branch assistant for a staffing agency. Her full-time salary, plus the fact that she is graduating free of student-loan debt, makes her excited about what lies ahead.

“I’m doing this for my son, Oscar,” Revelo said. “I want him to know that school is important, that anything is possible. He’s not going to understand on graduation night, but I’m going to tell him that I’m doing this for him. I want to better his future. I want to make more money and save so we can buy a house and he can get an education.”

Also graduating this term is Revelo’s cousin, Berenis, who will receive her Associate in Arts degree. Berenis is also the first in her family to graduate from college.

“Coming from a family with no educational background, we wanted to change our family’s way of thinking,” Revelo said. “Now, together, we are here to show everyone, and most importantly our family, that it is possible and important to achieve what one desires.”

Revelo plans to work for several years. While she’s saving to provide for Oscar, she’ll also be putting away money so that she, too, can return to the classroom one day.

“I want to get my master’s, and ultimately, my doctorate,” she said. “When I go for something, I go for it.”

Berenis Revelo: “I came to Polk to see if college was right for me. It was.”

Berenis Revelo will receive her Associate in Arts degree, a credential that will carry her on to further studies at the University of Central Florida.

“My parents are so proud,” Revelo said. “When they found out I was going to graduate, they said to keep on doing what I want to do, to keep going.”

Revelo, 21, graduated from Lake Wales High School. She became inspired to further her education while watching her older brother earn his GED, but then return to school to become a firefighter.

“My older brother made me realize how important school is,” Revelo said. “School will get me somewhere. After you graduate, you get to make your own life.”

When she initially enrolled at Polk State, Revelo mostly wanted to just give college a try. Soon, though, she was envisioning graduation day.

“I came to Polk to see if college was right for me. It was. I realized that this was the right choice for me,” Revelo said.

At UCF, Revelo will study finance. Her long-term dream is to own a business, but for now, she’s savoring the satisfaction of reaching her short-term goal — earning an AA from Polk.

“I matured at Polk State,” she said, “and I realized that everything I was doing here was about taking one more step to the life I want.”

Maritsa Saucedo: “No matter what you want to do, you can start at Polk State.”

This commencement will bring to a bittersweet end Maritsa Saucedo’s six years at Polk State College. 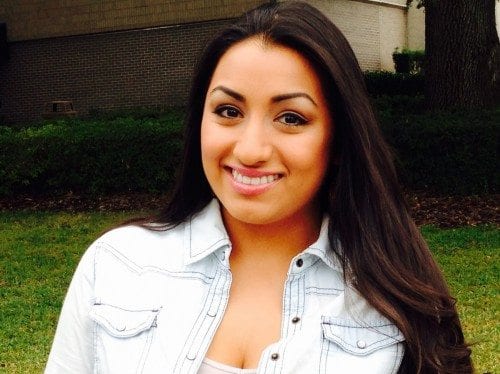 Saucedo, 23, began her studies at Polk as a dual-enrollment student during her sophomore year at Lake Region High School. Advisors from the College had come to hand out brochures, and as soon as she saw the one on the nursing program, she started planning for her future.

“When I was a kid, I thought being a doctor was the best thing,” Saucedo said, explaining her plan was to first become a Registered Nurse and then attend medical school.

Through dual enrollment, Saucedo was able to complete many of the prerequisites for the Associate in Science degree in nursing. She graduated with that degree in 2012, and went straight to work at Winter Haven Hospital.

“I really fell in love with nursing,” she said. “I love the interaction with the patients. I love being there with them every day and helping them.”

Saucedo revisited her plans to attend medical school, deciding instead to become a nurse practitioner. To get there, however, she’d need more degrees. Lucky for her, in 2011, Polk State launched its Bachelor of Science in Nursing degree. Saucedo transitioned right into that program, and will graduate with her BSN this month.

“I didn’t even apply to other schools,” she said. “Polk State is convenient, local, and affordable. No matter what you want to do, you can start at Polk State.”

Saucedo’s parents came to America from Mexico. They worked in the citrus groves for several years before opening their own business, a fruit stand in Wahneta. They have since seen both their children graduate with college degrees; Saucedo’s brother, Gerardo, also graduated from Polk State’s BSN program.

“They’re really proud of us. They always motivated us and told us that getting an education was our job,” Saucedo said.

Saucedo plans to pursue her master’s degree at the University of South Florida.

“I feel proud of myself, too, that I reached one of my goals, but I still have a way to go,” she said.