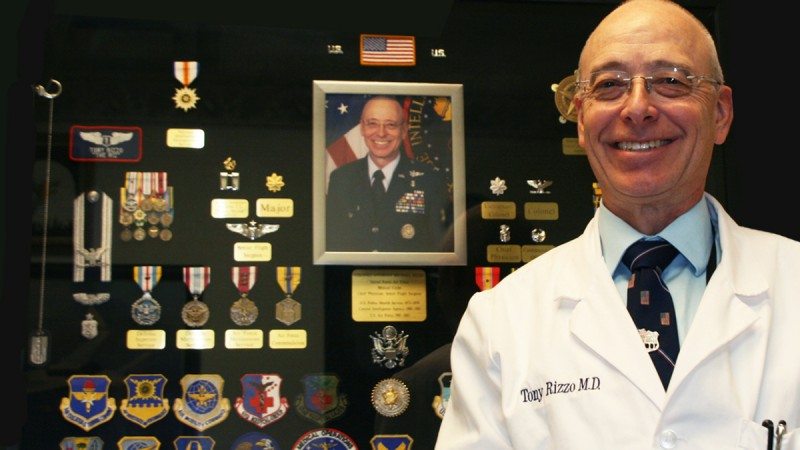 Dr. Anthony Rizzo is a retired Air Force colonel who received numerous honors for his contributions to medical intelligence. A shadow box containing many of his awards is on display in his office at Polk State Winter Haven.

It’s a Wednesday afternoon at Polk State Winter Haven, and a new biology professor is teaching aspiring nurses about the circulatory system. He’s an affable man, likeable even when correcting his students, tough but willing to engage in moments of classroom banter.

Sitting in the back row, a visitor takes it all in, and keeps going back to the same thought: Just months ago, this man advised the president of the United States.

Dr. Anthony Rizzo — Tony as he prefers to be called — joined the College’s faculty in August. The phrase “starting a new life” is used to describe all sorts of less dramatic transitions, but in Rizzo’s move to Polk, it certainly applies.

Even three months in, he’s still adjusting, a little more each day.

“It is difficult,” he said. “But maturity requires a person to know the difference between who they are and what they do. I am still who I am. It has been a lifetime goal of mine to be a teacher, and that’s what I’m doing now.”

The Intelligence Star, he relates for the layman, is the same award given to one of the lead characters in the 2012 Ben Affleck movie, Argo, about the rescue of six Americans from Iran in 1980.

“I can’t tell you why I received mine,” he said.

And by that, he means he really can’t. It’s classified.

The box also contains his two Defense Superior Service Medals, one of the highest awards given by the military, and more than a dozen patches, each representing different units of the U.S. Air Force he either led or served.

The honors on display in his office punctuate an illustrious, four-decade career that combined his love of medicine, intelligence, and country. He studied at the University of Cincinnati College of Medicine. He was an undercover CIA officer. He reached the rank of colonel in the Air Force.

Again, for the layman, it was his job to inform the nation’s top leaders about health-related threats to the American people. Examples: emerging diseases, diseases that could potentially be used as weapons against the U.S., countries experimenting with harmful biological or chemical agents.

“Our job was to predict what would be a threat to the United States,” Rizzo said. “What I’m most proud of is having been part of protecting this country from threats that people will never even know we faced.”

His career in the military came to an end in July. Retirement is mandatory at 62, but Rizzo left a few months early to take the job at Polk. He and his wife had purchased a home near the Winter Haven Municipal Airport years ago, so it all worked out perfectly.

In his retirement ceremony at Fort Detrick in Maryland, representatives from the Air Force and the Centers for Disease Control and Prevention spoke, lauding Rizzo for his integrity and accomplishments, his leadership, and his contributions to national security.

The ceremony was recorded, and near the end, Rizzo takes the microphone, calling his wife and three children his heroes and quoting from the Bible, the book of Timothy:

“I have fought a good fight, I have finished my course, I have kept the faith. For I am now ready to be offered, and the time of my departure is at hand,” he read to the crowd, with a shaky voice.

It’s been three months now, and it’s still hard sometimes to not think about his former line of work, about the threats he knows are out there and the course of action he thinks the country should take.

But each day he puts that part of him in a mental box, he said. He puts on his white lab coat, teaches his students, and every chance he gets, heads over to the Airport and takes off in his airplane. As he said during a recent, spur-of-the-moment flight to Zephyrhills:

“Nothing bothers you up here.”

More than three-dozen military veterans work at Polk State College. The College currently serves more than 400 student-veterans, and that number is growing at a rapid rate.