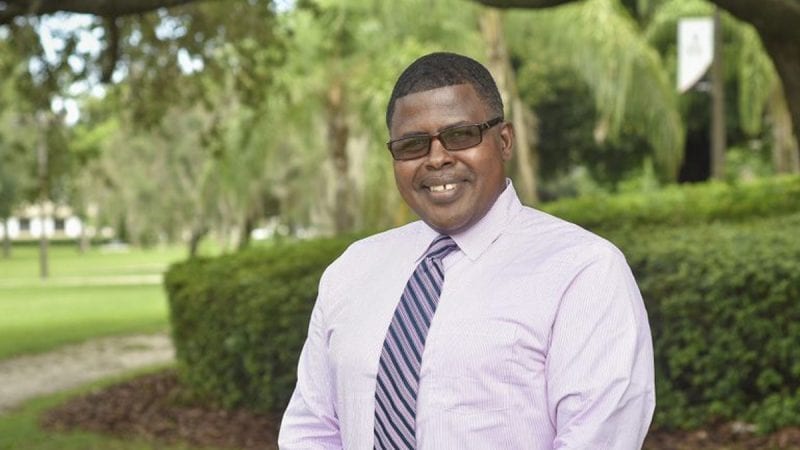 Fetter, the founding principal of Polk State Chain of Lakes Collegiate High School, retired in February, and Bonney has been called in to play.

And as a former football player and self-proclaimed “coach at heart,” Bonney does all of this with perfectly crafted sports analogies to explain his commitment to student success and Polk State Chain of Lakes Collegiate High School.

“I’m a Boston Celtics fan, and in 1983, Coach KC Jones was asked how he leads such a great team. He said he gets the team’s input, then moves out of the way,” Bonney explained. “We have a very competent, hardworking staff, and I will make sure they have the support they need, from the latest technology to professional development opportunities.”

He is also confident in the students.

“We have great kids,” he said. “They really have a passion for school, and it’s amazing when those who were just planning to graduate also achieve their Associate in Arts degrees.”

Both schools are also designated Schools of Excellence, which grants certain administrative flexibility, including greater autonomy for principals in daily operations, exemption from mandated daily minimum reading instruction, exemption from established start and end times for the school days, and the calculation of class size based on school average.

Of the 160 graduates of Polk State Chain of Lakes Collegiate High Schools 2018 class, 108 received their Polk State Associate in Arts degrees in addition to their high school diplomas. The average number of college credits earned was 56. And with the ability for students to jumpstart their higher education at no cost to them, Polk State’s collegiate high schools continue to grow.

Bonney plans to tackle this opportunity with a strategic approach like an athlete would on the field.

“We will stay on the cutting edge of training, professional development, and technology to ensure a learning environment that fosters success for our students,” he said.

He also plans to spearhead closer partnership with Polk State Lakeland Collegiate High School and Polk State Lakeland Gateway to College Collegiate High School. Bonney, Principal Rick Jeffries, and Principal Corey Barnes are discussing the possibility of a unified graduation ceremony as well as an awards banquet that would serve as a fundraiser while recognizing the top performing student among Polk State’s three collegiate high schools with an award in Fetter’s name.

“Ms. Fetter established the standards of academic rigor and commitment to servitude that our collegiate high schools are dedicated to today,” Bonney said. “It’s important that we honor that as well as the accomplishments of our students.”

With the competitive nature of an athlete, Bonney adds that he hopes the first awardee is from Polk State Chain of Lakes Collegiate High School.

“But the goal is to bring our collegiate high schools together because we’re stronger that way,” he said.

Bonney, a 1979 graduate of Bartow High School, admits that a career in higher education was plan B for him. He played football in middle school, high school, and college, where he achieved a bachelor’s degree in Health and Physical Education and a master’s degree in Sports Administration from Indiana State University. More recently, he earned a doctorate degree in Higher Education with a minor in Organizational Leadership and College Curriculum from Nova Southeastern University.

“I always wanted to play sports, but my mom taught me that you always need a backup plan, and a college degree is a pathway to a better life,” Bonney said. “I always liked school and enjoyed working with kids over the summers at the Carver Recreation Center in Bartow.”

When he was serving as P.E. coach at Jewett Academy, then-principal Linda Ray told Bonney he would be a principal one day.

“She planted that seed, and I went on to serve as Title I facilitator, dean of students, and assistant principal,” he said. “It is an honor to be here now.”

Bonney continues to use his story to inspire Polk State students.

“I tell them you can be anything you want to be, but you need to have a plan B,” Bonney said in 2016. This sentiment still holds true today. “Many times, the ‘B’ stands for brilliant. With education, you can blossom in lots of fields, but the most important thing is to get your education.”