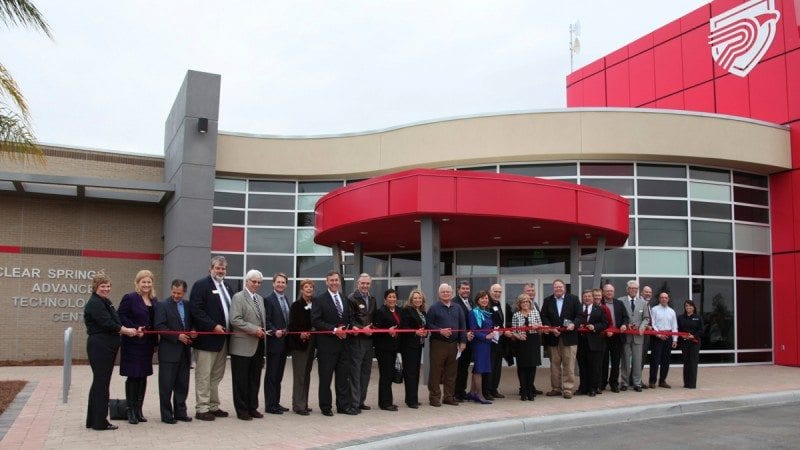 Supporters of the Polk State Clear Springs Advanced Technology Center cut the ribbon on the new building in January.

In celebrating the opening of its Polk State Clear Springs Advanced Technology Center, Polk State College also celebrated philanthropy — it wouldn’t have made sense to do it any other way.

Because the 47,000-square-foot building located east of Bartow stands not only as a high-tech training hub, but also of what can be accomplished when a community comes together to turn a vision into a reality.

“Employers and individuals, recognizing the huge impact this facility will have on the county for generations to come, banded together and gave generously. They made it happen, and we’re so grateful for it.”

The Polk State Clear Springs Advanced Technology Center — long before the first blueprint was drawn or the first shovels entered the ground — was a philanthropic undertaking.

In 2008, Clear Springs, a land company headed by chairman Stan Phelps, donated $12 million and 20 acres of land to the Polk State College Foundation. The gift was the largest in the history of the Florida College System, and served as the impetus for a years-long wave of giving.

“Having the Advanced Technology Center, which will create a more highly trained workforce, will be a huge help in bringing employers into the area. We are delighted to help Polk State College because we know in doing so we are helping the people of Polk County.”

Clear Springs’ transformational gift was followed by the Polk County Board of County Commissioner’s investment of $2.5 million to underwrite the infrastructure of the building — another generous boon for the project.

With the Clear Springs and county gifts, the building was a certainty — but just what it would contain was still uncertain.

Polk State Corporate College Director Rob Clancey envisioned a state-of-the-art learning center, where students would have access to real-world equipment and distance-learners would feel as if they were right there in the classroom.

To make that happen, the College knew, it would need even more support for the Center.

As it turned out, the community and other stakeholders were ready to give.

The College received $2 million in in-kind donations, including a $1-million process training unit from Rockwell Automation, a leader in industrial automation; Endress + Hauser, a supplier of measurement and automation equipment; TriNova, a provider of measurement and process services for a variety of industries; and AMJ, the Florida division of TriNova.

The PTU, a massive piece of equipment that involves tanks and valves and pipes, is exactly the same kind of equipment that students will use when they go to work in plants that process liquids, be it orange juice or wastewater.

From the Refrigerating Engineers & Technicians Association, the College received ammonia cooling equipment, which like the PTU will allow for applied, hands-on learning.

In addition to the $2 million in in-kind donations, the College received nearly $250,000 in support from area employers and individuals. Practically every room of the building bears the name of a local firm that gave to the cause.

A prime example is the Mosaic Auditorium, so named after The Mosaic Company gave $75,000 to the Polk State College Foundation.

The list of supporters also includes the Lakeland Businessmen’s Club, whose membership includes Doug Wimberly Sr., president of Lakeland’s ButterKrust Bakery, who serves on the Polk State Corporate College advisory board and who volunteered much of his time to fundraising efforts for the new Center.

Polk State College celebrated the opening of the Center with a standing-room only ribbon-cutting ceremony on Wednesday.

Holden praised all those who had contributed to the cause:

“Most facilities at Polk State and throughout the state college system were built exclusively with state funds,” she said. “However, one of the many extraordinary features of this building — a part of the story each of you must take with you today — is that this Center was constructed exclusively with private and local investments.

“And so the word that comes to mind — the concept that ties everything together — is this: vision. It takes extraordinary vision to plant a tree whose shade you might never enjoy.”

Phelps added that the Center will forever change the educational landscape of Polk County.

“The Advanced Technology Center will help graduates gain a 20-yard head start in their 100-yard dash to success,” he said.

Bo Davis, senior vice president of phosphate operations at Mosaic, echoed those sentiments, saying that the facility will allow the Corporate College to deliver even more advanced education, thereby creating an even more highly skilled workforce.

The Center is located at 310 Technology Drive, just east of Bartow — where 50 years ago this year Polk State College first opened its doors — another point of pride highlighted during the ribbon-cutting event.

The Center, in addition to housing the Polk State Corporate College, will house high-tech degree programs such as Engineering Technology and Supply Chain Management.

The building will serve more than 7,000 students annually.