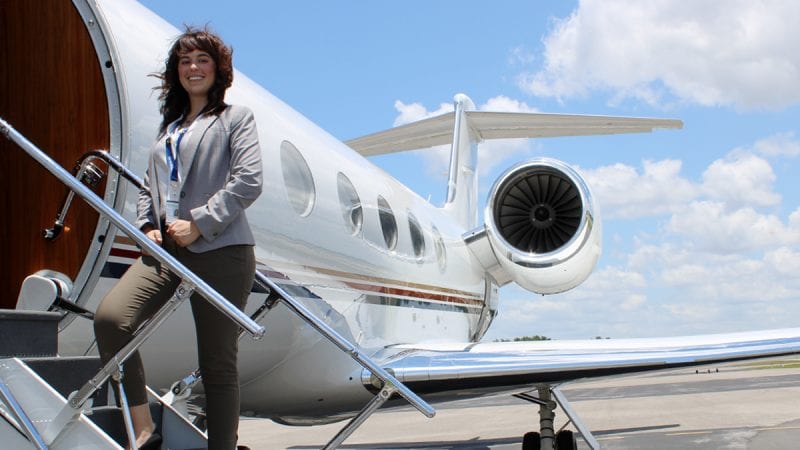 Whether she’s tending to the needs of nearly 200 pilots, working on $6 million in airport improvement projects, or hosting dozens of hot air balloon aviators on her “days off,” Ashley Udick is successfully filling the role of Winter Haven Regional Airport interim general manager with more than eight years of aviation experience and a Polk State College education.

Udick, who received her Polk State Associate in Arts degree in 2011, is accomplishing all of this while she pursues a Polk State Bachelor of Science in Aerospace Sciences with a concentration in Aerospace Administration – a program she says is teaching her skills she can apply in her everyday life, despite the on-the-fly nature of her job.

“What I enjoy most about my role here at the airport is that I have the opportunity to do something different every day,” said Udick, who assumed the interim position in February while General Manager Alex Vacha is deployed with the U.S. Army flying medical evacuation helicopters. “What I like most about Polk State Aerospace is the affordability and the flexibility I have to take my classes online while I work – I learn something new every day.”

Some suspect Udick’s passion for aviation is genetic. Her grandmother worked in airport operations for nearly 60 years and her father retired from a 21-year career with the U.S. Air Force. Her love was sealed when she and her father attended an air show in Alaska.

“Ever since then, I’ve really had a fascination with airplanes,” she said.

She graduated from Lakeland High School with high honors and pursued a short stint at Embry Riddle learning how to fly before she realized she would rather serve the aviation industry on the ground.

“I knew that advancing my education would help me become a general manager by 30,” said Udick, who turns 31 in July. “The understanding of airport operations I have been able to build through Polk State Aerospace allowed me to reach my goal.”

“Ashley’s story is one of many that shows aspiring aerospace students that a bridge does exist from their love for airplanes to jobs in the aviation industry.”

“Polk State Aerospace takes students’ passion for aerospace and turns it into rewarding careers,” he said. “Ashley’s story is one of many that shows aspiring aerospace students that a bridge does exist from their love for airplanes to jobs in the aviation industry.”

And the industry is growing locally and globally.

Aircraft manufacturer Boeing predicts a need for 790,000 new civil aviation pilots and 754,000 new maintenance technicians across the world by 2037. For North America, the outlook is 206,000 pilots and 189,000 technicians in the next 20 years. Boeing has conducted this study annually since 2012, and each year the predicted need rises with growing demand for air travel as well as booming e-commerce.

Polk County is no exception to this growth. Lakeland Linder recently transitioned from a regional to an international airport with a U.S. Customs and Border Protection facility. Additionally, Winter Haven Regional Airport plans to undergo more than $6 million in development projects during Udick’s one-year tenure to handle anticipated growth.

The Winter Haven airport had 79,775 operations – takeoffs and landings – in 2018 and the airport’s master plan predicts a 2.3 percent average growth per year over the next five years. Additionally, the airport has 128 T-hangars, 25 conventional or corporate hangars, four general use buildings, 62 marked tie-downs, and 140 based aircraft on the field with plans to add 30 more based aircraft.

“We are grateful to have Ashley as part of our team and we value Polk State’s ability to train knowledgeable, highly-skilled professionals to fill our local workforce needs.”

“Ashley’s management experience in airport operations paired with her Polk State education makes her an incredible asset to the airport and the City of Winter Haven, especially during a time of exponential growth,” City Manager Mike Herr said. “We are grateful to have Ashley as part of our team and we value Polk State’s ability to train knowledgeable, highly-skilled professionals to fill our local workforce needs.”

Udick may be serving in the interim, but Herr said a permanent position will be available for her when she completes her current assignment.

“In the future, I’d love to serve at a fixed-based operator in Hawaii, but I’m still relatively early into my career and have a lot of knowledge and experience to gain,” Udick said. “I’m thankful that I have the opportunity to do that here in Winter Haven and through Polk State College.”