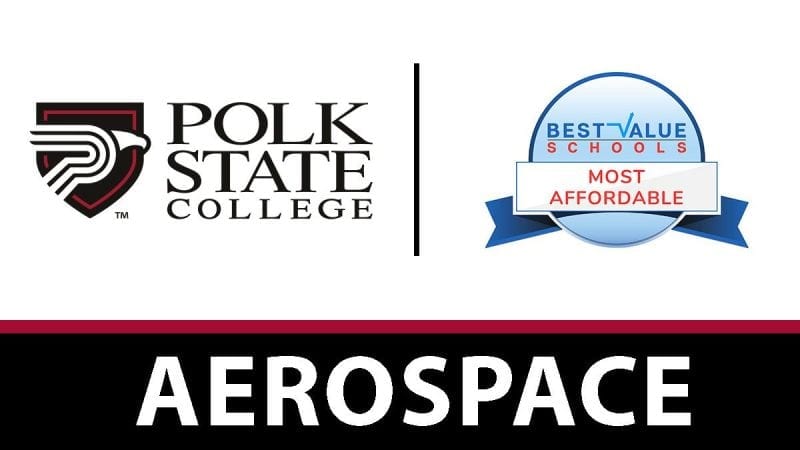 At Polk State, students have the ability to achieve a Bachelor of Science in Aerospace Sciences online for as little as $7,819 a year.

“Polk State understands the value of a bachelor’s degree in the aviation industry,” Best Value Schools wrote in a press release. “Whether students want to work in administration or as a pilot for a major airline, a four-year degree is essential for success.”

The ranking included public and private not-for-profit colleges and universities that offer aeronautic and aviation degrees online for an average of $25,000 or less a year. Due to the limited number of aerospace degree programs available online, the pool of options was not large enough to justify a multifactorial ranking system to place institutions based on a list of specific considerations, Best Value Schools explained.

“But Polk State Aerospace is dedicated to providing students with the highest quality of aviation education and training at an affordable cost,” Polk State Aerospace Director Eric Crump said. “Traditional pilot schools and aerospace degree programs are expensive, with the average cost of a bachelor’s degree reaching $135,000.”

“When Polk State became the first public institution in Florida to offer a Bachelor of Science in Aerospace Sciences, the College upheld its mission to provide access to affordable, quality higher education,” Crump added, “and with the ability for students to take courses online, a four-year degree is now more accessible than ever for aspiring pilots and airline operators.”

“Polk State understands the value of a bachelor’s degree in the aviation industry. Whether students want to work in administration or as a pilot for a major airline, a four-year degree is essential for success.”

Polk State offers its Bachelor of Science in Aerospace Sciences in two areas of concentration: Aerospace Administration and Professional Pilot. The College also offers Associate in Science degrees in those two areas as well as in Aviation Maintenance Administration.

The quality of the program saves students time and money and prepares them for in-demand, high-wage careers. For example, students save as much as $50,000 in their pursuit of their Airplane Transport Pilot certificates thanks to the Federal Aviation Administration’s authorization to certify Polk State graduates at a reduced number of flight hours.

“It’s what the students get in addition to the day-to-day curriculum that really boosts the value of this program,” Crump said. “We pride ourselves on providing these opportunities at a fraction of the cost.”

That’s a sentiment shared by all of the programs at Polk State, where 80 percent of students graduate with zero student-loan debt and go on to earn wages, on average, 2.3 times greater than the average entry-level wage for Polk County.

“The success of Polk State Aerospace is illustrated by the great accomplishments of our students who go on to work for local airports, major airlines, and aviation companies, from flying planes to unmanned aircraft systems, or drones,” Crump said. “Our students come to us with dreams of flying planes and working in aviation, and we are able to put them on a path to achieving those goals in an affordable, timely manner without sacrificing the quality of their education and training.”