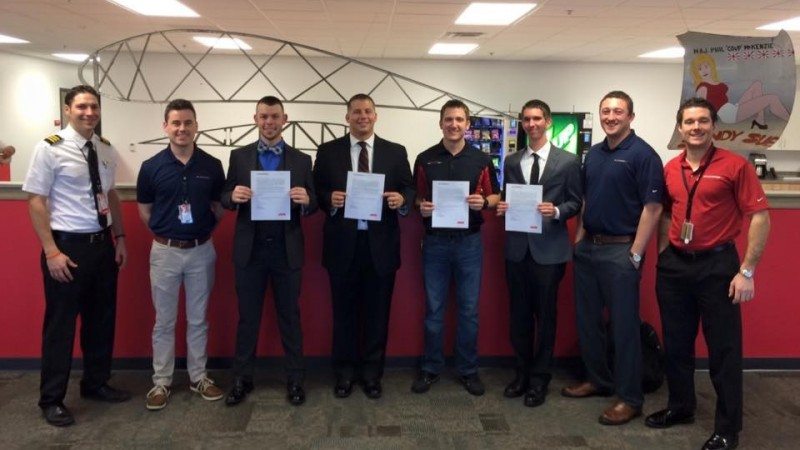 Seven Polk State Aerospace students now know where they will land after graduation: in jobs with ExpressJet, one of the world’s largest regional airlines.

“It’s a relief. Two years ago, I didn’t know what I wanted to do with my life. Now I’m about to have a degree, and I have a job waiting for me when I’m done. It’s an awesome feeling,” said John Reichert, a Lakeland resident pursuing his Associate in Science in Professional Pilot Science degree.

In fall 2015, Polk State College partnered with ExpressJet to become one of about 50 colleges and universities in the nation participating in ExpressJet’s Airline Pilot Pathway Program, or AP3 for short. AP3 extends numerous benefits to students, including preferential hiring benefits.

Last week, ExpressJet made its first hiring visit to Polk State. All seven students who applied to the airline received conditional job offers.

ExpressJet First Officer and Pilot Recruiter Peter Ryan said he could not have been more impressed with the way Polk State students performed during the interview process.

“To be quite honest, the word exceptional comes to mind. The students did a fantastic job and the staff was immediately asking for feedback, which shows they care about the quality of the students. That’s why we’re so happy to be partnering with Polk State,” Ryan said.

In all of 2015, 54 students nationwide were extended job offers through AP3.

“I couldn’t speak any more highly of Polk State’s program. We partner with schools 10 times the size of Polk State, and we don’t get seven interviews, let alone seven for seven being hired,” Ryan said.

The seven students must first accumulate 1,500 flight hours. Then they will enter ExpressJet’s new-hire training. Upon completion of that training, they will begin their careers as first officers, also known as co-pilots. Ryan said the natural progression is for co-pilots to become captains with ExpressJet, and for captains to move on to positions with major carriers.

“We’re seeing all the work we’ve been doing start to pay off,” said Aaron Poidevin, a Plant City resident who will graduate with his Bachelor of Science in Aerospace Sciences this fall. “It’s a great feeling. It gives you a goal to work toward.”

In addition to Reichert and Poidevin, students receiving conditional job offers include:

Polk State Aerospace Program Director Eric Crump expressed his pride in seeing each of the first student-applicants be hired by ExpressJet.

“We thoughtfully entered into a partnership with ExpressJet last semester because we were really impressed with their company, their people, and their culture. Our students wanted to be a part of that, and now seven of them are already on their way,” he said.

“We work hard to build aerospace professionals. We offer relevant classroom and flight instruction based on industry input from innovative companies, including ExpressJet. It thrills me to see that training validated with jobs for our students, especially when it’s 100 percent of our students who apply.”