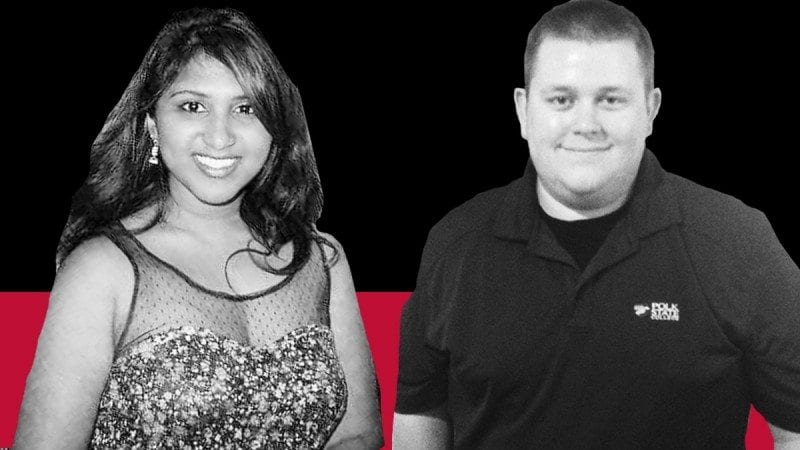 Polk State College will celebrate its 112th commencement ceremony on May 7 at 6:30 p.m. at The Lakeland Center. As graduation nears, News@Polk is profiling graduates to learn more about the paths they took to the commencement stage, their dreams for the future, and how Polk State has changed their lives. To suggest graduates who should be included in these ongoing profiles, please email news@polk.edu.

Diane Thomas’ journey to graduation day hasn’t been easy. In fact this final semester, when she held three part-time jobs while taking five classes, may have been one of the hardest yet.

Each time she felt that way, she closed her eyes, envisioned herself in her dream job, and got right back to work.

“I want to be the CEO of a hospital one day,” said Thomas, who will graduate with her Associate in Arts degree this semester.

When she graduated from George Jenkins High School, Thomas carefully calculated her options for higher education. Polk State made sense on so many levels, she said.

“It’s very affordable and it’s local. I had family who went to Polk State and they all had great experiences. They told me that if I came here, I would get everything I would at a university, but it would be less expensive right here in Polk County,” Thomas said.

At Polk, Thomas saved money on tuition and fees. Nearly as important, however, was that she was able to build her class schedules around her various jobs. The combination of affordability and flexible scheduling has allowed Thomas to earn her degree without taking on any student-loan debt.

Polk State proved a wise decision for her personal growth as well as her finances. Here, she served as vice president of Phi Beta Lambda and was also involved with both the Student Government Association and the Student Activities Board at the Lakeland campus.

From Polk, Thomas will move on to the University of South Florida to pursue her bachelor’s degree in public health. While she is now looking ahead to university life and advanced degrees, Thomas knows she will often look back and be grateful for the strong start she had at Polk State College.

“The administration at Polk State is amazing. The professors are amazing people. Even professors I never had before would stop me in the halls and chat,” she said.

John Ford: A Polk Degree and an Edge in the Aerospace Industry

John Ford didn’t have to go to college to get the job he wants, but he knew a degree from Polk State would set him apart from his competition.

It was that knowledge that kept him going, even while mourning his father and struggling with math.

“I really wanted something more,” said Ford, who graduated from Polk State Chain of Lakes Collegiate High School in 2009.

Fascinated by aviation, Ford originally planned to go into aircraft maintenance, a blue-collar field that didn’t require a degree. But after a time turning wrenches and greasing parts, Ford decided he was capable of more, and changed course to become a flight dispatcher.

“Dispatchers do all the paperwork for the pilots. They do the flight planning and the weather briefing. They brief pilots on their route. If you’ve ever had a delayed flight, that’s because the dispatcher told the pilot that they had to hold there for better weather. Dispatchers are like the captains on the ground,” he said.

To become a dispatcher, Ford didn’t need a college degree either; he could have gotten a job with his high school diploma and an FAA certification, he said.

“But it’s a lot easier to get a job with a college degree,” he said. “It’s definitely an advantage.

Ford will graduate this semester with his Associate in Science in Aerospace Administration.

His journey to the commencement stage, like for so many of his classmates, was far from easy. No doubt the most difficult time was in January 2014, when Ford’s father died of cancer.

“I dedicate my graduation to my father,” Ford wrote in his graduate accolades form to the College.

Ford also struggled with math for much of his college career, and at one time was spending two hours a day working with both College and private tutors.

Ford plans to move on to the Sheffield School of Aeronautics in Plantation to obtain his FAA certification.

“I had to work really hard to get here, but I know it was worth it,” he said.