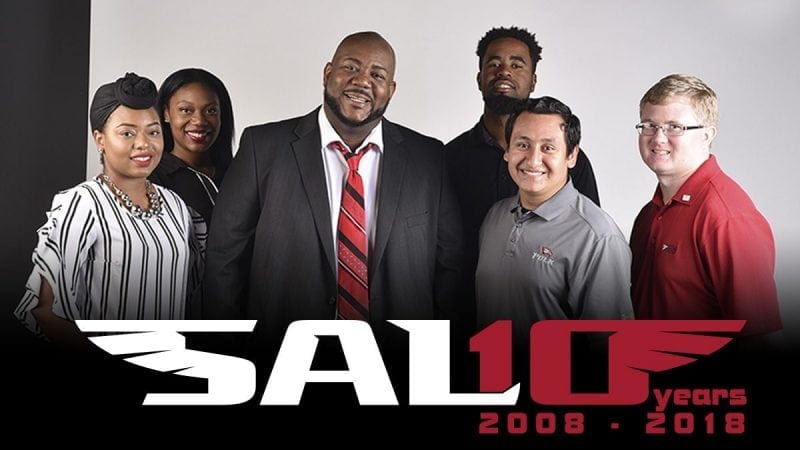 When Melvin Thompson signed up to be part of Polk State College’s inaugural ELITE class, coming up with a project to enhance the Polk State experience for students was a no-brainer for the Florida State University alum who participated in Student Government Association, served as a resident assistant, and worked in the Student Union.

Little did he know his idea to boost student life on the College’s campuses would become the Student Activities and Leadership Office – or SALO – which 10 years later is a pillar of Polk State’s culture that allows students to have the full college experience.

SALO has grown from 17 student clubs to 47; to three Student Government Associations (SGAs); and to two Student Activities Boards (SABs) that coordinate hundreds of events with more than 15,000 student visits in 2017-2018.

“Most people think SALO is just pizza, popcorn, bounce houses, and fun stuff, but it’s so much more than that,” said Thompson, SALO Director. “Students build relationships with each other and staff members who can help them. Students become connected to the College, which gives them the motivation to come back for another semester and gives them a better chance of graduating.”

“Most people think SALO is just pizza, popcorn, bounce houses, and fun stuff, but it’s so much more than that. Students become connected to the College, which gives them the motivation to come back for another semester and gives them a better chance of graduating.” – SALO Director Melvin Thompson

That connection and comradery is felt upon entering the SALO offices on both the Lakeland and Winter Haven campuses, where students are greeted by peers who are excited about the next event and latest leadership opportunity.

Like the students he serves, Thompson is always looking for the next leadership opportunity, and that was the case in 2007 when he joined the Exceptional Leaders with Innovative Talents and Excellence (ELITE) Educational Leadership Enhancement Program established that year. ELITE participants are tasked with developing and implementing projects that will have positive institutional impact.

At the time, Thompson was an academic advisor running SAB on a small stipend, and students often asked him why Polk State didn’t offer opportunities such as SGA and a larger variety of clubs.

“At FSU, I was always involved in student activities and campus life. Those experiences made me the person I am today, and they instilled in me the pride I have for my alma mater,” he explained. “I knew it was important for the College to have those opportunities for students to not only enhance the experience they have while they’re here, but to also give them a lifelong connection to Polk State.”

He sold administration on the idea, and in 2008, SALO and SGA were established on both campuses with Thompson as head of the organizations in Lakeland. Today, he oversees activities on the Winter Haven and Lakeland campuses as well as the Polk State JD Alexander Center in Lake Wales.

The last 10 years have been filled with success for SALO, with students and staff continuing to excel at state and national levels in professional and leadership activities.

“The SALO project has grown well beyond what we could have imagined since its implementation,” ELITE Director Valparisa Baker said. “SALO serves as a great example of how ELITE fosters leadership, professional development, and the enhancement of the Polk State experience, not only for staff, but also for students.”

“SALO serves as a great example of how ELITE fosters leadership, professional development, and the enhancement of the Polk State experience, not only for staff, but also for students.” – ELITE Director Valparisa Baker.

In 2015, Thompson received the Phi Theta Kappa International Administrator of the Year Award, and in 2017 he was a finalist for the FCSSGA Vee Servers-Choate Advisor Award, which recognizes advisors across the entire State College System for distinguished service and mentorship to student leaders.

“I always say the department is only as great as its students,” Thompson said. “SALO’s accomplishments are reflective of their hard work and commitment.”

Nearly 60 students and 12 work-study students operate SALO and lead the College’s clubs, which average about 20 students each.

Looking ahead, Thompson hopes that SALO only continues to grow. His five-year goal is to offer Polk State’s first educational fraternity or sorority, and to expand the types of clubs available at the College.

“Not every student wants to be in SGA, so I think it’s important to foster as many leadership opportunities as we can, including clubs with a variety of interests. If students don’t see a club that they are interested in, they can create one of their own, which allows them to take a leadership role, learn how to manage a budget, and develop other important skills,” Thompson explained. “I tell students that if they stick with SALO, they’re going to be great – 90 percent of student leaders graduate, and that’s huge. SALO is an integral part of the college experience and the path to success we strive to create for all students.”

“We’re a commuter school and people say we miss out on student life, but I don’t think that’s true,” SGA Lakeland Vice President Ciera Baldwin said. “SALO has helped me academically and financially; I’ve made lots of friends; and it has given me the support and motivation I need to achieve great things.”

“I tell students that if they stick with SALO, they’re going to be great – 90 percent of student leaders graduate, and that’s huge. SALO is an integral part of the college experience and the path to success we strive to create for all students.” – SALO Director Melvin Thompson

That’s also true at the Polk State JD Alexander Center, where student life has seen a recent boost in activity thanks to students stepping up to expand opportunities for their peers at the center in Lake Wales.

“We want students to be involved, more sociable, and supportive of each other,” SGA Polk State JD Alexander Center President Tytiana Foster said. “We can help the College toward its goal of making Polk State the first choice for Polk County residents by showing them that we offer the full college experience, including student life.”

“SALO and SGA give me the ability to do something more – to have a voice and to be part of brainstorming ideas that will positively impact the College and student life,” he said. “I encourage students to get involved and capitalize on the opportunities available to them at Polk State.”

Thompson said there is no better reward than the engagement and success of students.

“The best part is when students come back after they have graduated and tell me they remember that event or being in this club, and those experiences made them the person they are today,” he said. “SALO is proud to celebrate 10 years of engaging and motivating Polk State’s students, and we are moving ahead full force to continue providing great opportunities for our students.”