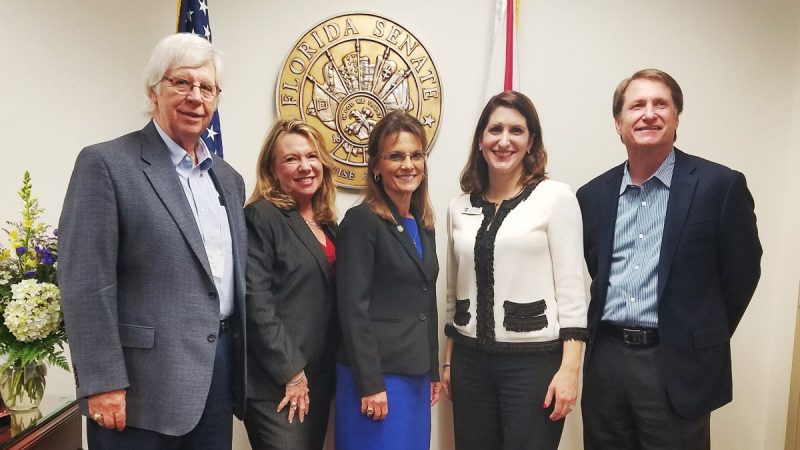 Polk State College President Angela Garcia Falconetti and members of the District Board of Trustees recently gathered in Tallahassee to meet with representatives from the Florida College System’s 27 other institutions, as well as engage in conversations about how to best promote their legislative priorities in the 2018 Legislative Session.

They also had the opportunity to meet with Polk County senators and representatives to make the case for support of students and the Florida College System.

“The recent trip to Tallahassee was a significant opportunity for us to share the needs of Polk State College and the Florida College System with state lawmakers,” Falconetti said. “I am very grateful for the time of our senators and representatives, including members of the Polk County Legislative Delegation and their continued support of the College.”

Each presenter cited the excellence of the Florida College System, noting that it is recognized by the 2017 U.S. News and World Report as the best in the nation for higher education. Additionally, each presenter underscored the critical importance of the Florida College System to the development and preparedness of the State of Florida’s workforce, highlighting the need to invest in order to support and grow the system. “Talent is quickly replacing tax incentives as the most important tool in the economic development toolkit,” Mark Wilson, President and CEO of the Florida Chamber of Commerce said. “Currently, there are 265,200 open jobs in Florida and 369,000 unemployed persons. The Florida College System plays an important role in addressing the skills mismatch.”

In a similar vein, Madeline Pumariega, Chancellor of the Florida College System, cited that 47 percent of Floridians ages 25 to 64 hold post-secondary credentials, while jobs being created in Florida require 63 percent educational attainment.

“We need to be investing more, not less, in the system,” Pumariega said.

These comments were particularly relevant as they came on the heels of a presentation by Palm Beach State College President and Chair of the Associate of Florida College Policy and Advocacy Committee Ava Parker, who asked that when District Board of Trustees members visit with senators and representatives of their local legislative delegations, they need to be confident in making the funding request for the Florida College System.

“We need to be investing more, not less, in the system,” Florida College System Chancellor Madeline Pumariega said.

“This year, we are asking for the Legislature to invest an additional $286 million for a system that serves over 800,000 students,” she said. “We feel confident in that number because it is based on a detailed needs assessment and reflects what is necessary in order to support our system.”

Trustees also had the opportunity to hear from many state representatives, senators and members of the Governor’s Cabinet.

Commissioner of Agriculture Adam Putnam’s remarks were met with a standing ovation. His comments to the group addressed his opposition to elements included in Senate Bill 540, which proposes changes to performance-measure metrics that affect funding, places caps on baccalaureate degree enrollment, and creates a separate State Board of Community Colleges.

Putnam thanked the trustees for their service.

“The flexibility and creativity that comes from local trustees seeing a workforce need and an opportunity and running with it are what makes our system great,” he said. “Another layer of government isn’t going to solve our problems.” He suggested that the need is for schools to focus on career and technical skills beginning in middle and high school, so that students have the option to earn industry certifications and move directly into the workforce, rather than feel that college is the only avenue to a well-paying job and career. Putnam’s message was that the state college system plays a critical role in preparing individuals to enter the workforce and be successful.

Additionally, he congratulated the audience on the success of the workforce baccalaureate programs.

“Nursing has been the number one for job openings every year for the past eight years in the State of Florida,” he said. “Why are we talking about curtailing baccalaureate degrees at the state colleges? We need more nurses and they are coming out of the state colleges, not the university system.”

“It is important for our local legislators and the community at large to understand the possible implications of Senate Bill 540,” Polk State President Angela Garcia Falconetti said. “I am grateful to our lawmakers for taking the time to hear our concerns.”

President Falconetti and members of the District Board of Trustees had the opportunity to advocate for Polk State College, expressing the importance of additional recurring funding to reduce the advisor-to-student ratio and improve services for students, as well as for funds to complete renovations to Building Four on the Winter Haven Campus. They also spoke about how Senate Bill 540 would impede the mission of Polk State College by restricting access to affordable higher education to the Polk County community and placing caps on baccalaureate education.

“It is important for our local legislators and the community at large to understand the possible implications of Senate Bill 540,” Falconetti said. “I am grateful to our lawmakers for taking the time to hear our concerns.”