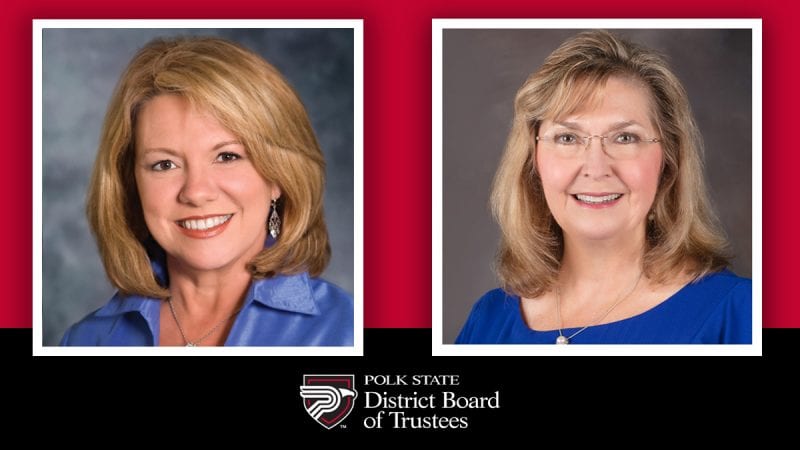 Polk State College’s District Board of Trustees elected Teresa V. Martinez as chair and Cindy Hartley Ross as vice chair for the 2019-2020 academic year Monday during its annual reorganization meeting.

Polk State President Angela Garcia Falconetti thanked Dorrell for his service as chair and congratulated Martinez and Ross on their new positions.

“Our District Board of Trustees is critical to ensuring Polk State’s continued success,” Falconetti said. “I want to underscore that we have phenomenal Board members who are experts in their areas and individuals with good hearts. I am grateful for their unwavering support of the College.”

Martinez, a Polk State Distinguished Alumna, was appointed to the Board in 2009. This is her third time as chair. She is a native of Cuba and president and founder of Institute of Spanish Communication Inc.

She has served on the boards of the Lakeland Area Chamber of Commerce, the Central Florida Speech and Hearing Center, the Imperial Symphony Orchestra, Club Hispano de Lakeland, Heart of Florida Regional Medical Center, and Polk Vision, and is a graduate of Leadership Lakeland and Leadership Polk.

“I am very honored to be a part of this family,” Martinez said. “I have been part of the Polk State family since 1973 and to serve our community alongside this Board and Dr. Falconetti as a fellow compatriot is truly an honor.”

Ross, also a Polk State Distinguished Alumna, has served on the District Board of Trustees for 15 years — from 1999 to 2011 and since 2015. This is her second time as vice chair. She has also served as chair as well as on the Polk State College Foundation Board and as president of the Polk State College Alumni Association. She is a Lakeland native and owner of Social Graces, a company specializing in etiquette and protocol training.

Locally, Ross is a member of the Polk Arts Alliance Art Resource Council and the Polk Museum of Art Board of Governors. She has also served on the Habitat for Humanity Advisory Board, Girls Inc. of Lakeland Board of Directors, Junior League of Greater Lakeland Advisory Board, and as a commissioner on the Florida Commission on the Status of Women.

“I am grateful to serve my alma mater,” Ross said, “as I have witnessed how Polk State College is an important tool leading to the success of our students, as well as enhancing the workforce throughout Florida.”

Members of Polk State’s District Board of Trustees, like those of Florida’s other state colleges, are governor-appointed and vested with oversight of College policies, facilities, budget, and personnel.

Board members serve four-year terms without compensation and meet on the fourth Monday of each month.