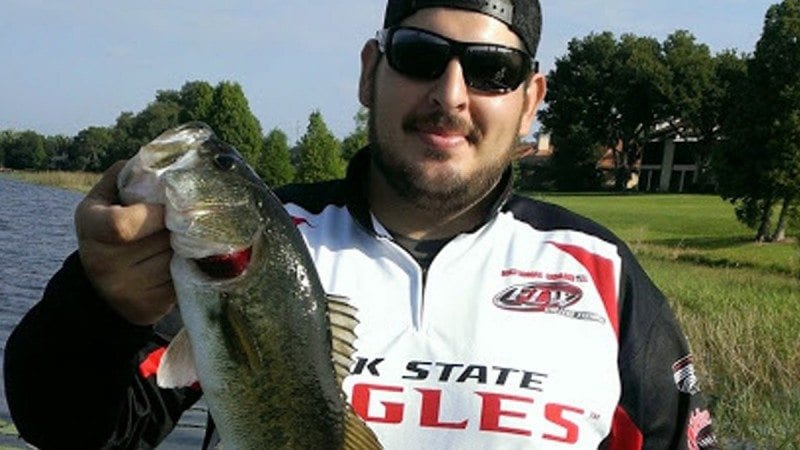 Andy Cruz displays a bass he caught in Winter Haven. Cruz is a member of Polk State's Bass Fishing Team, which has earned national rankings and spots in national competitions just two years after it began.

Polk State’s Bass Fishing Team is now ranked seventh in the nation, fifth in the South, and for the first time has qualified for the 2014 Carhartt Bassmaster College Series National Championship — remarkable accomplishments considering the team began less than two years ago.

“Some of these other colleges and universities have fished for years and years, and we have only just begun. Getting ranked in the top 10 and going to the national championship so soon are amazing accomplishments.”

ESPN Bassmasters determined both the seventh- and fifth-place rankings.

John Ferguson and Wesley Wise of the Polk team have earned a spot in the 2014 Carhartt Bassmaster College Series National Championship at Chatuge Reservoir in Georgia July 31-Aug. 2. The winning team automatically qualifies for the Bassmaster Classic professional competition, the sport’s ultimate event.

Polk also placed a team in the 2014 Carhartt Bassmaster College Series Wild Card tournament June 27-28 at Pickwick Lake in Florence, Ala. The winning team earns a spot in the national championship.

“We’re trying to pave the way for others. We want to grow the group and put Polk State on the map.”

A business student who attended Winter Haven High School, Bell says, “It has been rewarding to see fishing bring so much joy and to see guys come together and be a family now. We have great team spirit. We all support and cheer for each other.”

For Bell, “Fishing is more than just a hobby. It’s my life. I’ll probably end up with skin cancer, but it’s what I love to do. You can’t put a price on it.”

And speaking of price, while collegiate events charge no entry fee, team members must pay for their own boats and equipment, and most of their travel expenses.

“It costs a lot of money,” says Scott Tanner, team advisor and technology support supervisor. “It’s definitely an addiction, but it just makes you feel good.”

According to Tanner, “Fishing is quintessential Polk County. If you grew up here, it’s in your DNA. It’s your lifestyle. It’s what you do. Kids get a love of fishing from their parents, and anglers are like a family. We’re a tight-knit community, and we all respect each other.”

The Polk State club competes against colleges from across the country. All fish are caught under catch-and-release rules, must measure at least 12 inches, and must be alive at the time they are presented for weigh-in or a penalty is assessed.

While some people might consider fishing a leisure activity, there’s nothing leisurely about the world of competitive fishing.

“Sometimes you fish all day in the hot sun, and you’re worn out at the end of day,” says Andy Cruz. “If you’re bouncing around in a boat on choppy water, it feels like slamming onto concrete. And, unlike many other sports, when it rains or turns cold we stay out on the water.”

Cruz, a Lakeland High School graduate studying Criminal Justice Technology, wouldn’t have it any other way.

“On the water is my favorite place to be,” he says. “I have a 10-month-old daughter, I’m a full-time student, and I work two jobs, but I love fishing and I do it any chance I get.”

Tracy Tanner says, “It’s exciting to see students so passionate about fishing and willing to put so much into it. I’m not much of an angler, but seeing their passion for the sport has gotten me really excited about fishing.”

To raise awareness and attract new members, the team plans a fall fundraiser and a recruiting drive in area high schools.

“We want to show Polk State as option that can lead to a pro fishing career,” says Scott Tanner. “We need newcomers and high schools are the best choice. Lots of high schools in Polk County have teams — good teams.”

The Central Florida location offers a big advantage, he says.

“We sit in one of the best places in the nation to recruit anglers. Pros come here to fish. We have some of the top-ranked lakes in the country, including Lake Okeechobee and Lake Kissimmee. Fishing here at Polk State can become like basketball or baseball.“

The Polk State team enters seven collegiate competitions a year, plus club events in the summer. The team meets twice a month, and members must be full-time students. For more information call or text Austin Bell at 863.514.0288.

The Bass Fishing Team is one of more than 50 clubs and organizations offered through the College’s SALO (Student Activities and Leadership Office).