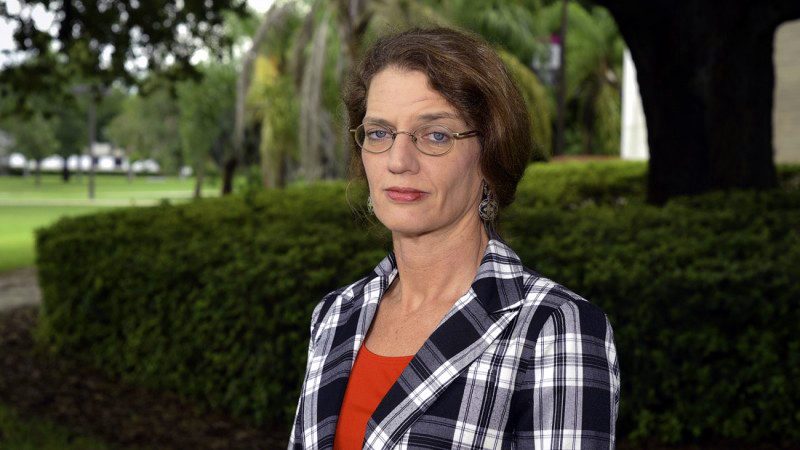 As students return to campus this week, one of the people they’re sure to meet is Chris Fullerton, director of Polk State Winter Haven’s Library and Teaching, Learning, Computing Center (TLCC).

What students may not realize, however, is just how deeply Fullerton can relate to them. Because it wasn’t that long ago that she was on the other side of the reference desk, desperate for help with research, and feeling, at times, utterly lost.

“I was into art and not much of a ‘joiner,’” Fullerton said, recalling her days as a Polk State student. “I had absolutely no idea what I was doing in college.”

Fullerton graduated from high school in Massachusetts, and soon thereafter, her parents decided to retire somewhere warm. So they came to Florida — and Fullerton followed.

During high school, Fullerton was a self-described “art freak,” who’d never given any thought to attending college. But once she settled in Polk County, she decided to give what was then Polk Community College a try. Turns out, this is exactly where she belonged.

“One of my first classes was Gary Baker’s Design I class,” Fullerton said, referring to the revered art professor who died in 2014. “I was an art freak and didn’t think people went to college for such a thing. I remember thinking, ‘Geez! Why didn’t anyone tell me about this college business earlier!’”

When she wasn’t making art in the studio, Fullerton could usually be found in the library.

“Before the internet, art students had to spend hours in the reserve room, looking at images for art history classes,” Fullerton said.

“It was then that I realized the value of what libraries do, and how important it is to organize, store and make available knowledge.”

Fullerton now had two passions — and eventually she would decide to pursue both.

From Polk State, Fullerton continued her education at the University of South Florida, where she earned a bachelor’s degree in sculpting. After graduating, she worked for a time as an artist, and while she wouldn’t “trade the experience for anything,” she soon realized that making a living in the field would be challenging.

That’s when she decided to apply for a job at her local public library. She got it. Then a few years later, she was hired for a part-time position at Polk State Lakeland’s library. That was in 1999. She’s been here ever since, adding a master’s degree in Library and Information Science to her resume in 2000 and becoming director of learning resources and the TLCC at Polk State Winter Haven about a decade later.

It may seem like a stretch to go from sculpture to library sciences, but Fullerton said the two fields are both about whittling away excess to create something of meaning.

“Think about the research process that we’re so fond of in the library. You start with a big chunk of something — an idea, or a topic — and you take away bits and pieces, or you combine it with other meaningful bits and pieces, to create something entirely new to share with others,” she said.

“And sometimes, you tear things apart and put them back together to make a new and exciting thing.”

In the years that have passed since Fullerton first stepped foot inside the Winter Haven library, it has changed dramatically. Typewriters have made way for tablets. Slideshows have been replaced with mobile downloads.

“The convenience of today’s technology is mindboggling,” she said.

With the technological revolution, librarians have had to adapt, as has the library space.

As for the former, Fullerton said at one time, librarians were more akin to service providers, answering questions and gathering resources for students as needed. Now, as the breadth and depth of data have expanded exponentially, the librarian role is much more that of educator. Librarians today must teach students to be careful, critical connoisseurs of information.

As for how the library itself has changed, that will be obvious to Polk State students when the newly remodeled Winter Haven Library is unveiled in early January.

“It will be super fantastic,” Fullerton said.

“It’s been designed to be very user-friendly. There will be one service desk, so students won’t have to worry about where they should go to check out or ask questions or get help. All the librarians’ offices will be gathered around the service desk, so it will be easier to assist students during busy times.”

Also included in the library update: “Lots of places for group and collaborative work, as well as quiet areas for individual study,” she said.

For all the changes she’s seen from behind the reference desk, one thing remains the same: The Polk State librarians, just as they were in her days as a student, are “waiting for students to come in,” Fullerton said. “We’re here every day, ready to help them.”