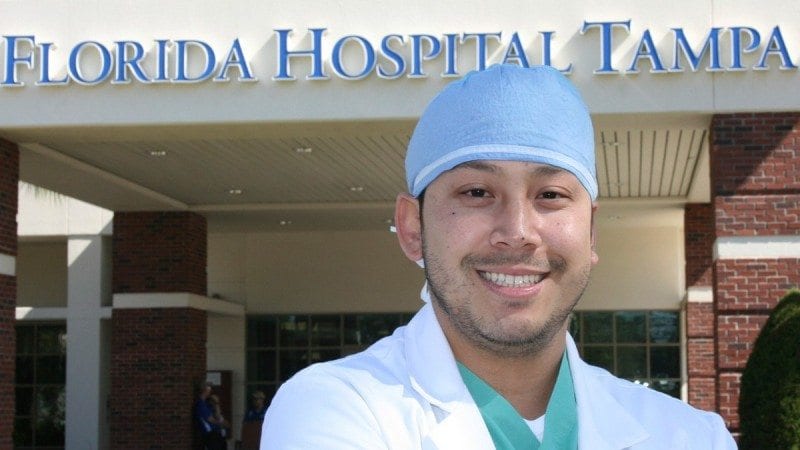 Rosevelt Nheik enrolled at Polk State College figuring he had nothing to lose.

As it turned out, he gained more than he could ever have imagined.

“I just really wanted to do more, to be more, than what was expected of me,” said Nheik, 30.

Nheik, the son of Cambodian immigrants, was born in California but moved to Polk County when he was 8. His mother is a cosmetologist. His father is a machinist. Neither went to college.

“Growing up, I had role models as far as work ethic, but not as far as going to college,” he said. “College just wasn’t something that was expected or talked about.”

As his graduation from George Jenkins Senior High School approached, however, Nheik started to ask himself this question: What if he defied everyone’s expectations and went to college?

He doubted himself, but he met with his high school guidance counselor anyway.

“I didn’t have confidence. I was struggling in high school. I thought college was just for smart people with money,” he said. “But I thought, I can always go get a job. That’s what everyone expected me to do anyway. Why not at least give college a try?”

Around that same time, a friend of his began talking about studying radiography. Nheik thought the field sounded interesting, especially the salary potential; according to the U.S. Bureau of Labor Statistics, the 2012 median salary for radiologic technologists was $54,620.

With the help of staff both at his high school and at Polk State, who helped him navigate the admission process, Nheik made it to his first day of classes. His confidence was still low, but that soon started to change.

“I was so terrified. I was taking Anatomy & Physiology. I was so stressed that one day, literally, my right eye was twitching,” he said. “It was a really hard class, but I did well, and that’s when I started believing that I could really do this.”

It wasn’t just his confidence that changed at Polk. Remember how Nheik originally pursued radiography for the paycheck? While studying at the College, he started to really love the field and the impact it would allow him to have on patients.

“Patients are scared and uncomfortable. They have to undergo treatments and tests that sometimes bring bad news. I try to make them as comfortable as possible. They’re sick and they need someone who will just treat them like people,” he said.

Nheik has been equally successful outside the classroom. He works as a radiologist assistant, which means he works directly under a radiologist, overseeing lower-level radiographers and performing advanced procedures, such as biopsies and thoracentesis (removing excess fluid between the lungs and the chest wall). He started a new position at Florida Hospital Tampa about two months ago.

Nheik ultimately plans to teach radiography — and he hopes he can make the kind of difference in his own students’ lives that his Polk State instructors did for him.

“I got a great education at Polk State,” he said. “I didn’t just learn the job, I matured so much as a person. I learned how to deal with life … If you’re like I was, and you’re afraid to go to school, don’t shortchange yourself. You can do it. You will find a way.”