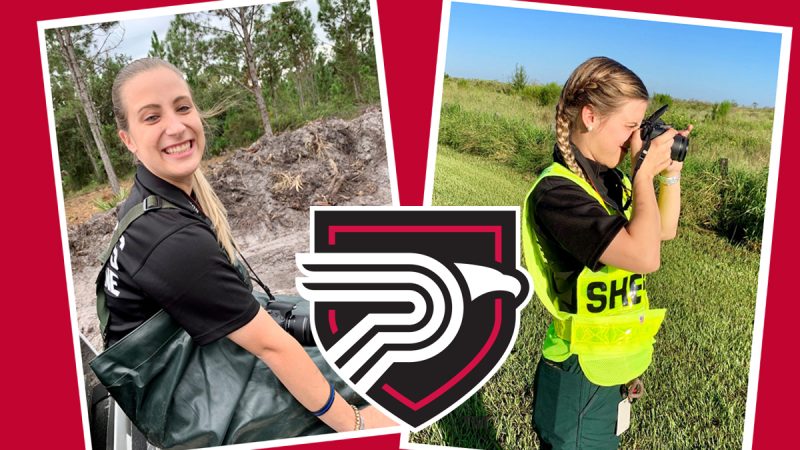 Karly King was at first unsure of what she wanted to do in life. She thought business, or maybe teaching. Then, she landed on something she is truly passionate about and turned that interest into not only a degree but also a rewarding career through her education at Polk State College.

King will achieve her Polk State Bachelor of Science in Criminal Justice degree this summer. And while she was planning to participate in the Spring 2020 Commencement Ceremony that was canceled due to the COVID-19 public health emergency, King still has plenty to celebrate, including her position as a Crime Scene Investigator with the Polk County Sheriff’s Office.

“Polk State’s Criminal Justice Program has given me the background and the foundation I need to be successful in my career,” King said. “On my first day on the job, I had a death investigation and I was freaking out. I wasn’t sure how I was going to react. But it came naturally to me and I realized quickly that this was the job for me.”

Although King is an accelerated learner who graduated from Polk State’s Chain of Lakes Collegiate High School in 2017 and is receiving her bachelor’s degree at 21 years old, it has been a journey filled with perseverance.

“Polk State’s Criminal Justice Program has given me the background and the foundation I need to be successful in my career.”

She’s not afraid to put herself out there, take a chance, and get back up if she fails.

King and her twin sister are the first generation in their family to attend college and they knew they were college-bound from an early age. But King wasn’t certain at the beginning of what she wanted to major in.

When she was a collegiate high school student, she began expressing interest in the criminal justice field – citing the TV show “Cops” and her desire to help people. She was introduced to Lt. Bobby Neil, retired Coordinator of College Security, and Sgt. Bobby Brigman with College Security.

“They were both huge inspirations to me,” she said. “They told me to get to know people and to let them know who I am – to show how interested I am in the field. Lt. Neil really pushed me and made me feel like I could handle this.”

So that’s what she did, without hesitation.

At 18, she applied for a part-time job with the Polk County Sheriff’s Office and started as a call taker for animal control.

“Not being the type of person who likes to sit around in one place for too long, after five months I moved to work in the kennels, where I was able to assist with in-taking animals and getting them adopted or back to their homes,” she explained.

During her first two years with the Sheriff’s Office, she took the opportunity to get to know other employees and learn about the different departments, like Lt. Neil and Sgt. Brigman encouraged.

All the while, she achieved her Polk State Associate in Arts degree and transitioned into the Bachelor of Science in Criminal Justice Program at the College.

“The bachelor’s program is completely online, which is what I like so much about it,” said King, who was able to balance her full-time job with being a full-time student.

“I absolutely love my job. I encourage students to put themselves out there and to not be afraid to explore different areas until they find what they truly want to do.”

As she progressed through the program and gained more on-the-job experience, she developed a particular interest in crime scene investigation.

When a position as a crime scene investigator with the Sheriff’s Office opened, she didn’t hesitate to apply, but she also wasn’t discouraged when she didn’t get it.

“I took it as an opportunity to show more interest and gain more experience,” King said. “That’s when I began doing ride-a-longs and shadowing other investigators.”

That helped reinforce for King that crime scene investigating was what she really wanted to do. And in September 2019, the opportunity to apply came again. This time, it was meant to be.

Polk State and the Polk County Sheriff’s Office have a longstanding relationship, with the College’s students and graduates serving as attractive candidates for employment due to the quality and rigor of its Criminal Justice and Law Enforcement programs.

“We have come to rely on the quality of Polk State’s graduates to enhance our agency’s reputation and capability,” Polk County Sheriff Grady Judd said. “We have built a unique and mutually beneficial partnership between the College and Sheriff’s Office to maintain a high-quality workforce pipeline. Their accredited law enforcement programs are top-notch, they produce outstanding graduates, and Polk County is better and safer as a result.”

King works four 10-hour shifts a week on a 28-day rotating schedule. Each day brings something different, whether she is working a scene, reviewing evidence from the shift before, or packaging and archiving evidence from closed cases.

“I absolutely love my job,” she said. “I encourage students to put themselves out there and to not be afraid to explore different areas until they find what they truly want to do.”

“We have come to rely on the quality of Polk State’s graduates to enhance our agency’s reputation and capability.”

And while there is no slowing down for King, who has been moving at an accelerated pace for years, she expressed that she is looking forward to settling into her position with the Polk County Sheriff’s Office and celebrating the completion of her Polk State baccalaureate degree.

“A lot of people get their degrees because they are looking to be promoted in their jobs,” she explained. “But for me, I’ve learned a lot and I continue to learn a lot of new things in my job every day.”

“I wanted so badly to get to where I am today and I am finally here,” she added. “My goal is to be the best crime science investigator I can be.”