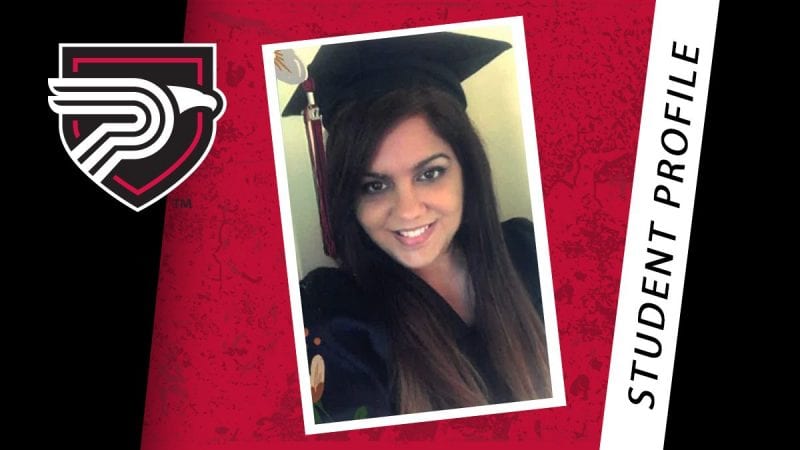 Nikki Torres was no stranger to life’s challenges in 2016 when she was diagnosed with sarcoidosis – an incurable auto immune disorder.

As a single mother to a son with autism who climbed her way up the career ladder working with disabled children, Torres has overcome many obstacles and, in December 2017, received her Polk State Associate in Arts degree despite her worsening health and inability to work.

“Between the Polk State College Foundation and the mental health services available at the school, I was not only able to complete my degree,” Torres said. “I was also able to process what was happening in my life, which was critical to my wellbeing.”

Torres recently spoke at the Foundation’s Donor Appreciation Luncheon, where she had the opportunity to meet face-to-face with the individuals who have supported her higher education pursuits during this tumultuous time.

“Between the Polk State College Foundation and the mental health services available at the school, I was not only able to complete my degree. I was also able to process what was happening in my life, which was critical to my wellbeing.”

Following the luncheon, Torres explained that she was bed ridden for two days due to exhaustion caused by preparing for the event and traveling from her home in Lakeland to the Winter Haven Campus. Her auto immune disorder plagues her with chronic pain and fatigue.

“But I wanted to go,” she said. “I feel like God has blessed me with so much throughout my journey and has put so many people in my life – some who are behind the scenes, such as Polk State’s donors, who have made achieving my degree possible.”

At the luncheon, Torres told the donors that the last two years have been the most difficult of her life.

“I am forever grateful for the mental health services offered by Polk State, with special thanks to Kim Pearsall, who has helped me through this process,” she said. “With her support and encouragement, I decided to try and graduate in the midst of this storm.”

When financial aid was not available, Pearsall referred Torres to the Foundation, and members were eager to help. The Foundation funded Torres’s final class and a laptop, since she takes classes online due to her chronic pain and fatigue. And when the e-book for her class was too difficult to use because of complications caused by her sarcoidosis, the Foundation assisted her with getting a hardcopy textbook.

The Foundation, which is currently accepting scholarship applications for the 2018-2019 academic year, awards nearly $1.5 million in scholarships annually, helping many students in situations similar to Torres’s.

Torres has been out of work for more than a year because of her illness and said her income is down 60 percent while she continues to visit doctors’ offices and care for her 16-year-old son.

But it’s not an unfamiliar situation for Torres, who couldn’t work or go to school when her son was younger because of the many therapy appointments she needed to attend with him. They were in and out of therapy eight times a week, she said.

It was her Early Steps family resource specialist who inspired her to pursue a career working with disabled children.

“She really helped me when I first had my son and we were dealing with his disability, and I thought, ‘I could do this, too – I could help other families and children,’” Torres said.

“I feel like God has blessed me with so much throughout my journey and has put so many people in my life – some who are behind the scenes, such as Polk State’s donors, who have made achieving my degree possible.”

She worked part time for nine years with Early Steps, allowing her to work around her son’s therapy schedule until he gained some independence. And in 2012, Torres enrolled at Polk State before receiving a full-time position with the Center for Independent Living, where she served as the High School High Tech Program Coordinator, helping prepare students with disabilities for life after high school. Under her leadership, the program earned the 2015 High School High Tech Program of the Year for the state of Florida from The Able Trust.

Her success led her to a director position with another organization, where she oversaw 20 counties in Central Florida, working with families and children with disabilities.

Then, she got sick.

“It felt unreal and it still feels unreal,” Torres said. “I have always been a health nut, working out and eating well.”

Doctors continue to test Torres for cancer, but so far she has only been diagnosed with sarcoidosis, which is the growth of tiny collections of inflammatory cells in different parts of the body. Much of the condition remains a mystery.

“I suffered from weird body aches, a swollen liver, and a fever for two weeks,” she explained of the onset of the illness. “I was hospitalized for a week, with my health getting worse and worse and the fatigue becoming unbelievable.”

The fever went away, but the symptoms remain.

“My independence, financial stability, and my identity have been ripped away from me,” Torres said.

But she is pushing through to work on a Bachelor of Applied Science in Supervision and Management with a concentration in Public Administration. She plans to return to working with disabled children and their families, and aspires to open a nonprofit organization in Polk County that will give individuals with disabilities a better chance at life.

She added that the challenges she has endured due to her illness have given her “a whole new level of understanding and compassion” for people living with disabilities.

“I’ve lived through different perspectives as a mother of a child with autism and as someone who dedicated her career to working with disabled children and their families, but now that I am enrolled as a student with a disability, I have a third, new perspective,” she said. “All of my experiences have given me the determination to move forward with my life.”

Torres went back to school for her son. And because her mother, who received her Polk State Associate in Arts degree in 2010 and her Polk State Bachelor of Applied Science in Supervision and Management degree with a concentration in Business Administration in 2014 at 65 years old, Torres chose Polk State. Her father, who has a master’s degree in Mathematics from another institution, also inspired Torres to achieve higher education.

“When your world is turned upside down, trying to navigate everyday life is difficult, but the services I have received at Polk State have made it possible.”

“I wanted to follow in my parents’ footsteps so that my son would be inspired to follow mine,” she said.

As for Polk State, Torres added that the College’s affordability and proximity to home were also factors in her decision to enroll.

“And I’m so glad that I did because the support I received at the College has helped me through this experience,” she said. “When your world is turned upside down, trying to navigate everyday life is difficult, but the services I have received at Polk State have made it possible.”