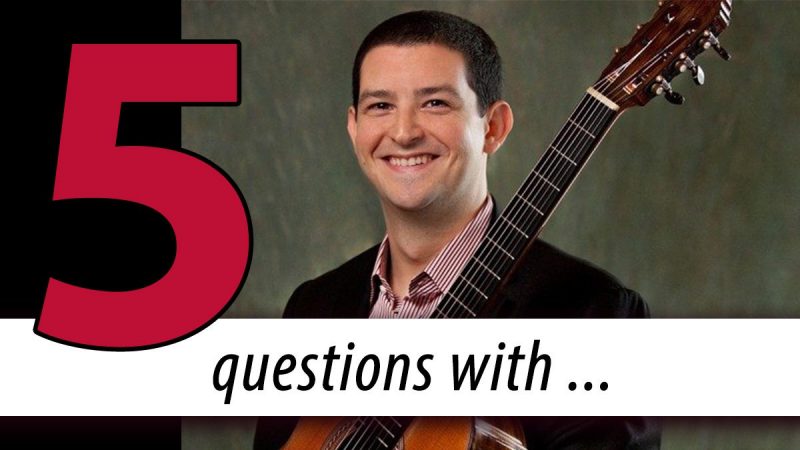 Julliard-trained guitarist Ben Pila joined Polk State in 2014 as a Music instructor, but this is his first semester as a full-time professor teaching Humanities.

This new responsibility isn’t slowing Pila down, though. He has several upcoming performances, from concerts at Bok Tower Gardens and Nora Mayo Hall, to Mahaffey Theater in St. Petersburg and The Metropolitan Museum of Art in New York City.

Pila is the only classical guitarist ever named a Presidential Scholar in the Arts, which is among a slew of other recognitions he has received. He has also performed for three U.S. presidents and Pope Francis, as well as semi-regularly at the 9/11 Memorial Museum.

Polk State News recently caught up with Pila to talk about balancing his passions for teaching and performing, as well as his upcoming concerts.

You have performed for Pope Francis and three presidents. What were those experiences like and how have they translated into the classroom?

“No matter how daunting something like playing for a Pope or president may seem, if you approach it step-by-step, thoughtfully and methodically, you can be successful. I try to instill that in my students.”

Those experiences were a little more exciting and nerve-wracking than my typical performances, but not hugely different. For any performance, I put in hours of planning, preparation and practice, and work hard to deliver my best.

There’s a quote from Benjamin Franklin, “Failing to prepare is preparing to fail.” That’s very true of the high-profile performances I’ve had the honor of giving, but also, almost everything in life. I try to relate that in my classes: if you wait until the last minute to do your assignments or to study for the test, it will show in your grade.

There’s another quote that I like to reference that goes, “Everything complicated is a combination of simple things.” The idea is that no matter how daunting something like playing for a Pope or president may seem, if you approach it step-by-step, thoughtfully and methodically, you can be successful. I try to instill that in my students.

Why did you decide to teach?

I always knew that I wanted to be a teacher and being a college professor is my dream job. I had some really excellent teachers in my life that influenced me in countless ways.  I love giving back and trying to accomplish the same thing with my students.

Most of my Humanities and Guitar students won’t build their careers in the Arts. They’ll go on to become nurses and firefighters, police officers and pilots. My intention is to instill an appreciation of the beauty in Michelangelo’s brushstrokes and Mozart’s melodies, and help students to become well-rounded individuals who will succeed in whatever they choose to do.

What can students expect from your courses?

In my Humanities classes, students experience a trip through time by studying the greatest hits of art, architecture, literature, and music.

We start with the ancient world dating back before Egyptian culture and the pyramids, and continue through every civilization or era until today: Greece and the epic poems of Homer, Rome and its Coliseum, the Middle Ages, Renaissance artists like Da Vinci, great composers like Bach, Mozart, and Beethoven, from the Baroque, Classical, and Romantic eras, respectively, as well as Modern artists such as Salvador Dali – just to name a few.

In my Guitar class, students can expect to learn the basics of finger-style guitar technique and to play songs from many genres including classical, flamenco, Spanish, and a variety of popular music.

What have you learned from your students and experiences here at Polk State College?

That where there’s a will, there’s always a way. My students have done some really exceptional things here at Polk State College. We had a successful Guitar Ensemble class that performed very challenging guitar quartets for the public last spring. Some of my students started learning guitar with little to no experience and, through hard work and perseverance, are now playing substantial songs and pieces – very well, I might add! One of my students, David May, won a top prize at the Symphony Guild of Winter Haven Scholarship Competition last semester.

What are you doing when you are not working at the College or performing your music?

This is my first semester as a full-time professor, so most of my time is dedicated to preparing for my classes, grading, and being available for students whenever they have a question or need extra assistance. My performances take up most of the time I have left over.

“My intention is to instill an appreciation of the beauty in Michelangelo’s brushstrokes and Mozart’s melodies, and help students to become well-rounded individuals who will succeed in whatever they choose to do.”

In between all that, I have a 3-month-old nephew, Davis, and two dogs, Kirby and Riley, who are just the cutest little guys.

I like the Tampa Bay Rays and pro football. One great thing about watching sports is that I can practice while the game is on (sounds like I need to get out more, no!?). Lately, I’ve been watching the NFL playoffs and even though I don’t really have a team in the mix (but, go Vikings!) I watch, sometimes practice, and play Fantasy Football with a group of friends. I also like – which is eerily similar to Fantasy Football – the stock market. I can’t buy too much on a teacher’s salary, but it’s fun to follow along and dream big!

Pila will perform a solo concert at Pinewood Estate at Bok Tower Gardens. More information is available at boktowergardens.org.

Pila will perform as a soloist with the Florida Orchestra as part of the world tour of “Distant Worlds: Music from Final Fantasy.” Tickets are available at www.ffdistantworlds.com.

May 11 | The Metropolitan Museum of Art, New York City

Pila will perform for museum members and play historical instruments.