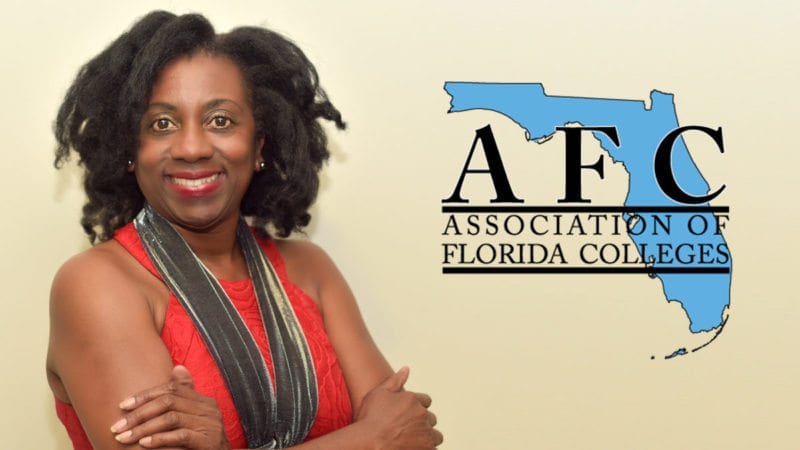 The AFC represents the employees, presidents, and trustees of the Florida College System, encompassing 28 state colleges in five regions. Campbell served in the Vice President-Elect capacity in 2016-2017.

“This was the next step for me and it is a huge goal accomplished,” Campbell said, “but more importantly it is a great opportunity for me to represent Polk State and I could not be more honored.”

“Polk State College strongly values its membership with the AFC and is honored to be recognized for the chapter’s accomplishments,” President Angela Garcia Falconetti said. “I also want to extend congratulations to Stephanie, who I am certain will continue to make Polk State and the Association of Florida Colleges proud as she serves as Vice President for Regions and Chapters.”

The Vice President for Regions and Chapters serves a one-year term and manages region-based activities; serves as a liaison among region directors, chapter presidents and the Executive Committee; reviews annual goals and objectives of the regions; and works with regions that need assistance.

Campbell’s goals include recruiting new members to the AFC and reaching out to inactive chapters to encourage them to become active again.

Polk State has one of the state’s largest chapters, Campbell said, with an average of 250 active members. Greg Harris, a professor of Psychology, leads the College’s chapter as President.

Campbell became an AFC member in November 2009 and has since been a tireless advocate for the organization.

The Winter Haven native joined Polk State in January 2009 as a grant specialist after a 23-year career with Polk Works. She was promoted in 2012 to Business Development Coordinator for Polk State Corporate College and was promoted again in October 2016 to Upward Bound Program Director.

Upward Bound prepares high school students for success in postsecondary education by assisting them in developing their academic and motivational potential. These students are first- generation from low-socioeconomic families to pursue college degrees. This year, Campbell and her team are working with 135 students from 13 local high schools.

In addition to her work with Polk State and the AFC, Campbell plans to return to school to complete a doctorate in Higher Education, which she started at Nova Southeastern University (NSU) but took a break from when she assumed her current role at the College. The first-generation-in-college student holds a master’s degree in Education and Administration from NSU.

Campbell told The Ledger in 2014 that she considers herself a lifelong learner.

“I love learning,” she said. “We all have to be because when we stop learning we become obsolete.”

“Stephanie is an enthusiastic leader who has continued to serve Polk State’s chapter and the AFC with her experience in education,” Falconetti said. “Her professionalism and knowledge of state resources will be great assets to the AFC regions and chapters.”