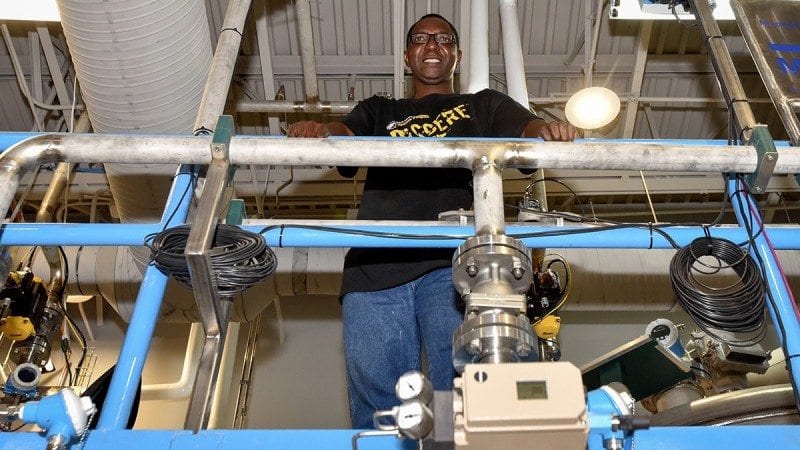 Johnson Olaitan earned his Associate in Science degree in Engineering Technology in 16 months thanks to the program's open-entry/early-exit format.

When he left his native Nigeria for the United States, Johnson Olaitan had a singular aim: to build a better life for himself and his family — and fast.

He settled in Polk County, enrolled at Polk State, and thanks to a new open-entry, early-exit degree program, which allowed him to take classes at a pace that matched his personal goals, graduated with his Associate in Science in Engineering Technology degree in just 16 months.

“The open-entry, early-exit format allowed me to take ownership of my education,” said Olaitan, who now works for a Lakeland-based manufacturer.

“I wanted to earn my degree quickly, to better myself and my family, and the system allowed that, but I could also have done it at a slower pace. Open-entry, early-exit allows you to get your education on the terms that are right for you.”

In 2012, Polk State College, with leadership from former director of applied technology Eric Roe, received a $900,000 grant from the National Science Foundation to convert its associate’s degree in Engineering Technology to the open-entry/early-exit (OEEE) format, a process that involved rethinking the traditional enrollment-to-graduation progression to account for the needs of both working students and their employers. Roe has since taken a position with at The University of Texas at Austin, but has remained involved in the OEEE project at Polk.

Indeed, in adopting OEEE, Polk State is keeping pace with universities and colleges across the country. Inside Higher Ed reported in 2015 that approximately 600 institutions were in the process of designing competency-based programs, up from just 52 institutions a year earlier.

First, all Engineering Technology program courses were converted from the traditional, three-credit-hour, 16-week format to one-credit-hour, competency-based modules. The modules are designed to be completed in a few days or several weeks — whatever the student prefers. Once students demonstrate mastery of a module, they move on to the next. Olaitan, for example, completed many of the one-credit-hour modules in just over two weeks, allowing him to achieve “early exit” after just 16 months.

The program’s modular courses also allow for students to earn industry certifications as they progress, including the Manufacturing Skill Standards Council’s Certified Production Technician, the foundational certificate for work in the manufacturing sector.

The “open-entry” portion of the new format refers to the registration schedule — or lack thereof.

To assist students in keeping their preferred pace, Polk State delved into the advising and admission processes, developing a system that allows students to register for Engineering Technology modules any day of the year, rather than having to wait for the start of a new semester. Once they successfully finish a module, students register for the next, and begin the course 24 hours later. Boyer said that, to her knowledge, Polk State is the only institution in the nation offering such flexible registration.

“This represents a shift from industrialized, mass-group instruction to a model that capitalizes on what students already know,” Boyer said.

Another defining feature of OEEE is that it blends online instruction with hands-on labs at the Polk State Clear Springs Advanced Technology Center. True to the “on your terms” nature of OEEE, students determine when they will log on to class or show up for lab; lab appointments are available between the hours of 9 a.m. and 8 p.m. Monday-Thursday, and 9 a.m. and 6 p.m. on Friday.

A less tangible but still noteworthy effect of the OEEE approach is the altered the role of faculty members in the Engineering Technology program. Because students are largely responsible for their own learning, they look to their professors more for mentorship rather than traditional instruction.

“It’s a great advantage over the traditional delivery system,” said Engineering Technology Program Director Mori Toosi. “Traditionally, students sit in a classroom and the professor delivers a lecture. Some students observe. Some fall asleep. Some are active. In OEEE, the professor interacts with the students on a one-to-one basis, as a mentor and live resource.”

OEEE went into effect in fall 2014, and is so far only available in the Engineering Technology program. Approximately 70 students are currently enrolled in the degree’s core courses, taking an average of two one-credit modules at a time and completing them in an average of three weeks.

Boyer said the College is working to convert general education and other courses to the OEEE format in the future, making it possible for even more students to earn their degrees at their own pace.

“Programs like this are good for students,” Boyer said. “It shifts the models of learning to empower the learner.”

And, it’s proving good for the College’s industry partners too:

“We believe that one of our most important assets is our highly skilled workforce. But finding workers with the advanced manufacturing skills needed in this industry is not easy,” said Jay Creasy, president of Lakeland’s JCMI/Quality Aerospace.

“The OEEE Engineering Technology Program addresses the need for employees with the technological skills to operate, maintain, and repair complex manufacturing equipment while providing a format that is more accessible to the working learner, allows for self-paced learning, and shifts the instructor-student relationship to one of mentoring rather than lecture. Based on these tenets, we would encourage other colleges with technical programs to explore competency-based, student-centered learning models.”