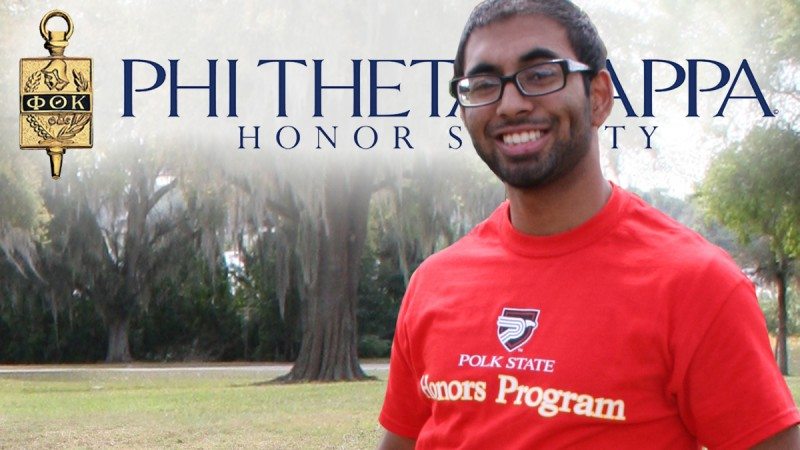 Slade Fernandes is the first Polk student to receive the Coca-Cola Leaders of Promise Scholarship through Phi Theta Kappa, the international honor society of two-year colleges.

He is the first from the College to ever win the award.

Winners of the Coca-Cola Leaders of Promise Scholarship are selected based on their academic performance and other criteria.

“Slade has worked very, very hard to advance both himself and Xi Pi, and we felt that he definitely deserved the award,” said Xi Pi Adviser and Biology Professor Anthony Cornett. “He really wants to make something of himself. He has a real desire to make sure that he is successful in everything he does.”

Fernandes, a resident of Davenport, will receive a total of $1,000 in scholarship assistance. He is one of 180 students in the nation selected for the Coca-Cola Leaders of Promise Scholarship.

Fernandes plans to earn his Associate in Arts degree from Polk State and move on to the University of Central Florida to study mechanical engineering. He is on track to graduate from Polk in summer 2014.

In addition to Phi Theta Kappa, Fernandes participates in the College’s Honors Program.

Members of Phi Theta Kappa  must have completed 12 college-level credit hours and have at least a 3.5 grade-point average. Members must maintain a 3.0 grade-point average. In August, Polk State Lakeland marked the establishment of a second Phi Theta Kappa chapter, Beta Upsilon Upsilon. Previously, the Xi Pi chapter served students on both campuses.