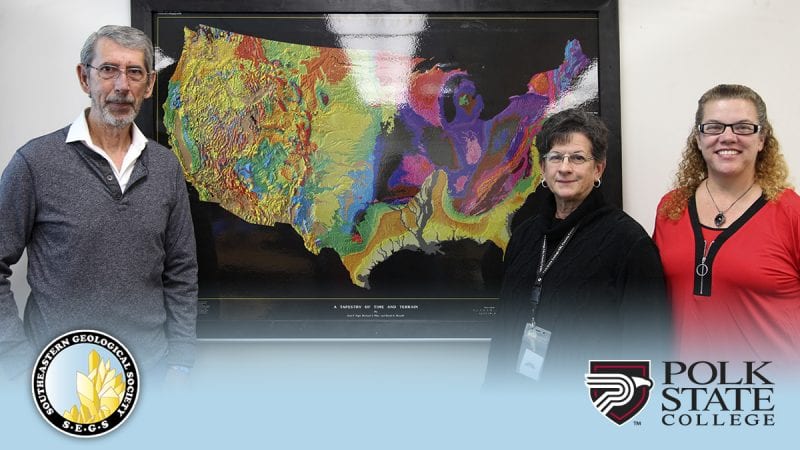 “The Southeastern Geological Society began participating in the Maps in Schools Project in 2006 to educate Florida students about the ages of rocks and how the Earth came to be over time,” Cook explained. “This allows us to understand the future based on the theory of uniformitarianism.”

Through a scale of colors created from data through Geographic Information Systems (GIS), the map shows the oldest formations in red, such as the rock in north Minnesota, the youngest formations in yellow, such as the Florida peninsula, and everything in between. The visual aims to encourage interest and curiosity in science and geology.

“This map is a great addition to Polk State’s Earth Science courses by giving a stimulating visual of how the continent is put together. This is a valuable asset for our students.”

The maps are laminated and framed through volunteer efforts and are delivered as gifts to science classrooms across Florida. The donation also includes access to a national database that allows students to share information about local geology and learn about other areas of the country. The program has donated more than 1,000 maps since its inception.

“For some schools, this program is the first connection to the Southeastern Geological Society,” Cook said.

But that’s not the case for Polk State, which has enjoyed a longstanding partnership with the society that has proven beneficial for both students and faculty.

They encourage students to become members of the society, which offers scholarship and extracurricular opportunities.

“The Southeastern Geological Society does a phenomenal job generating interest in the study of geology,” Moran said. “I can already see the variety of activities we will be able to do in our classes with this map.”

“This map is a great addition to Polk State’s Earth Science courses by giving a stimulating visual of how the continent is put together,” Whitcomb said. “This is a valuable asset for our students.”