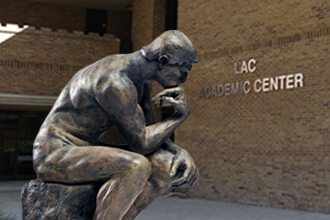 Polk State Lakeland’s Philosophy Club will delve deeper into the topics of racism and sexism this semester, with a slate of events that features several guest speakers — including a former Ku Klux Klan member.

The Club begins the spring semester on Jan. 29, with a panel discussion titled, “Women, Seriously,” planned for 3 to 5 p.m. in LLC 2188 on the Lakeland campus. Female professors from departments across the College will participate in the discussion, which is to be moderated by Humanities Professor LJ Russum.

The Jan. 29 is one of two events this semester that will tackle women’s issues. The other, the Club’s 2nd Annual Sexism Symposium, will be March 19 from 3 to 5 p.m., also in LLC 2188. Guest speakers for this event are still being selected, but Russum will again be the moderator.

Russum said both events will deal with sexism and ingrained stereotypes about women — like they belong at home, raising children, not in the workforce — and will be enlightening for all attendees, no matter their gender.

“For younger women, who are choosing careers and disciplines, it’s important for them to know what they’re getting into and the old stereotypes that are still in place,” he said. “If you’re a man — let’s say a man studying nursing — you’re also going to come up against all those stereotypes.”

Richard Harris, an assistant professor of general communication at Southeastern University, will be the guest speaker. Harris is a former high-ranking member of the Ku Klux Klan. He quit the KKK three decades ago after reading the Gospel of John. He went on to enter the ministry and write a book, “One Nation Under the Curse,” about his time with the KKK.

“Dr. Richard Harris brings to us the perspective of overt and covert racism against blacks by whites, from the perspective of a white man,” Menchan said. “As a high-ranking former Klansman, Harris knows only too well the hidden racist political agendas of this country and can share from that perspective issues that are hidden from the public.”

The Club’s Third Annual “ThaAink Tank” will be from 3 to 5 p.m. on March 5 in LLC 2188, with a discussion titled, “The Soft Revolution, or the Violent One? That Is the Question.” This event will be a continuation of a running discussion among Club members.

“We as a club are in a dialogue about whether violence is ever acceptable as a means of solving crises,” Menchan said. “We are considering whether or not a revolutionary mindset, one that wishes to overturn the status quo, should seem to use rhetoric only, or whether, when aggressed and threatened, turn the other cheek or meet fire with fire. We are, after all, as a country, engaged in wars, are we not?”

Menchan added that the Club’s ongoing discussion on violence was inspired in part by the hit movie, “Django Unchained,” in which a former slave enacts revenge on the captors who tortured him and his wife.

“There’s a human penchant to support military might in certain cases as acts of retribution,” he said.

Menchan will present another of his regular lectures from 3 to 5 p.m. on April 30 at Lakeland’s Coleman Bush building, 1104 Martin Luther King Jr. Ave.

“My final lecture of the season asks the question, should the contemporary African-American seek to sublimate the feelings that accompany ‘double consciousness’ — of being a racial outsider in his own American land, and thus spiritually overcome racial travesty — or conclude that the actuality of being an outsider is not there and be subjugated,” Menchan said.

Voices of the People

The Club’s spring season also includes the continuation of its “Voices of the People” Performing Arts Series, a joint effort with the College’s Student Activities and Leadership Office that pairs classical music with poetry readings.

The series, which launched in November, continues at 7 p.m. on Jan. 19 at the Polk State College Lake Wales Arts Center, with the music of Brahms performed by Menchan, also an accomplished cellist, Sarah Shellman, principal second violin with the Florida Orchestra, and Mark Harris, a San Diego-based pianist. Readings will be of the work of Heinrich Heine, a German poet.

The series then heads to Lakeland.

“Cellistic Wisdom” will take place at 7 p.m. on March 14 at the Polk Theatre. During this installment, internationally acclaimed pianist Byron Sean and Menchan will perform the music of composers Mendelssohn and Schumann. Readings will be of the works of Oscar Wilde.

“Voices of the People” wraps up with another Polk Theatre engagement, “The Insatiable Tempest,” at 7 p.m. on April 11, which will feature the music of Beethoven and poetry of Lord Byron.

Polk State Philosophy Club events and meetings are free and open to the public. “Voices of the People” events are free for students with ID; tickets for the general public are $5, with all proceeds benefitting the Club. For more information on any of these events, or to purchase tickets to the “Voices of the People” performing arts series, call Menchan at 863.669.2928.