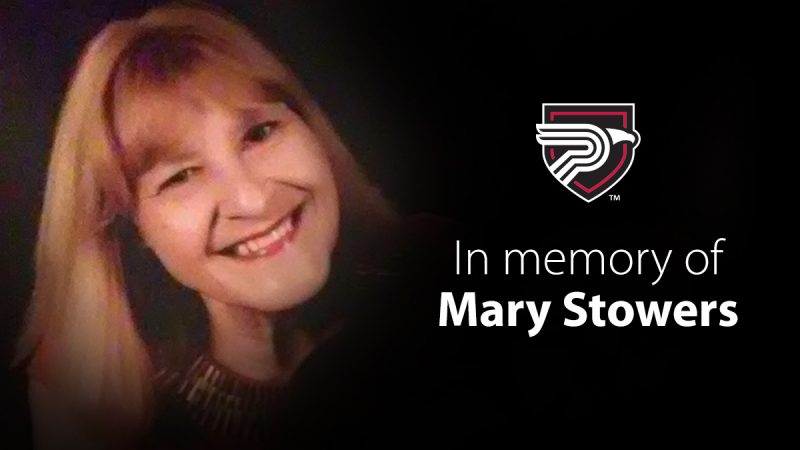 Mary Stowers dedicated her life to uplifting others by motivating them to reach their fullest potential and supporting them in their pursuits. She was a source of knowledge and positivity for both her students and colleagues and remained committed to her role as Professor of Early Childhood Education at Polk State College until her very last days.

Stowers recently passed away after 13 years of service to the College. She was on Zoom with her students only days earlier as they truly brought her joy and made her proud.

“Mary’s legacy is the impression she left on her students. She wasn’t just a professor, she was someone who wanted to build relationships with her students and be part of their lives,” said Debra Hazelwood, Coordinator of Early Childhood Education. “It was really important for her to be a part of her classes still. She had a passion for seeing her college students be successful.”

Hazelwood met with Stowers recently to help with her classes.

“It made her feel better to know that her students were going to be taken care of,” Hazelwood said.

Stowers joined Polk State as an adjunct faculty member in 1995 and served in that capacity until 2002 before she returned in 2015 and became a full-time professor in 2016 when the College launched its baccalaureate degree programs in Early Childhood Education and Elementary Education.

With years of diverse experience working with both children and educators, as well as a Doctorate in Education from Nova Southeastern University, Stowers was an asset to the Polk State Education team.

“She gave herself completely to helping guide students through not only academics but also in becoming strong and accepting people,” said Sharon Kochanowski, Interim Director of the Education Program.

Many described Stowers as having a heart for children and serving as an advocate for their wellbeing. Her background included working in mental health and with at-risk youth, from serving the Polk County Public Schools Head Start Program to United Way of Central Florida’s Master Teachers Program.

“She wanted to improve the quality of children’s lives; to be part of a change in our education system to reach more children, including those children who may fall through the cracks or somehow be overlooked,” Hazelwood explained. “She had a focus on special needs, too, and was influential in the discussions early on here at the College to ensure it was an area that became part of our Education degree programs.”

“Mary’s legacy is the impression she left on her students. She wasn’t just a professor, she was someone who wanted to build relationships with her students and be part of their lives.”

Angela Bottom, Polk County Public Schools Local Education Agency Facilitator and former Polk State adjunct, worked with Stowers over the course of more than 30 years. Early in their careers, Bottom was serving as an Exceptional Student Education (ESE) teacher while Stowers was a mental health counselor.

“She was my saving grace in knowing how to work with students with significant challenges,” Bottom said. “The students that were most difficult for teachers – the students who may drive you crazy or tear your room apart – those were the students Mary gravitated toward and wanted to help the most.”

They pursued their doctorates together and co-authored the books Love Notes: Nurture Activities for Families and Caregivers and Quest: Activities for the Pursuit of Empowerment.

“Mary understood how to nurture and emotionally support others. She was the brainchild behind our books which provide families with activities to empower parents and their children,” Bottom said. “Mary had a wide skillset, including writing, editing, and communicating. I wish I had the vocabulary she had to talk about how great she really was.”

“She was such an inspiration and a light that people were drawn to,” Cribb said. “She always helped people to think bigger; to think of the possibilities or to see things in different ways. She was knowledgeable. She was full of love. She was magical.”

Colleagues echoed Stowers’ ability to nurture and support others on their paths to success.

“Mary had the gift of making others the best versions of themselves,” Bottom said.

For Virginia Richard, Learning Technologist for Polk State’s Collegiate High Schools, Stowers had this influential impact on her life during their 28 years of friendship.

“Mary had the gift of making others the best versions of themselves.”

“I think of her as my guardian angel because my mother’s name was Mary and died shortly after I met Mary. To have another Mary in my life with a lot of characteristics like my mother made me feel like our friendship was meant to be,” Richard said. “We went to church together, we raised our kids together, and she encouraged me to go back to school and get my college degree.”

Stowers was there throughout Richard’s higher education journey, serving as a cheerleader, helping her when she became stuck on a concept and providing motivation when she needed it.

“She was always a positive person and wanted others to look for the positive in situations, too,” Richard explained. “She would always say, ‘it’s how you look at it, you can make something positive out of any negative situation.’ And that really shaped how I view things.”

Richard knew this to be true through the impact Stowers had on her students as well.

“They always shared with me how knowledgeable and inspiring she was,” Richard said. “She changed a lot of lives, and she certainly impacted my life.”

“There wasn’t a negative bone in her body, she was an educator at heart, and her kindness will live on.”

She added that Stowers was extraordinarily proud of her son and three grandchildren, who she also inspired to pursue their higher education.

“She loved them very much,” Richard said. “She had a deep, unconditional love for people and was an all-around great person. There wasn’t a negative bone in her body, she was an educator at heart, and her kindness will live on.”