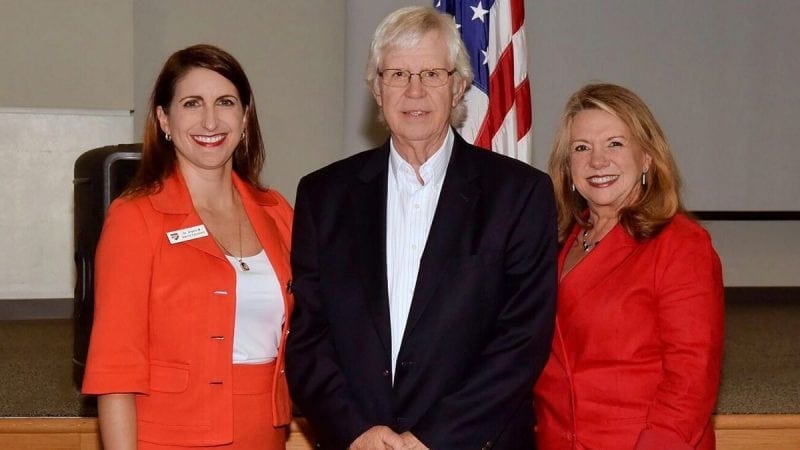 Polk State College’s District Board of Trustees elected two of its members to serve as chair and vice chair for 2018-2019 during its annual reorganization meeting Monday.

Polk State President Angela Garcia Falconetti expressed special thanks to Turner for his service as chair and excitement that Dorrell and Martinez have assumed their new positions.

“I am thrilled as we move ahead into another academic year under the phenomenal leadership of our District Board of Trustees,” Falconetti said. “The Board’s unwavering support of the College allows us to provide exceptional higher education and services for Polk State’s students, faculty, and staff.”

Dorrell, a member of Polk State’s first graduating class, was appointed to the Board in 2011.

He is a retired certified public accountant and holds a bachelor’s degree in Finance from Florida State University, as well as a Polk State Associate in Arts degree. He is also a veteran of the Florida National Guard.

Martinez, a Polk State Distinguished Alumna, was appointed to the Board in 2009.

She is president and founder of the Institute of Spanish Communication Inc., and holds a bachelor’s degree in Spanish and Education from the University of Central Florida in addition to a Polk State Associate in Arts degree.

Martinez has served on boards for organizations including the Lakeland Area Chamber of Commerce, the Central Florida Speech and Hearing Center, the Imperial Symphony Orchestra, Club Hispano de Lakeland, Heart of Florida Regional Medical Center, and Polk Vision. She is also a graduate of Leadership Lakeland and Leadership Polk.

Members of Polk State’s District Board of Trustees, like those of Florida’s other state colleges, are governor-appointed and vested with oversight of College policies, facilities, budget, and personnel.

Board members serve four-year terms without compensation and meet on the fourth Monday of each month.