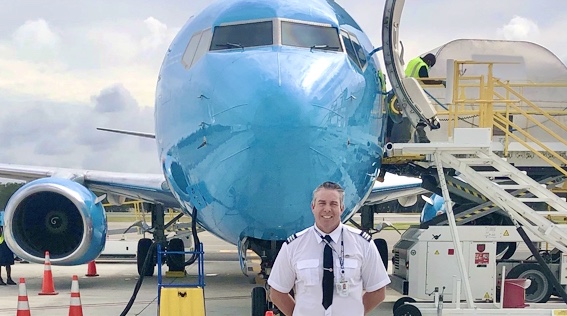 The extent of John Margaritondo’s experience in aviation when he enrolled in Polk State College’s Aerospace Program in 2016 was jumping out of planes as a machine gunner in the Marine Corps. Now he is flying one of the largest and most complex aircraft for Amazon through Southern Airways.

Out of high school, Margaritondo completed a bachelor’s degree in Criminal Justice on a swimming scholarship and worked as a mortgage broker before the 2007 recession. He entered the military and found himself at a crossroads when he completed his service and was working as a swim coach. A Google search sparked his interest in flying.

“I knew nothing about airplanes other than jumping out of them,” he said. “When I started researching aviation, I found Polk State and that the College takes the GI Bill, which allowed me to get all my certifications and finish my bachelor’s degree.”

“Students may be looking at these big jets and thinking it could never happen, but it’s definitely possible. Polk State put me far above pilots from other schools.”

He achieved his Bachelor of Science in Aerospace Sciences with a concentration in Pilot Sciences in 2018. He worked as a flight instructor for Tampa Executive Airport and American Aviation Flight Academy before flying for Silver Airways. He was operating Saab 340s – approximately 30-passenger planes – for the Florida-based regional airline when he decided he wanted something bigger.

Today he is flying Boeing 737s, which are nearly five times the size of the planes he was operating previously.

“Students may be looking at these big jets and thinking it could never happen, but it’s definitely possible,” Margaritondo said. “Polk State put me far above pilots from other schools.”

He compared the Polk State Aerospace Program to his experience in the Marine Corps in terms of discipline. Margaritondo’s dedication and work ethic is evident in the words of advice he provides for aspiring pilots.

“Never take your nose out of the book,” he said. “It’s all about studying in aviation. Every six months we need to maintain our ratings so study, study, study.”

Margaritondo, who lives in New Port Richey, enjoys experiencing different parts of the country through his job.

Saturday morning, he woke up in Ontario, California at 3 a.m., took flight at 6 a.m., and landed at Lakeland Linder International Airport at 2 p.m.

“They’re long days but I’m flying a lot,” he said. “I applied for the job at the right time because after I got hired with Southern Airways, COVID-19 hit and caused furloughs across airlines.”

While the public health emergency has restricted commercial, passenger travel, the demand for cargo aircraft continues to increase. Amazon Air recently increased its fleet to more than 80 aircraft, in part because of demand for shipments as a result of the pandemic.

“With Polk State College’s Aerospace Program and our aviation high school, the Central Florida Aerospace Academy, the pieces and partnerships are in place to provide the pathway and opportunity for our local students to build a career in the aviation industry.”

The Polk State Aerospace Program is housed at the College’s Airside Center East on Airport property. The College is a proud partner of Lakeland Linder International.

“At Lakeland Linder International Airport, when we talk about sustainability, it is all about ‘how do we sustain our aviation industry?’” said Airport Director Gene Conrad.  “With Polk State College’s Aerospace Program and our aviation high school, the Central Florida Aerospace Academy, the pieces and partnerships are in place to provide the pathway and opportunity for our local students to build a career in the aviation industry.”

“Mr. Margaritondo’s success brings full circle what we are collectively doing at the airport with our educational and industry partners,” he added.

It brings everything full circle for Margaritondo as well.

“It feels surreal flying into Lakeland because it is where I first started flying Piper Warriors out of Polk State,” Margaritondo said. “Now I am flying 737s in and out of there, and I got here in such a short amount of time. I received my private pilot license in 2016 and here I am now, in 2020, flying the plane I always dreamed of.”