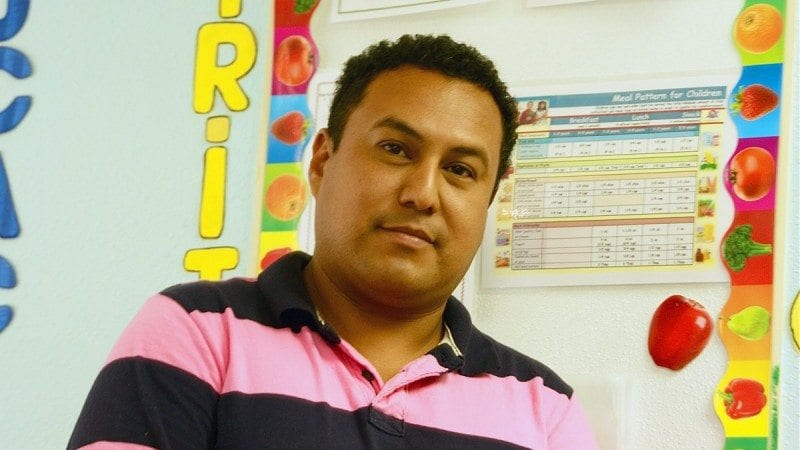 As a baby, he slept in a picking sack tied from the tree branches. As a toddler, his playpen was a fruit crate. When he outgrew the sack and crate, he started to fill them, orange by orange, for hours a day.

“I really can’t think of a better way I could have grown up,” said Jaime, 33, a resident of Haines City. “There was a sense of family in the groves. Me, my mom, my brothers, we were always there together.”

But there was a hard side to his childhood too. Money was tight. The work started before dawn and lasted until after sunset. Every few months, the family was on the move, following the crops up the Eastern Seaboard. Sometimes housing wasn’t available when they needed it; Jaime can remember curling up on those evenings to sleep in the family car.

When Jaime’s mother told him that the only way out of the groves was to get an education, he listened. In 2013, he graduated with his Associate in Science degree from Polk State’s Early Childhood Education and Management program. Now, instead of picking mature fruit, he is shaping the lives of young children as a center director with the East Coast Migrant Head Start Project.

“I love what I do,” said Jaime. “I love being able to talk with families and to relate to them. I went through the things they’re going through. I was at the bus stop at 6 a.m., waiting to get to the fields. I did better for myself. I got an education. When they look at me, they see they can get an education and do better for themselves, too.”

Jaime was born in Winter Haven, the youngest of five boys. His mother, Paula, was single and supported her children through migrant agricultural work.

Paula always made education a priority. No matter where the family was come fall, whether they were picking squash in North Carolina or harvesting tobacco in Georgia, she always enrolled her boys in school.

Each year, the family eventually returned to Winter Haven for the citrus crop. By the time he was a junior at Winter Haven High School, Jaime had accumulated enough credits to graduate, but he delayed, instead aiming to finish with honors the following year.

That summer, while picking apples in Michigan, Jaime’s mother injured herself climbing down a ladder. Jaime knew he couldn’t drag out his education any longer. He got his GED, and in late 1998, enrolled in Polk State with the idea of one day becoming a physical therapist.

Instead, by 19, Jaime was married with a young child. Like his mother, he supported his family by working in the groves and, as the seasons changed, the fields farther north.

He enrolled his child — he now has four, ranging in age from 7 to 14 — in the Head Start program offered through the Redland Christian Migrant Association.

RCMA is a nonprofit organization based in Immokalee that serves 20 counties throughout the state, including Polk.

Jaime’s children attended the RCMA center in Wahneta. There, Jaime was elected as the parents’ representative. Soon, he was a state-level voice in issues related to RCMA.

In 2005, he formally went to work for RCMA as a family support worker in Polk County.

“He worked directly with the families, helping them to reach whatever goals they had set for themselves, whether it was obtaining a driver’s license or becoming more involved in their children’s school,” said Lourdes Villanueva, director of farmworker advocacy for RCMA, who has known Jaime for several years.

After his stint as a family support worker, Jaime was quickly tapped to become a center director for RCMA in Pasco County, then to lead the opening of two new centers in Ocala.

“He is young, but he is wise,” Villanueva said. “He is very respectful and has good people skills. He’s always willing to go the extra mile. I also think it helped a lot of dads to see a man in that position. They saw that it’s OK to be involved in their children’s education. A lot of people think ‘that’s the mother’s job.’ Daniel is the type of person who, when he sees something that needs to be done, he gets it done.”

Based in Arlington, Va., East Coast Migrant Head Start was established in 1974 and provides services in a dozen states from Florida to Maine.

Jaime is the center director of the organization’s La Familia Center in Dundee.

La Familia, a nondescript building divided into nine brightly colored classrooms, serves as many as 125 children from low-income, migrant families each season; La Familia’s season is typically October to June.

Most of the children who attend La Familia take a bus to Dundee. They come from Lakeland, Frostproof, and all points in between. They are as young as six weeks and as old as 5 years.

During its season, La Familia employs about two-dozen early childhood educators, who deliver age-appropriate, dual-language instruction in preparation for kindergarten. In addition, La Familia provides health and dental screenings, referral services to a wide variety of state and local agencies, plus two full meals and snacks every day.

All of La Familia’s services are free to the families.

As center director, Jaime oversees every aspect of La Familia, from evaluating teachers, to representing the East Coast Migrant Head Start Project in the community, to compiling federally mandated reports during the off-season.

“Daniel has a deep understanding of the challenges migrant families face and he is able to really connect with them,” said Kathleen Winters, senior director of quality assurance and ancillary services for East Coast Migrant Head Start.

Winters now works in Raleigh, N.C., but she supervised Jaime early in his time with East Coast.

“With his leadership, he’s brought together all the services La Familia provides so that everyone is working together. People in general tend to think that their work is the most important, but we all need each other to serve our families.”

Along those lines, Jaime said he loves working with children — you just have to in his line of work — but almost equally, he loves serving as an inspiration to his staff.

“If I was working in the fields, had a family, was not stable financially, but was still able to graduate from college, they can too,” said Jaime, who is now pursuing a bachelor’s degree in early childhood education.

His personal story aside, the very fact that Jaime is a male working in a predominately female field makes him an instant role model for other men interested in working with young kids. Jaime has two men on his teaching staff. With his encouragement, Jaime said, they’ve embraced the early-childhood field.

“They had to be told that it’s OK to get up and sing and dance in front of the class, and run around with the kids, and now they’re enjoying it. You see them changing diapers and playing ball,” Jaime said.

“This field needs more men. Young kids respond so well to male teachers, and a lot of them really need a man to look up to, because they may not have one in their life.”

Jaime hopes to continue influencing migrant children and their families, and on an even bigger scale. His career goal is to one day become the CEO of the East Coast Migrant Head Start Project or a similar organization.

“I really believe I can achieve that,” he said. “I started in the orange groves, and look how far I’ve come.”

Polk State College’s Early Childhood Education and Management program offers an Associate in Science degree, as well as training that leads to a variety of state certifications. For more information, visit polk.edu/earlychildhood.