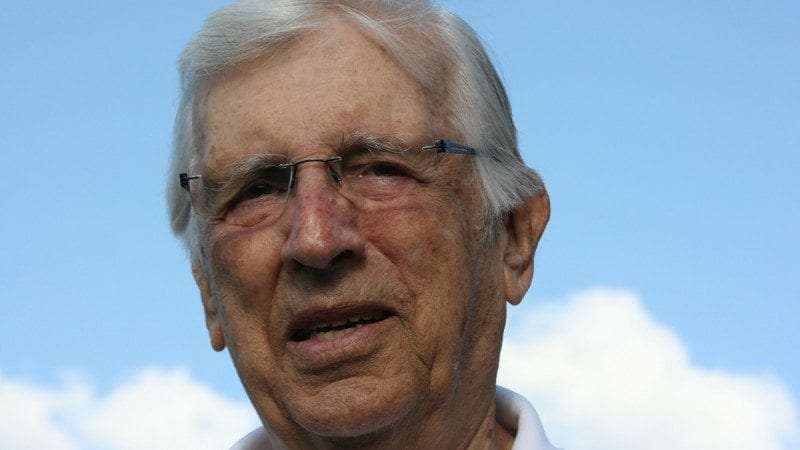 Bob Henne was hired as the College's first faculty member in 1964.

In the summer of 1964, Bob Henne climbed into the passenger seat of a friend’s car, willing to tag along on the two-hour drive from Bradenton to Bartow.

The pair rumbled along, across a swath of Florida that had yet to see strip malls and standstill traffic, headed for a soon-to-open college.

Henne, though he had no idea at the time, as the mile markers ticked by outside his window, was also headed for a two-decades-long career in higher education and a prominent role in Polk State College history.

“I had never heard of Polk County at the time, but when I got here, I knew this school was going to be great,” said Henne, 84 and now a resident of Lake Wales.

Back in 1964, Henne accompanied a friend interviewing for a faculty position at what was then Polk Junior College. The friend didn’t have a master’s degree. Henne did — a Master of Education from Ball State University — so founding President Fred Lenfestey offered him the job instead.

Just like that, purely by chance, Henne became the College’s first faculty member.

He would spend the next 22 years teaching physical education and coaching baseball, basketball, golf and tennis. He would see the College open the doors of its temporary campus at the Bartow Air Base, then expand to permanent locations in Winter Haven and Lakeland.

All the while, he would watch thousands of students go on to brighter futures because of their start at Polk.

Here, Henne recounts the early days of the College, and the impact it made in this community from the very start.

Why did you accept President Lenfestey’s job offer?
I had been teaching since 1951. I started in Indiana, then moved to Florida and had been teaching at Bradenton Southeast High School for three years. This friend of mine heard about Polk Community and came over for a job interview. I was just along for the ride. President Lenfestey showed us around the Air Base, and it seemed like a fabulous place to start a school. There were classrooms where the Army used to train pilots, and there were the barracks, which were going to be the faculty offices. President Lenfestey asked my friend if he had a master’s degree, and my friend replied, “I’m working on it.” Then he looked at me and said, “Do you have your master’s degree?” I did, so he asked if I wanted to come work him. He told me how much I would be paid — $3,500 a year. That was $1,000 less a year than what I was making in Bradenton, but I was adventurous at the time, and I saw the potential of moving into higher education. It was an opportunity to advance.

You were hired to teach physical education, but soon became a coach, too. How did that happen?
When I went to interview with President Lenfestey, he told me the College was not going to have athletics. I could live with that, but I also had a feeling that would change fairly quickly. It was within the first few weeks of school that he came back to me and said that we should start an athletics program because the students really wanted it. There were two physical education teachers at the time, Charles Harris and me. Charles took basketball and I took baseball, and we got started.

What was it like starting a baseball program from scratch?
The first season, we only played eight games. We kept the schedule real minimal. Our budget for baseball and basketball was only $300, which had to pay for uniforms, equipment and referees. That was not a lot of money. We borrowed our baseball pants from the American Legion, and I bought T-shirts that said “Polk.” We also just had four wooden bats. The very first day, one of the players broke three bats, so that set us back a little. We also had to use our own cars to get to games. It’s not like today, where the whole team gets to travel together in a bus. We would have five or six kids crammed into a small car. The facilities were also a challenge. At the Air Base, we had a softball field, so that’s where we practiced, not on a baseball field.

You also helped coach basketball. What do you remember from the early days of that program?
We had a gym with a wooden roof. It was a pretty good place to practice and play. One night, about 11 p.m., I got a telephone call from the security guard at campus. He said, “Coach, your gym’s roof has fallen in.” The roof had rotted and the weight of all the rain we’d had at the time had pulled the whole roof down. The next day, the building inspector condemned it. From then on, we had to play and practice wherever we could find a court.

The College’s Winter Haven campus started to take shape in 1968, and by the mid-1970s, it included the Health Center, a permanent home for athletics. How did that facility change the programs?
We finally had a real home, so that was a huge step forward, of course. The Health Center, though, was also a shelter for the community. At the time that the College opened, and pretty much the entire time I worked there, the nation was in the Cold War. I remember I had to go to training on Saturdays to learn how to secure the building if we had to use it for shelter. I also had to learn how to deliver a baby, because if people were there for any length of time, chances were good someone would go into labor. It was a scary time.

You had not previously taught a black student before coming to Polk, which was integrated from the day it opened. Was that hard for you? Did that present any challenges?
We really didn’t have any problems with that. President Lenfestey was very careful to hire the right kind of people, and he was all about equality. He didn’t want there to be any discrimination in athletics or anywhere in the College. I remember there was a basketball tournament in Orlando, and all the other schools were segregated. President Lenfestey wouldn’t let us play unless all our players — even the one black student on the team — could participate. The tournament organizers eventually agreed to let us play.

What was the most challenging thing about coaching at a two-year school?
Most athletes, when they go to a junior college, don’t think they should be there. They think they should be playing on a scholarship at a Division I school. We had to break that attitude down. Then we could help them develop to the point that they could move on. I saw many of our athletes move on to play at schools such as Florida Southern and the University of South Florida, but they had to work hard with us to get there.

What did being a part of Polk from the very first day mean to you?
I loved working with the kids. It was great being with them, and I wanted to give them everything I could. I loved that place.