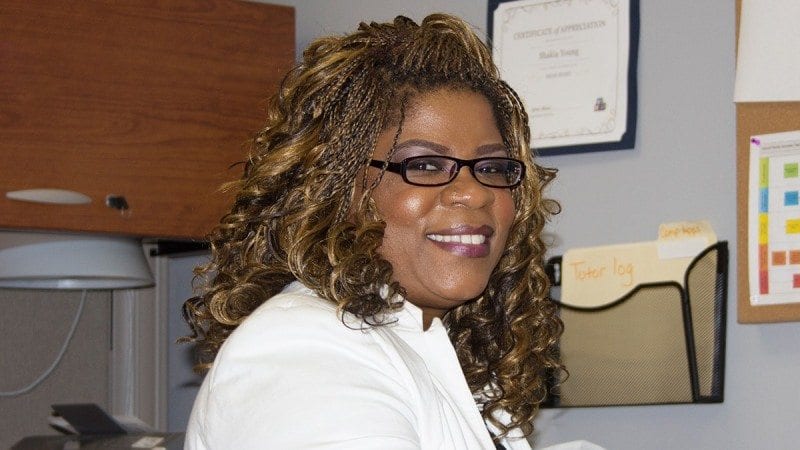 Polk State College’s history is filled with stories of people who have changed their lives through the power of higher education.

But few of those stories can compare with that of Sha’Kia Young.

Hers is a true turnaround story. Once a college dropout, she is now preparing to graduate with her Bachelor of Applied Science in Supervision and Management degree. Once unsure of how she would provide for her children, she now owns a public relations and database management company. Once the kind of person who might have told others, “don’t make the mistakes I did,” she is now an in-demand inspirational speaker.

The difference, Young said, between her old self and who she is today: Polk State College.

“Polk State has become my family, my friend. It’s my everything,” she said. “I would not be the mother I am, the student I am, the worker I am, if it weren’t for Polk State.”

Young graduated from Kathleen High School and immediately set off for Bethune-Cookman University in Daytona Beach, where she studied criminal justice with the goal of becoming a juvenile probation officer. During her first semester, she got pregnant, dropped out, and returned to Lakeland to raise her baby.

Sadly, the baby lived only nine months. Heartbroken, Young couldn’t imagine returning to college and picking up the life she’d lived before motherhood. Instead, she enlisted in the U.S. Navy. She served six years.

“I learned the value of education in the military. The Navy, I think, is the most education-oriented branch of the military. You don’t get promoted to a new rank just because of how long you’ve been in; it’s based on your education,” she said.

When Young left the service, she ended up back in Florida, first in Jacksonville and later in Polk County, but rather than going back to school, she fell into a career as music industry publicist. A former classmate at Kathleen was a rising rap star. She reached out to him. He hired her. And more clients followed.

“The problem is, there’s no money in it,” Young said. “The people I was representing were up-and-comers. They didn’t have a budget for me. It was like, if they make money, they’ll pay me.”

That lifestyle, for Young, who’d since had two more children, was unsustainable. While she brushed shoulders with rising stars, she was living in public housing. She knew she had to make a change.

It was around this time that Young learned the identity of her father. All her life, she’d suspected that her father was a longtime friend of her mother’s. But her mother had died when she was a teenager, leaving Young with a lifetime of questions and no answers.

“I reached out to this family friend and we decided to get a DNA test. He was my dad,” she said.

At 35 years old, the pieces finally started coming together for Young. Her father, she learned, had made his living in computers, which explained her lifelong interest in technology. With his urging, she decided to return to college to pursue both a degree and a more financially secure future.

“That was the best thing that could have happened for me at that moment in my life,” she said. “I had always been interested in computers and had even taught myself some programming. But once I knew who my dad was, I understood where it all came from and I was able to own it and build a life on it.”

Young shopped around for a college, deciding on Polk State for two reasons: the quality of its Associate in Science degree in Computer Systems and Business Analysis, and the fact that its affordable tuition, combined with her military education benefits, would mean she could return to school without incurring any student-loan debt.

Young knew early in her very first course that she had made the right decision.

“It was a programming course, and I was in awe. I was amazed that what you did behind the scenes in code could build a website. It was like solving a puzzle and learning a new language,” she said. “It made me feel powerful. This is something that most people don’t know how to do. It was like I created a monument.”

During the course of studying for her associate’s degree, Young interned at the Winter Haven Economic Development Council, where she gained experience building databases and the professional development she needed to start her own business.

She opened Young PR LLC, a database management and public relations company, in 2014. She also works as a computer applications tutor at the College.

A few months after going into business, Young graduated with her associate’s degree and immediately enrolled in the Bachelor of Applied Science in Supervision and Management program. She will graduate with her BAS, with a concentration in Business Information Technology, in 2016.

“When I came to Polk State, I was a student. I’m going to graduate as a business owner with a plan for what I’m doing with my life,” she said.

And what does that plan entail? Young envisions one day adding a sports management division to Young PR, and she would like to create a program to help get more African-American girls interested in careers in information technology. She is also making a name for herself as a public speaker. Her next speaking engagement will be at the Levels2This Business Symposium in Orlando in late October.

Whatever comes next, Young said, she will always consider Polk State the turning point in her life story:

“Polk State provided me with the nutrition I needed to be a better person and to have a name in my community.”

In addition to the Bachelor of Applied Science in Supervision and Management, Polk State offers bachelor’s degrees in Aerospace Sciences, Criminal Justice and Nursing.