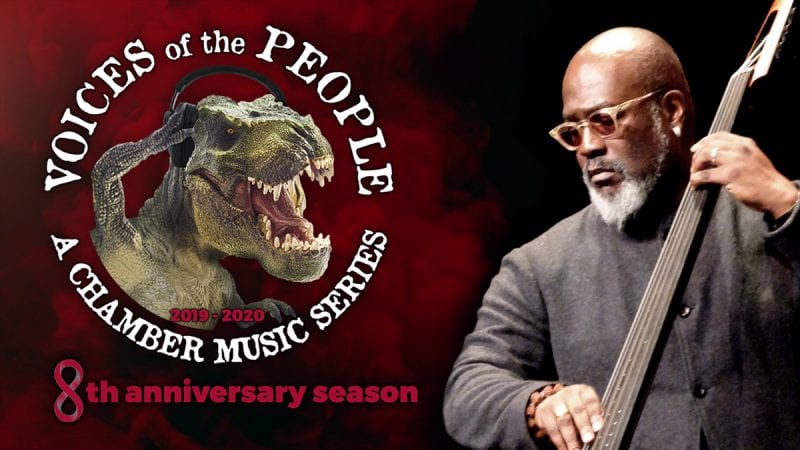 Polk State College’s Voices of the People chamber music series has kicked off its eighth year, “Time Keeps on Slippin’” with a diverse roster of artists and programs for students, faculty, staff, and the community to enjoy.

This season’s logo plays on the number eight, which in the shape of a moebius strip, represents the symbol for infinity.

“It is precisely then that we notice the relevance of the T-Rex DJ and the 1950s dancing couple,” explained Derek Menchan, Professor of Humanities and Music and founder of Voices of the People. “Millions of years separate the dancers from the Thunder Lizard, while less than 100 years separate the couple from the disc jockey equipment the Rex is using. The viewer is witnessing a four-dimensional phenomenon: time slipping from the distant past, through the present, and past the viewer toward the future.”

“It also embodies Blake’s famed observation that, ‘The nature of infinity is this: That everything has its own vortex,’” he explained.

As the series looks ahead to a new decade in 2020, Menchan reflects on the creation of the popular Voices of the People he calls a labor of love in which he brings “extraordinary” performances to Polk County.

“I was ready to fold up the tents and take the show down, permanently, a few years back,” Menchan said. “But while it is difficult, it is necessary to educate audiences for ‘classical’ music.”

Voices of the People does that and more.

This season will include series favorites including Menchan, trumpet player Shawn Edmonds, and  percussionist Marty Morell. Professor of Art Holly Scoggins will also join Menchan in a collaboration of painting and performing exploring “the mystical visions found in ancient Jewish lore and beyond.”

Menchan noted that the thought-provoking series transcends traditional entertainment by creating dialogue regarding the state of affairs in the world.

“I want to provoke, challenge, engage, and enlighten – sometimes even enrage,” he explained. “Not all art is meant to make us happy. Per Bebop, for instance, sometimes its philosophy highlights the inequities in many of our societal systems.”

Menchan remains true to the Voices of the People’s mission to create the next audience for “classical” music.

“Voices of the People brings internationally prominent musicians of color to Polk County, giving Polk State and the greater community the opportunity to experience world class performances,” he said.

The full season schedule is as follows.

Tearin’ the Roof Off!