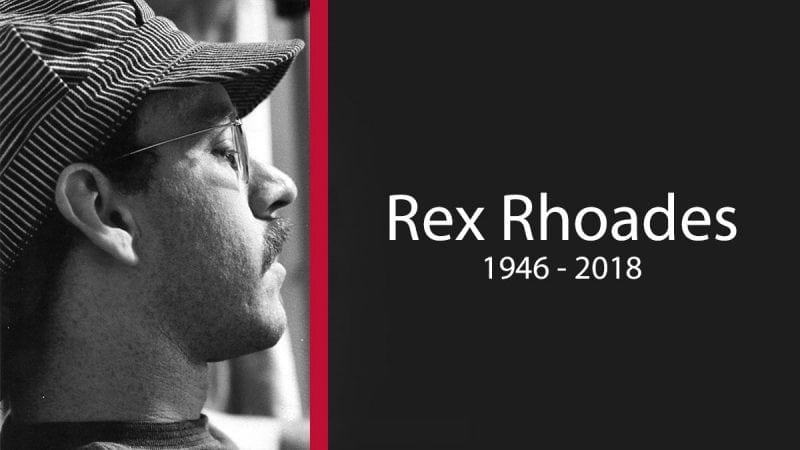 Rex Rhoades was the “go-to guy” for technical support in the Teaching Learning Computing Center (TLCC) on the Winter Haven Campus, always eager to lend a helping hand to students, faculty, and staff in need.

Rhoades worked at Polk State College for nearly 11 years, serving as a Teaching Lab Assistant before retiring on June 30, 2018. He passed away on Aug. 14 at the age of 71.

“Everybody knew they could count on Rex to have the answers. Students would line up at his desk before he came in at 12:30 p.m. because they knew he would be ready to help them,” said Summer Hicks, TLCC Testing Services Specialist who worked with Rhoades since 2007. “We feel his absence, but there is still a lot of his influence left here.”

Rhoades was born in Washington, D.C., in November 1946 to Taylor and Virginia Rhoades.

He shared many interesting life stories with his coworkers, including his time living abroad as a child while his father worked as a U.S. diplomat.

“He had a very rich life and was exposed to many different cultures,” said Barbara “Bunnie” Walworth, who works the front desk in the TLCC. “He was also an avid reader of all different kinds of material. He was always interested in learning new things and how things worked.”

“Everybody knew they could count on Rex to have the answers. We feel his absence, but there is still a lot of his influence left here.” — Summer Hicks

Rhoades also had a love for cats, pottery, growing orchids, and cooking, Walworth explained, recalling mushroom burgers he made for a group of friends: “It was the best thing I’d ever had.”

But at Polk State, Rhoades was best known for being tech savvy. He held a degree from the University of South Florida, and Hicks speculates that his interest in technology was sparked by the time in which he returned to school as a nontraditional student who had already studied Liberal Arts.

“He got back into school when technology was really taking off, and I think that was exciting to him,” she explained. “Rex always made sure that all of the equipment was working and that students had access to the things they needed in the TLCC.”

Chris Fullerton, Director of the Winter Haven Campus Library and TLCC, said even if a student had a question he didn’t know the answer to, he would take the time to figure out a solution.

“He was always the go-to for students because he would go that extra step to help them,” Fullerton explained. “If there was a student who had a project due and needed to put a video into a PowerPoint,  for example, they would go to him.”

“He was our go-to guy if we needed to know how something worked, whether it was something technical or the inner workings of the College,” Walworth explained. “He was patient, methodical, and would always help people learn something new. He was just an all-around good guy, and there were always students and staff at his desk to visit because he was simply a joy to be around.”

“He was patient, methodical, and would always help people learn something new.” — Barbara “Bunnie” Walworth

BJ Lewis, an Administrative Assistance in the Academic Affairs Office on the Lakeland Campus, served on hiring committees with Rhoades and described him as someone who was always eager to help.

“He was the go-to guy when you needed someone to get things done,” Lewis said. “He would always go the extra step, and I think that’s where I got that from. He showed us the importance of being the best professionals we could be.”

Rhoades did all of this while keeping a great sense of humor, his colleagues shared.

“He was quite intellectual, but didn’t take himself too seriously,” Fullerton said. “He was funny and always telling jokes to make people laugh.”

He was someone who kept smiles on everyone’s faces, Hicks said.

“He was always teasing us about something in a kind, light-hearted way,” she recalled. “He was always saying something funny, even when he wasn’t feeling well – right up until the end.”

And his influence on those he worked with extended outside the TLCC walls.

“He was part of my work family, but he was much bigger than that,” Hicks said. “He knew both of my children since they were babies, and they would make him birthday and holiday cards – he was just a sweet person who everyone loved.”

“He was always the go-to for students because he would go that extra step to help them.” — Chris Fullerton

Walworth recalls many movie nights Rhoades would host at his house for friends. He enjoyed entertaining – cooking dinner and selecting movies they’d never heard of, she said.

“Rex was a very good friend to all of us,” she added.

Rhoades is survived by his brothers, John of Rock Hill, S.C., and Bill of Raleigh, N.C., as well as their spouses and children. The family plans to hold a celebration of life in Winter Haven later this year. Memorials in Rhoades’ name may be made to Good Shephard Hospice, 3470 Lakeland Hills Blvd., Lakeland, FL 338805.