To have seen her present at last fall’s Polk State Honors Program Academic Showcase, where she seemed so comfortable on the stage, discussing biological sex determination, it would have been easy to assume Robin Savage knows exactly what she wants to do in life — and that those plans must involve a lab coat and microscope. 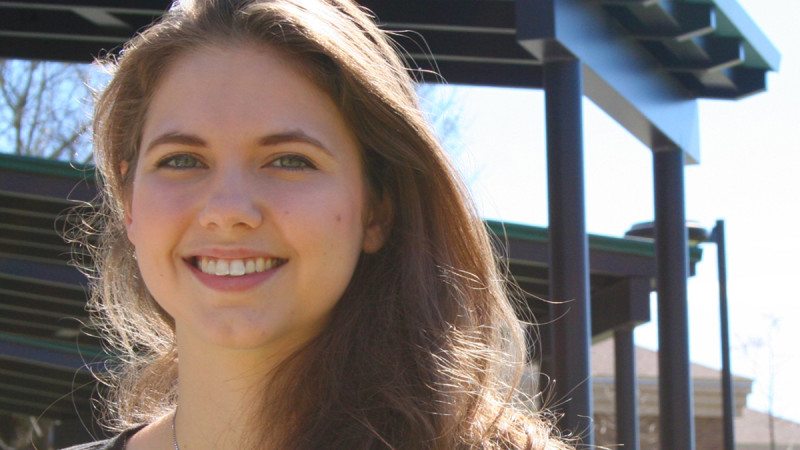 Come to find out, Savage is still deciding on what she’ll do next. Scientific research has its appeal. But, then again, so does helping deaf scientists to communicate.

Whatever she decides to do, she’ll do it with newfound confidence — which, as she explains, has much to do with her decision to study at Polk State College.

“I don’t think people realize how much there is to reap at Polk State,” she said.

Savage, a resident of Auburndale, graduated as valedictorian from Auburndale High School in 2011, and certainly could have gone straight to a major university.

Instead, she chose Polk State, swayed by its small class sizes and proximity to her home; Savage still lives in Auburndale, just a short drive from Polk State Lakeland, her primary campus.

With the dual enrollment and Advanced Placement credits she’d earned in high school, Savage thought Polk State would be a brief stop along her educational path. She’d finish her Associate in Arts in just a year, and then she’d be on her way.

“It wasn’t like any science class I’d ever taken before,” Savage said. “It was different mainly because of Professor Caldecutt’s enthusiasm. She was very interested in what she was teaching. I’d never gotten excited about science before.”

Savage decided to extend her studies at Polk State and complete all the prerequisites she’ll need to study Bioscience at the university level. Under Caldecutt’s supervision, she also began an independent study to learn more about the development of biological sex, a topic that had intrigued her so much in class that she couldn’t wait to learn more on her own.

In particular, Savage is interested in research that shows human gender is not as simple as “male” or “female,” but that it actually ranges along a continuum and is influenced by factors including genetics and environment. Her independent study has allowed her to learn more about the complexities of human sex determination, and she presented her findings at the Florida Collegiate Honors Council Annual Conference in February.

“My whole life, I had really structured experiences. To go about this independent study by myself, although I had guidance from my professor, was a big thing for me. It was challenging, intimidating and dizzying,” Savage said.

Caldecutt said Savage may have been the student during the independent study, but she certainly wasn’t the only one learning.

“Robin is a voracious reader and pulls a ‘Good Will Hunting’ about once a month, bringing a thoroughly digested pile of graduate-level textbooks or medical journals to my office. We share reading material back and forth, so the learning is certainly on both sides of the desk. Her independent study project has become a custom-built, graduate-level course for me as well,” Caldecutt said.

“Most educators seek to remain life-long learners, but without the occasional nudge, it can be easy to stagnate in the comfy armchair of the same course load year after year. I am truly grateful to Robin for providing me with the challenge and inspiration to dig deeper into subjects I love, and also for engendering the sense of collaborative spirit that makes learning so engaging and addictive.

Savage is also taking American Sign Language this semester at Polk State. Through her studies, she’s learned that there are no universal signs for many scientific terms — a situation that is frustrating for scientists and one she’s interested in possibly helping to resolve one day.

As she contemplates life after Polk State — which will come after she graduates in 2014 — Savage says that no matter what she does next, she will do it with a newfound sense of confidence that has developed through her leadership of the Honors Program Student Council at Polk State Lakeland.

A self-described “introvert,” Savage ran for president of the Student Council and was elected in fall 2011.

“I’d been thinking about getting involved in leadership, so I thought that’s where I needed to be,” she said. “I was extremely nervous to throw myself out there.”

The experience of leading the chapter has changed her in ways that can’t be undone, she said.

“I am introverted, that’s just the way I am. I’ve learned, though, that people have different leadership styles. Some people are very enthusiastic and others, like me, are observers — but we will speak our minds when we need to,” she said.

“As a leader, Robin is true to her quiet nature by relying on making personal connections when welcoming others into the Honors Program. She makes a great effort to be sure that people know they are wanted, needed and appreciated,” she said.

“There are so many caricatures of different leaders; Robin is a person who leads quietly, by example, and through service to those who have selected her.”

Savage is the type of leader who inspires others to be their best, added Kylie Shortt, a Lakeland resident and vice president of the Polk State Lakeland Honors Program Student Council.

“She is a great leader. She is so motivated and dedicated and very encouraging. She enjoys helping others and is very positive. I would say she is amazing,” Shortt said.

It’s that kind of leadership that will make Savage hard to replace — no matter where she goes or what she does after Polk State.

The Polk State Honors Program offers smaller, more rigorous classes, field trips, priority registration, and numerous scholarship opportunities. To qualify for the program, students must meet certain GPA requirements or score highly on tests such as the ACT or SAT.