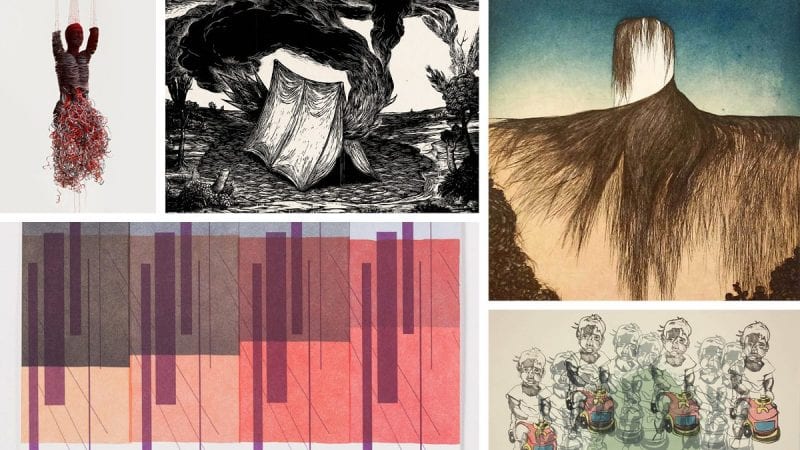 A distinctive exhibition is currently on view at the Polk State Winter Haven Fine Arts Gallery. “Printmaking Invitational: A Survey of Printmaking Techniques From Across the Globe” showcases the unique art of printmaking, exposing the breadth and scope of its capabilities as an art medium.

Holly Scoggins (Artist and Professor of Art at Polk State College) and Jessica Augier (Artist, Printmaker and Faculty Liaison at the New York Academy of Art, NYC) will curate the exhibition. It will feature artists who were hand selected to showcase their work. Over thirty artists from around the nation will display more than 50 works of art highlighting the breadth of ability and application. Notable artists showcasing their work include:

“From Canada to Chicago, California to Orlando and New York City, these artists are some of the best working contemporary printmakers,” said Holly Scoggins. “This is a one-of-a-kind exhibition as this group of artists and artworks have not been shown together before now.”

Printmaking refers to the original creation of an artist who, instead of a paintbrush or camera, has chosen printing tools as a means to make images through various techniques of multiplication.  Traditional printmaking has had a long history of experimentation and discovery: Japanese woodblock rubbings in the 8th century, European printmakers during the Renaissance, the 19th century artists who first began to print and sign limited editions of their work, and the digital innovations of the 21st century.

This educational exhibition aims to expose both students and the community as a whole to all aspects of traditional and non-traditional printmaking while emphasizing technique and surface quality of the paper. The exhibition will feature a large variety of examples (Relief, Intaglio, Screen-printing, Letterpress, Lithography, Monotype, etc.) from printmaking artists around the world.

“We hope this exhibit will educate our community about the possibilities of printmaking,” Scoggins said. “I really want to energize an interest in printmaking at Polk State College.”

While Polk State offers a wide range of fine arts classes, printmaking is not one.

“Printmaking classes are not currently offered at Polk State,” Scoggins said. “This exhibit offers us a chance to inform students about printmaking so that when we develop the class in the near future, they know exactly what it is. Any student who has been exposed to the Drawing II class has had a small glimpse into printmaking through various assignments.”

The Arts programs include Music, Theatre, and Visual Arts. In addition to academic studies, each area of The Arts offers students numerous performance and exhibition opportunities throughout Polk County.