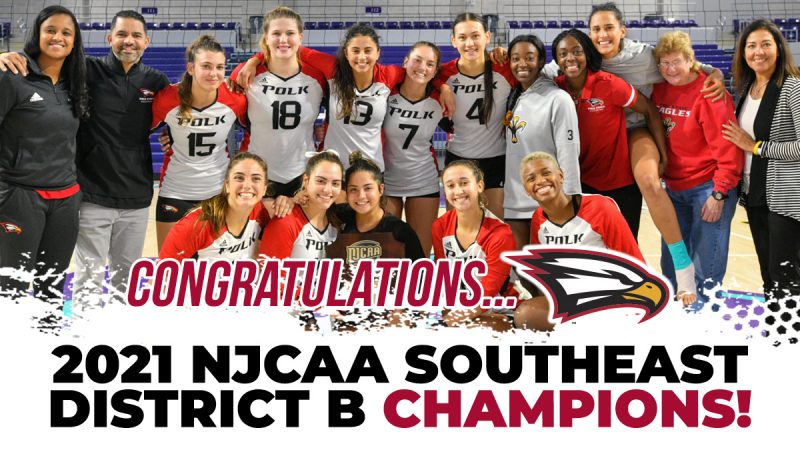 Polk State Volleyball will travel to the National Junior College Athletics Association (NJCAA) Division I Volleyball Championship in Hutchinson, Kansas, next week to face off against the top teams in the nation.

The team’s success, under the leadership of Coach German Del Valle and Assistant Coach Dayanna Barbosa, can be attributed to the athletes’ skills and shared values of hard work, perseverance, and heart.

“This group has the best team chemistry in the history of the program,” stated Del Valle. “These athletes may have a tough loss or injuries, but they never quit or give up.”

Del Valle credits the leadership of Team Captain Elly McInerney and support of returning sophomores Valentina Bahamon and Morgan Madasz for showing their dedication to the sport and commitment to putting in the work on and off the court.

This resilience has been demonstrated throughout their season, which consisted of 11 wins and 12 losses, and culminated in their performance this past weekend at the NJCAA Division I Southeast District Tournament.

Polk State sophomore Kaila Ru led the team with a strong performance, successfully blocking the Bucs and maintaining momentum that turned the tide of the match beginning in the second set.

“We knew we were capable of doing this,” said Ru, “and we weren’t leaving the arena without a win.”

The win against the Bucs sent the Eagles on to the Florida College System Athletics Association (FCSAA) State Championship Game where they were defeated by #4 Miami Dade College (MDC) but as runners up, earned an opportunity to compete for a spot at nationals.

The Eagles successfully defeated Spartanburg Methodist for the NJCAA Southeast B District Championship even with some of their most seasoned players relegated to the bench due to injuries.

“We were so excited to have the opportunity to help the team get to nationals,” said Barries, “we brought a lot of energy to the match, and I think that’s what gave us the win.”

Del Valle concurred, “this game was all about the energy. These women stepped up and made it happen. I am very proud of their accomplishment.”

This is Del Valle’s 10th year with Polk State, and his seventh trip to nationals with the Eagles.

Polk State College will celebrate the Eagles’ trip to nationals with a pep rally scheduled for Monday, November 15, at 1 p.m. in the Winter Haven Health Center (WHC) on Winter Haven Campus.

The 2021 NJCAA Division I National Volleyball Championship will be November 18-20 in Hutchinson, Kansas, and will be streamed live. The College will post information about how to watch on the Polk State College Facebook pages.