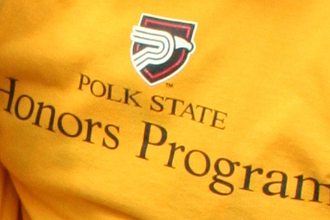 The hard work of Polk State Honors Program students was on display Friday during the Fall Academic Showcase.

Each semester, students in the Honors Program present work they’ve completed either for class or simply out of personal curiosity, sharing what they’ve learned with friends and family members, Polk State Honors Program faculty, and College administrators.

Polk State Vice President for Academic and Student Services Kenneth Ross congratulated the students on their work and taking the extra step of presenting at the showcase.

“Don’t forget about Polk State College 10 or 20 years from now. Maybe some of you will come back and be Honors faculty for us to instill in future students the great things that have been instilled in you through the Honors Program,” he said.

Among the students making presentations:

Polk State Honors Program Student Council President Ryan Darley emceed the event and summed all of the presenters up with this: “These students are the best and brightest of Polk State.”

According to District Dean of Academic and Student Services Patricia Jones, who works with the Honors Program, the Fall Academic Showcase capped a busy semester for Honors students. Honors Program students recently traveled to the National Collegiate Honors Conference in Boston, a first for Polk State College. They also recently participated in field trips to the Charles Hosmer Morse Museum of American Art in Winter Park and The Mosaic Company, where they hunted for fossils in a phosphate mine.

To qualify for the program, students must meet certain GPA requirements or score highly on tests such as the ACT or SAT. Graduates of the program have completed at least 18 credit hours with the Honors Program designation. Graduates receive the Honors Program designation on their transcripts and diplomas, as well as recognition during commencement.