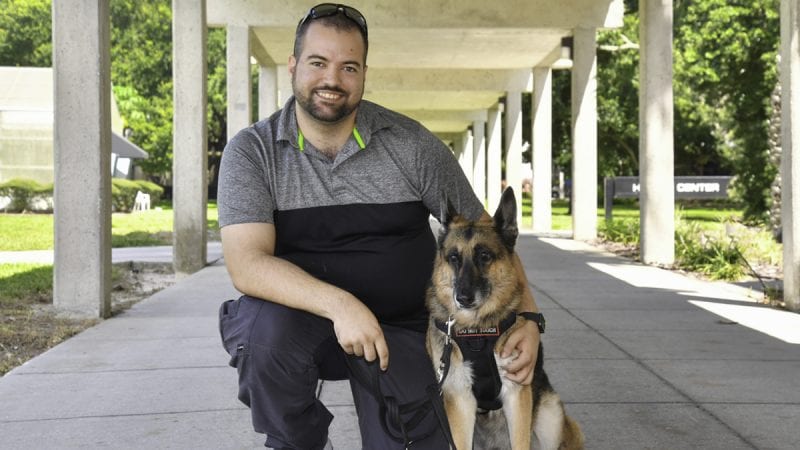 While Allen Nash, like many students, credits extraordinary faculty and staff for helping him along his Polk State College journey, he also has a furry, wet-nosed friend with a docile demeanor to thank.

Nash and his German Shephard, Bridget, have been inseparable since he enrolled at Polk State in 2009 when Bridget became his service dog to calm his anxiety. He achieved his Associate in Arts degree in 2016 and walked the graduation stage with Bridget – matching caps and all.

Now Bridget can tout that she, too, is a Polk State alum.

The Polk State District Board of Trustees and President Angela Garcia Falconetti honored Nash and Bridget during the Board’s August meeting, where Bridget received a certificate of recognition for service from the College as she nears retirement after 10 years.

“She went to every class with me and even walked with me across the stage during graduation,” Nash said. “It means a lot to have something to show for her service and help over the years.”

Nash explained that the classroom setting sometimes triggered his anxiety. Loud noises and quick movements can distract him, but Bridget has always been there to offer him a comforting nuzzle and a reminder to refocus.

The Office of Disability Services worked closely with Nash to ensure that he had the assistance and accommodations he and Bridget needed, from coordinating with professors and his peers to ensure everyone was comfortable in the classroom, to giving Nash a quiet, distraction-free space to take exams.

Bridget’s presence on campus was always well-received, he said, adding that her leash serves to put peoples’ minds at ease.

“In any place where people aren’t used to seeing a dog, I’ll get one of two reactions: They’ll think she’s cute and want to pet her, or they’ll be scared and stand-offish because German Shepherds are viewed as police dogs,” Nash said. “But she won’t leave my side.”

Bridget has now taken on a motherly role to 3-year-old Shadow, a German Shephard who will become Nash’s next service dog, as Bridget prepares to go into full pet mode. Nash, who worked part-time in Information Technology at the College, now serves in IT at Quality Labor Management in Sanford while he works on a bachelor’s degree in IT with a focus on cybersecurity online through Western Governors University.

The foundation he received at Polk State has put him on a path to achieving his goal of working in penetration tracking, or “hacking for good,” he said, extending thanks to Office of Disability Services Director Kim Pearsall, Professor of Mathematics Penny Morris, and TRiO Transition Specialist Linda Sherwood for their support during his time at the College.

“My advice for students is to not be afraid to ask for help,” Nash said. “Go to your professors and staff when you need it – they will help you to keep going.”

Note: Bridget passed away September 21 and this article serves as a remembrance of her years of service.