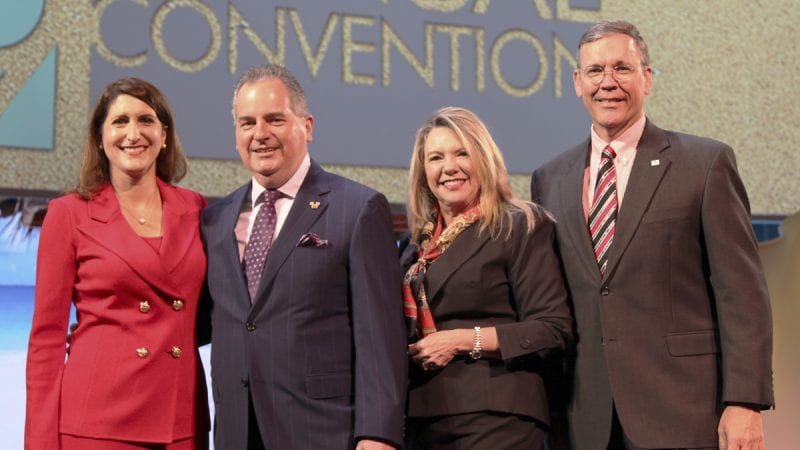 Walt Disney World Resort President George A. Kalogridis is the first Polk State College alum to receive the American Association of Community Colleges (AACC) Outstanding Alumni Award for his positive impact on the community, the country, and the world.

Kalogridis accepted the award Tuesday, April 16, in Orlando during the AACC’s 99th Annual Convention, where he shared that Polk State College laid the foundation for his success.

“A community college is an extremely local door to an entire world of opportunities,” Kalogridis said. “I am grateful for the education I received at Polk State College, and I’m honored to be an alumnus of such a dynamic institution.”

Walt Disney World was preparing to open in 1971 when Kalogridis graduated from Winter Haven High School. He bussed tables at Disney’s Contemporary Resort to pay for classes at what was then Polk Junior College, which allowed him to stay close to home and save money for his education.

“Polk taught me that dreams really do come true—a concept that played in remarkable harmony with my day job at ‘The Most Magical Place On Earth,’” he said.

“A community college is an extremely local door to an entire world of opportunities. I am grateful for the education I received at Polk State College, and I’m honored to be an alumnus of such a dynamic institution.”

Kalogridis received his Polk State Associate in Arts degree in 1973 and a Bachelor of Arts in Sociology from the University of Central Florida in 1976, going on to hold several prominent positions with Disney, including chief operating officer for Disneyland Paris Resort and president of Disneyland Resort in California.

The 48-year veteran of the company has served in his current role at Walt Disney World Resort since 2013 and oversees 75,000 Cast Members at four theme parks and 28 resort hotels in the world’s premier vacation destination. Through his visionary leadership, Walt Disney World Resort has experienced unprecedented growth of both attractions and philanthropy.

His success as a businessman is paired with a heart for giving back to the community. Kalogridis has served as an active volunteer throughout his career and currently sits on the boards of Orlando Economic Partnership Governors Council, the Florida Council of 100, and onePULSE Foundation. Additionally, in the last year, Walt Disney World has contributed more than $34 million to charitable causes and Cast Members have logged more than a quarter million hours of service to the community as Disney VoluntEARS, a program Kalogridis is passionate about.

“Polk State College is incredibly grateful to Mr. Kalogridis for his continued support,” Falconetti said. “He inspires our students to not only strive for success but to also give back to their communities and colleges that supported them along their journeys to success. This is a characteristic embodied by truly outstanding alumni.”

Kalogridis was one of three recipients of an AACC Outstanding Alumni Award, recognized alongside Hubert “Charles” Ahovissi, founder of nonprofit African Culture Connection and graduate of Metropolitan Community College in Omaha, Nebraska, and Kelly Suter, who received a degree from North Central Michigan College and most recently served as a medical coordinator in Ethiopia and an Ebola treatment unit clinical director in the Democratic Republic of Congo.

“Community colleges shape the lives of millions of students, no matter their background, helping them reach their educational and career goals. The AACC Outstanding Alumni Awards honor just a few of those students who left our institutions and went on to make an impact on the world,” AACC President and CEO Walter G. Bumphus said. “This year’s Outstanding Alumni are as diverse as community colleges. From a successful businessman to a selfless health care worker, to an immigrant sharing his culture with the Midwest, these alumni are truly deserving of the term ‘outstanding.’”