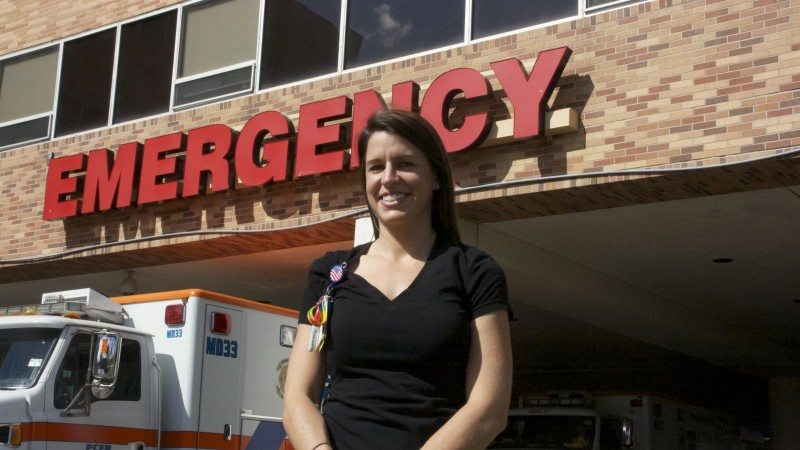 Renee Heacock is a graduate of Polk State and a nurse in the emergency department of Lakeland Regional Medical Center.

For Heacock, “the moment” came on a Fort Myers soccer field and led her to play for Polk.

Now, in her work as a Registered Nurse at Lakeland Regional Medical Center, Heacock makes moments count for her patients, comforting them when she doesn’t have to, reassuring them when they need it most.

“I just always ask myself, ‘Would I want my nurse to treat me like this?’” said Heacock. “It’s about treating others like you would want to be treated.”

Heacock, 25, a resident of Lakeland, grew up playing soccer in Titusville, defending against the opposing team as a stopper and loving every second of the game.

As high school graduation approached, however, Heacock figured her playing days were done.

During the State Cup in Fort Myers, where Heacock was playing with her club team, her post-high school plans began to change — and it all started with one conversation with former Polk soccer coach Bill Read.

“He walked up to me and asked me where I was going to play the next year,” she said. “I ended up getting a full scholarship and finding a great place to go to school.”

Read, who was at the State Cup to recruit, said he recognized in Heacock that special blend of attitude and athleticism.

“She was tenacious and had a lot of spunk,” Read said. “She’s a great girl who always worked hard.”

Even if it hadn’t been for the impressive records and titles, the time spent at Polk State would still hold a special spot in Heacock’s heart, she said.

“It was really easy to transition to Polk. There were maybe 30 students in a class, and if you needed to ask your professor a question, you could do it right there in class,” she said.

“We had soccer practice every day. Coach Read was really laidback and calm. He wanted us to play but also love the game.”

When she completed her Associate in Arts, Heacock planned on staying at Polk to continue in a Health Sciences field, but the chance to play her game for a bit longer lured her to Florida Southern College.

While there, Heacock was named Second Team All-South by the National Soccer Coaches Association of America, becoming the first FSC defender to earn the honor.

It was also at FSC that she decided to study nursing, a challenging, exciting, fast-paced field full of opportunities.

She graduated with her Bachelor of Science in Nursing from FSC in 2010 and went straight to work in the emergency department at LRMC.

In the years since, she’s developed a reputation as a nurse who makes time to give a little extra to her patients — even despite her stressful, nonstop surroundings.

“We work in a very fast-paced environment, but she manages her time very well,” said Sara Neu, a nursing supervisor at the hospital. “She’s able to multitask so that she can spend more time with her patients.

While her patients certainly appreciate any extra attention Heacock can give, she gets something out of those interactions, too.

She recalled recently taking a few extra minutes to comfort an elderly woman who had fallen and injured her neck.

“She was just sitting in this room, all by herself. She didn’t have any family with her, and she wasn’t wearing a wedding ring, so I didn’t expect a husband to come,” she said.

“I don’t usually have much time to just sit and talk to patients, but I did that day. We talked for 20 minutes about her cats. Being able to see her smile while she was there, and seeing her be so distraught but then able to calm down and relax, it was really great.”

Heacock is newly engaged to a minor league baseball player. She plans on working as a traveling nurse in the near future to be near her fiancé.

Wherever she goes, she said, she’ll never forget Polk — and all the special moments she had here.

“If anyone ever asks me about Polk, I’m like, ‘heck yeah, go to Polk.’ It was a really good time in my life.”