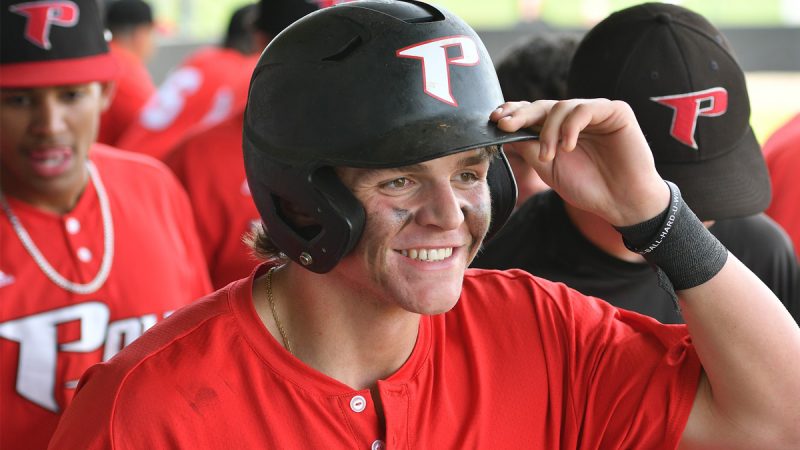 Last year, Nick Collins struggled at the plate. This year, opposing pitchers struggle to keep him off base.

Collins has crushed the ball, hitting .335 and leading the state (NJCAA Region 8) in RBI with 48. Quite a change from a pandemic-shortened 2020 season when he hit .219 with six RBI.

How did this happen?

“He’s always had raw power and a great work ethic, and he’s grateful for the opportunity to be playing,” Head Coach Al Corbeil said. “Getting it to all synch up together was the project. He got off to a slow start this season and we talked about his approach and presence in the batter’s box.”

“Once he started standing taller and holding his hands higher, then everything just clicked and came together at once,” he added. “Since then he’s never looked back, and now he’s one of the most productive hitters in the state.”

Collins, who leads the Eagles in doubles (15), and home runs (7), says another key to this year’s success is not physical but mental. He’s learned to relax and trust his ability to hit.

“My mindset is don’t try to do too much here. Just let it work. I’m going to hit the ball where it’s pitched. If the pitcher throws it outside I’m going to bang it the other way, but if he throws it in I’m going to turn on it,” he said. “If there’s a runner on third and less than two outs, I’ll just try to hit a ground ball to second,  get the run-in, and get an easy RBI.”

An example of that approach came in a recent game against State College of Florida. With the score tied and the bases loaded in the bottom of the eighth inning, Collins saw a 1-0 pitch over the outside of the plate and went with the pitch, lofting a fly ball to left field that scored the game-winning run and moved the Eagles into a tie for second place in the Suncoast Conference.

One way to learn, of course, is to see what works for other hitters. In doing so, Collins studied one of the best, Hall of Famer Jim Thome, who slugged 612 career home runs.

“I looked at his swing in the fall and that’s when I made the adjustment of putting my hands a little higher and just trying to emulate the kind of swing he has,” he said. “I look at him and see a little bit of similarity.”

Collins, who has a year of eligibility left, plans to return next year.

“I love the environment at Polk State,” he said. “The message the coaches try to send is to be there for your team, to try to make something good out of all this, and to make it a good life experience.”

“I love the selflessness and the competitiveness of our team,” he added. “We have a certain grit to our program, and I really enjoy being part of it. I wouldn’t want to be anywhere else playing right now.”

“I’m just trying to help the team and be a good teammate. That’s what I worry about every day,” he said. “I worry about the small things and try to be there for every guy and make sure everybody’s on the same page.”

“Being the DH gives me an opportunity to be in the dugout and make sure everybody’s involved in the game and keep our defense on its toes,” he said.

“I’m grateful to have that opportunity to be in the dugout. I can do a lot of things while I’m there instead of just thinking about my next at-bat. Whether I strike out or get a hit, the game moves on. I try to move on and keep the energy up in the dugout and be there for everyone else.”

And speaking of moving on, Collins aims to get selected in next year’s MLB draft and play professional baseball. Hitting the way he does, he seems likely to reach that goal.