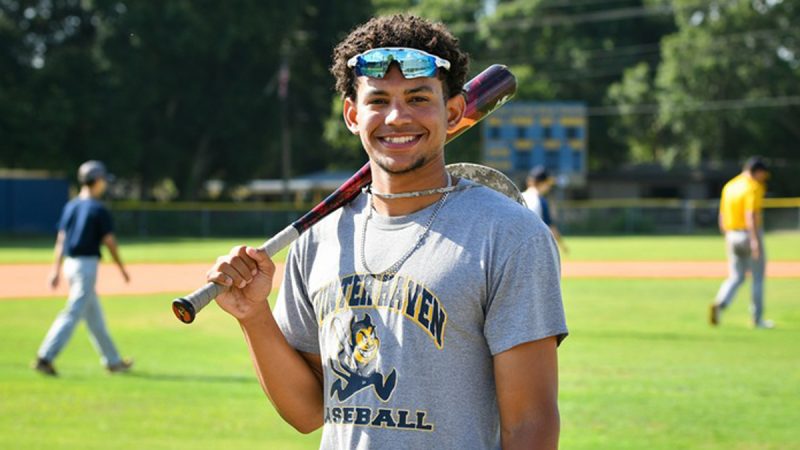 Rohsean Riley believes in giving back. And paying forward.

So instead of playing golf or relaxing by the pool this summer, the Polk State sophomore volunteers as a coach for the Winter Haven High School baseball team.

“I played at Winter Haven for four years, and Coach David Schafer is really close to me,” says Riley. “He asked me to come out and help him with these kids and try to get them better. He likes to have players at the next level come back and give some advice, so that’s what I’m doing.”

“This is an American Legion league that runs until the end of July, so I’ll be out here basically all summer,” he says.

The team includes varsity and junior varsity players along with some incoming freshmen.

“I let them know first of all that they need to get their schoolwork done,” says Riley.

“That’s the most important thing because you can’t play in college if you don’t have the grades. I preach that a lot. I tell them they’re student-athletes, and student comes first.”

Although he has an easygoing personality, Riley knows he has to hold players accountable.

“The kids take it easy on me, but of course I have to get on them at times. If any guys start slacking off, you gotta put the foot down and let them know, ‘Hey, we’re here to make you better, not to be your friend.'”

In his freshman season at Polk State, Riley hit .282 with five home runs and 43 RBI in 55 games. That experience, and those numbers, give him credibility when he tells players how to follow in his footsteps.

“The main thing we want to do here in the summer program is to get them prepared for the next level. We try to make all our workouts as close as possible to college workouts. We want to get them used to it so that when they go on to the next level it’s not going to be so hard on them.

“We also want to get their endurance up because they don’t have a long season like we do in college, so we like to get them prepared so they’re pretty much fresh all through the season.”

The ancient Roman philosopher Seneca the Younger said, “While we teach, we learn. ” And while in no way ancient, Riley agrees.

“Definitely,” he says. “I honestly believe that doing this coaching thing will also help me as a player. Sometimes I’ll preach stuff to the kids that is in the back of my head but that I don’t even think of right away, so it helps me practice what I preach. It definitely helps me as a player.”

Coaching has also given him a look at a possible career option.

“I obviously want to play as long as I can, but at some point down the road I could definitely do this,” he says.

“This goes beyond baseball. I believe it translates into what kind of person you are in life. If these kids put the work in here, then down the road they’ll work harder at whatever they do in life.”